Photo sharing service Flickr had an image with EXIF data revealing HTC One to be imminent soon.

An image has been spotted at the photo sharing service Flickr which has been clicked using the ‘HTC One’ handset. The image’s meta data reveals that the HTC One handset will have f/2.0 aperture. The actual resolution of the image sensor could not be derived from the image. 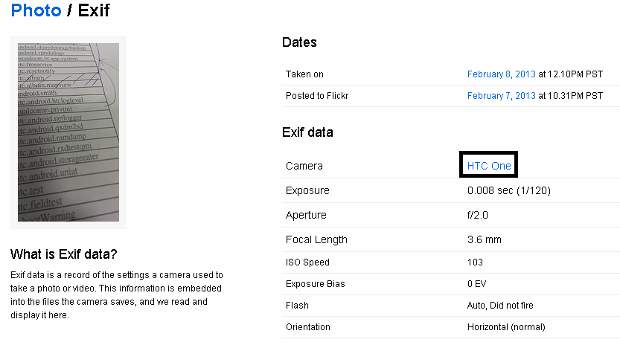 HTC is rumoured to launch the handset on February 19. Also referred with the codename HTC M7, the HTC One is expected to arrive with a new camera feature likely to be labelled as Ultrapixel. The purported HTC One smartphone will feature 4.7-inch Super-LCD 3 Display supporting full 1080p HD resolution and will pack a 1.7 GHz quad-core Qualcomm mobile processor inside. Android Authority spotted a photo on Flickr service and the image’s meta data revealed that it was taken using HTC One.

According to earlier reports, the new HTC One is to come with a new camera technology called Ultrapixel. It is basically a pack of three 4.3 megapixel sensors stacked on top of another to form a 13 megapixel camera. Thus all three sensors will capture an individual layer of the image and then three layers will be merged to form a cleaner, sharper and better looking final picture.

The HTC One is rumoured to pack Android 4.1 Jelly Bean update with the new Sense 5 user interface from HTC. We are more than interested to see if HTC finally announces its personal assistant service this year or not.