For the camera department, the HTC Desire 12 will feature a 12-megapixel rear-facing camera that can shoot 1080p Full-HD videos.

Recently, it was reported that HTC is working on a budget smartphone – HTC Desire 12. Now a retail box of the Desire 12 has surfaced online, which has revealed the smartphone’s key specifications.

As per the leaked retail box by Android Authority, the HTC Desire 12 will feature a 5.5-inch HD+ display with a resolution of 1440 x 720 pixels and an aspect ratio of 18:9. It will be powered by 64-bit quad-core MediaTek processor coupled with 3GB RAM. It will have 32GB internal storage and a microSD card slot to further expand the phone’s storage capacity by 2TB. 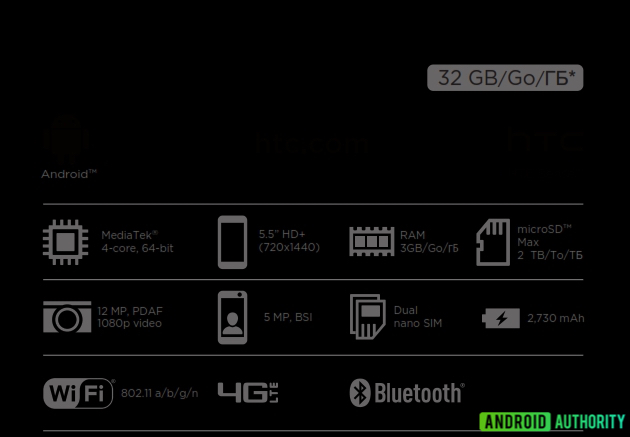 For the camera department, the HTC Desire 12 will feature a 12-megapixel rear-facing camera that can shoot 1080p Full-HD videos. For the front, there will be a 5-megapixel front-facing camera for selfies and video calling.

The operating system is not revealed by the leaked retail box, however, it is expected that it will come with Android Oreo onboard. It will be powered by a 2,730mAh battery. Connectivity features will include dual sim, 4G LTE, Wi-Fi a/b/g/n, Bluetooth and GPS.

(Disclaimer: Lead image is for representation only)