Honor to launch a flagship smartphone on June 27, could be Honor 9

The smartphone is expected to have a dual rear camera setup with Dual LED flash.

Earlier we have seen alleged images of Honor 9 in Black, Blue, and Light Purple colour options, which has given us a rough idea about phone’s looks and design. Now a new tip about its launch date has been doing rounds on the internet. According to a new tip from a famous tipster, Roland Quandt‏ (@rquandt) Huawei’s sub-brand, Honor will be launching its new flagship device on June 27th in Berlin, Germany, which might be none other than Honor 9 (could be launched as Huawei Glory 9 in China). 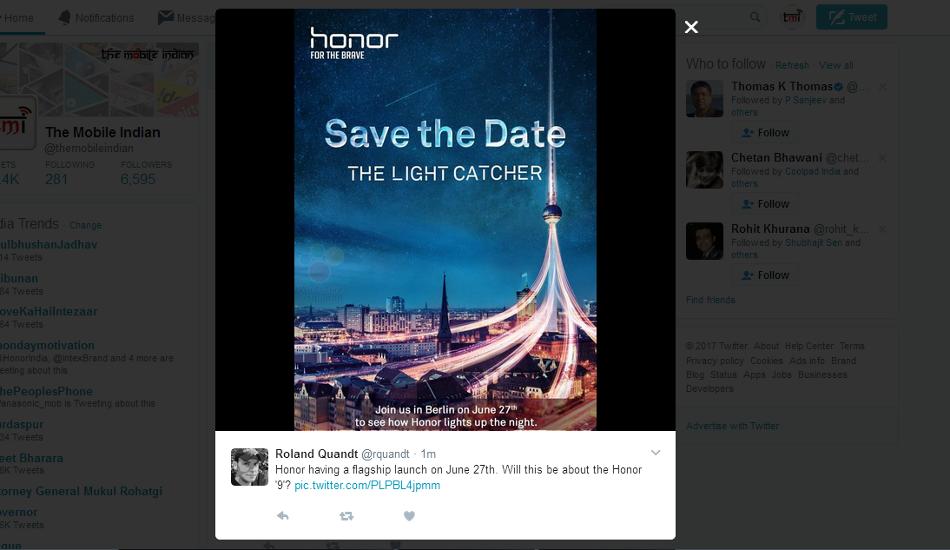 Based on the earlier image leaks, thecompany seems to ditch 3.5mm headphone jack and will instead feature a USB Type-C port. Further, this set of images re-confirms the dual rear camera setup with Dual LED flash as well.

The major visible change according to leaked images is the placement to fingerprint scanner which looks like it is embedded in the home button meaning that company will simply ditch the ‘Smart Key’ feature, which was present in ‘Honor 8’, wherein the home button doubled up as a smart key to click picture or to launch any app. The fingerprint scanner was placed on its back panel on its predecessor.Moreover, one can clearly see the dual rear camera setup along with laser autofocus and dual-LED flash and on the front, there is a secondary camera which might have a similar megapixel count as seen in the Honor 8.

It has a dual rear camera setup – both the cameras are of 12-megapixel resolution (monochrome + colour). A dual-tone LED flashlight is on the back too. The primary rear camera has f/2.2 aperture and Laser AF. In its front lies an 8-megapixel shooter with f/2.4 aperture has been provided for selfies. The Honor 8 also comes with a fingerprint scanner which is located on its back panel. It has USB Type-C port and an Infrared sensor as well. Besides, the smartphone has a Hybrid Dual SIM tray, 4G LTE, WiFi (IEEE 802.11 a/b/g/n/ac, Hotspot up to 8 devices), Bluetooth 4.2, GPS, Accelerometer, Ambient Light Sensor, Proximity Sensor, Infrared Sensor, Compass, Gyroscope, and NFC . The handset measures 145.5 x 71 x 7.45 mm.