Holly 3 is now available on Flipkart for purchase with the discounted pricing.

Honor, Huawei’s smartphone e-brand launched Honor Holly 3 2GB for Rs 9,999 in October 2016. Later Honor launched a new variant of the Holly 3 smartphone in India with 3GB RAM for Rs 12,999. Now the smartphone price has been slashed in India up to Rs 5,500, after which Holly 3 2GB variant is priced at Rs 6,499 while the 3GB variant is priced at Rs 7,499. Both the variants are now available on Flipkart with the discounted pricing. 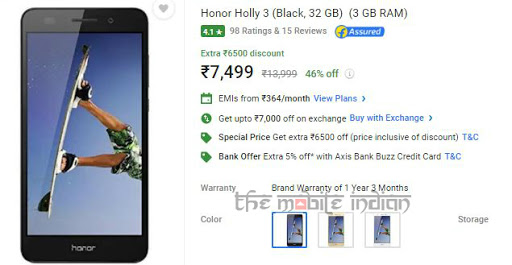 As far as specifications of the smartphone are concerned, the Holly 3 comes with a 5.5 inch HD display. This 8.45 mm sleek handset weighs 168 grams with a 3100 mAh battery. The phone has the Android Marshmallow operating system and EMUI 4.1 user interface. The octa-core Kirin 620 processor, which boasts maximum clock speed of 1.2 GHz runs this phone with 2GB/3GB RAM. 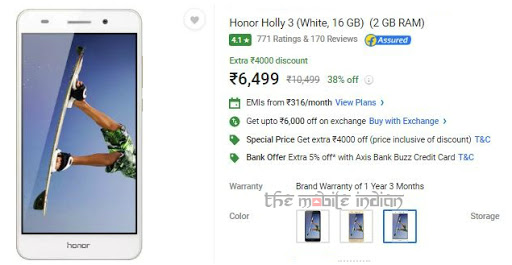 The Holly 3 offers 16GB/32GB of inbuilt storage and has a 128 GB micro SD card slot too. It has a 13-megapixel rear camera that has BSI CMOS sensor with F2.0 aperture and its 8-megapixel front camera also has F2.0 aperture.