The smartphone boasts a metal unibody design and the major highlight of the smartphone is the dual rear cameras.

Huawei’s sub-brand Honor launched Honor 8 Pro smartphone in India in July for Rs 29,999. Now ahead of the festive season, Honor 8 Pro price has been slashed by Rs 3,000. The smartphone is now retailing at Rs 26,999 and is available for purchase exclusively on Amazon India. The smartphone comes in Navy Blue and Midnight Black colour variants on Amazon. 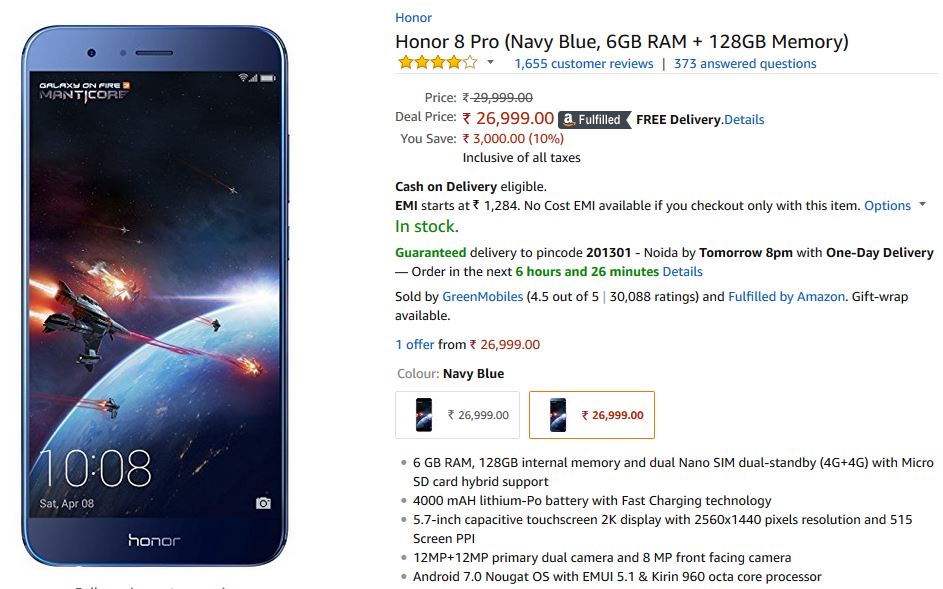 The smartphone boasts a metal unibody design and the major highlight of the smartphone is the dual rear cameras. The camera comes with a combination of 12-megapixel sensors with one being used to capture RGB, while other captures details in monochrome. The smartphone also supports 4K recording at 30 frames per second and comes with an 8-megapixel front camera for selfies and video calling.

As per the specifications are concerned, the device features a 5.7-inch QHD LTPS LCD display with a screen resolution of 2560 x 1440 pixels and a pixel density of 515ppi. The device is powered by company’s in-house Kirin 960 octa-core processor and is backed by a 6GB of RAM and 128GB of internal storage, which can be further expanded up to 128GB via microSD card slot. The device runs on Android 7.0 Nougat and is juiced by a 4000mAh battery. On the connectivity front, the smartphone support 4G, Wi-Fi 802.11 a/b/g/n/ac, Bluetooth 4.2, dual-SIM, infrared sensor and measures 157 x 77.50 x 6.97 mm and weighs 184 grams.