Honor 20 series to be launched on May 21

Honor might introduce three models at the launch event including Honor 20 Pro, Honor 20i and Honor 20 Lite.

Huawei’s sub-brand, Honor, has announced that it will be launching its latest Honor 20 series on May 21, 2019. The company has started sending out media invites for the launch event, which is scheduled to take place in London.

The invite shows the famous Tower Bridge in two different modes meaning that the upcoming series will be equipped with better daylight as well as low light performance. If we go by the past leak than Honor will introduce three models at the launch event including Honor 20 Pro, Honor 20i and Honor 20 Lite. All three smartphones have been leaked in the past, which gives us the fair idea of the upcoming series. 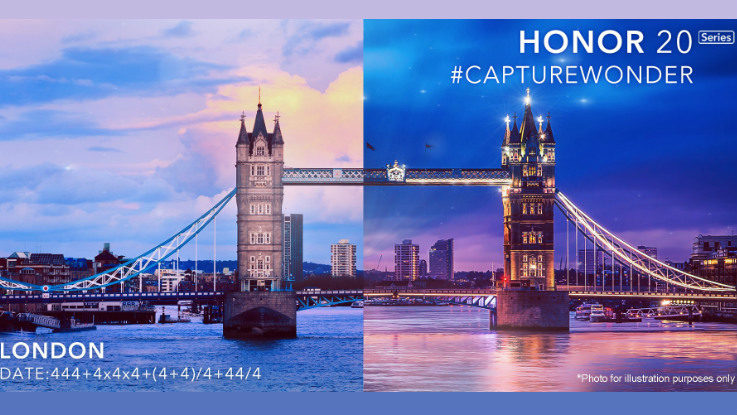 Starting with the top-end model, the Honor 20 Pro is reported to be equipped with a 6.1-inch Full HD+ OLED display and there will be a dewdrop notch as well. The phone is reported to be powered by the flagship HiSilicon Kirin 980 processor along with Mali G76 GPU. The major highlight of the smartphone will be none other its triple-camera setup at the back panel.

The Honor 20i is reported to be unveiled on April 17 in Beijing. The phone is said to feature a 32-megapixel shooter and it is said to be powered by a Kirin 710 chipset. Apart from this, the phone is reported to be loaded with 6.21-inch Full HD+ display with a dewdrop notch. Lastly, the Honor 20 Lite is reported to feature a triple-camera setup with a combination of24MP f/1.8 sensor, an ultra-wide 8MP camera with a 120-degree viewing angle and a 2MP depth sensor. It’ll also equip the same 32MP selfie sensor on the front with a teardrop notch and a 3400mAh battery.