The company is expected to announce on when Nokia's phones can be expected in India.

HMD Global seems to be all set to unveil Nokia’s roadmap for the Indian market next week. The company has started sending out media invites for a meet scheduled to take place on May 8, 6 PM onwards in New Delhi, where the company is expected to announce on when Nokia’s phones ‘Nokia 3, Nokia 5, Nokia 6 and Nokia 3310’ can be expected in India.

Surprisingly last month, Nokia 3310 was even found listed on one of the Indian online retailer ‘Onlymobiles’ as well. As per India listing the Nokia 3310 is priced at Rs 3,899 and pre-order will kick start from May 5. However, HMD India PR Team reportedly denied any listing of Nokia 3310 for sale on any of the website, even called it too premature to comment, as they are still working through some of its plans. 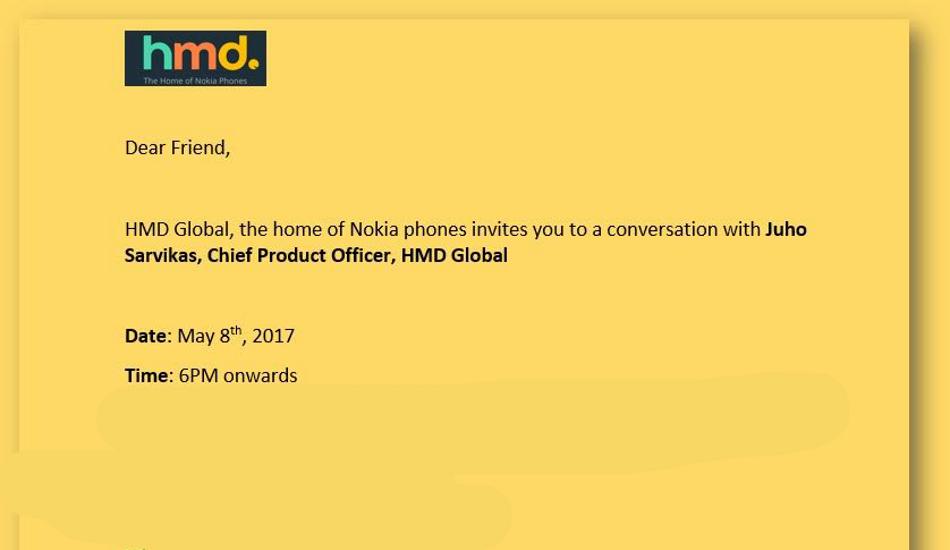 Earlier, Nokia 3310 found listed for pre-order in Germany and Austria via some retailers along with the release date of April 28, 2017, which was later changed to May 26. And then followed by all four Nokia phones named Nokia 3, Nokia 5, Nokia 6 (Global edition), Nokia 3310 has been reportedly listed for pre-order in UK via Clove. As per Clove listing the Nokia 3, Nokia 5 will be priced at £149.99 and £189.99 respectively with the release date of June 30, while Nokia 6 will cost £229.99 in UK and will release sometime in the month of June. As far as most talked about phone, the Nokia 3310 is concerned, it will be priced at £59.99 and will release by mid of June.

The Nokia 3 smartphone comes with 5-inch HD 2.5D curved display with Corning Gorilla Glass protection. We get 1.3 GHz Quad-Core MediaTek MTK 6737 chipset with 2GB of RAM and 16GB of internal storage which is expandable up to 128GB via microSD card. Nokia 3 runs on Android 7.0 Nougat and packs in a 2650 mAh battery inside. For the optics, we get a combination of 8-megapixel cameras on both front and back with f/2.0 aperture, 1.12-micron pixel size along with LED flash at the back and display flash at the front. For connectivity, we have Micro USB (USB 2.0), USB OTG, Bluetooth, Wi-Fi, GPS and NFC for sharing. Apart from this, we get Accelerometer (G-sensor), ambient light sensor, e-compass, fingerprint sensor, gyroscope, and a proximity sensor. The device measures at 143.4 x 71.4 x 8.48 mm.

The smartphone comes in four colour options such as Tempered Blue, Silver, Matte Black, Copper and will be sold for Euro 189 (approx. Rs 13,000). For the specs, Nokia 5 features a 5.2-inch 2.5D curved HD IPS LCD display with a resolution of 720×1280 pixels. Underneath the hood, the device will be powered by a 1.4GHz octa-core Qualcomm Snapdragon 430 processor, paired with Qualcomm Adreno 505 GPU. For the memory, we have 2GB of RAM and 16GB of internal storage which is expandable up to 128GB via microSD card. Running on the latest Android 7.1.1 Nougat, the smartphone sports a 13-megapixel rear camera with f/2.0 aperture, 1.12-micron pixel size, dual toned LED flash while at the front we get an 8-megapixel camera with f/2.0 aperture, 84-degree field of view and auto focus. Powering the entire device is a 3000 mAh battery and Nokia 5 does have a 3.5 mm headphone jack.

For connectivity, we get Micro USB (USB 2.0), USB OTG, Wi-Fi, Bluetooth 4.1, NFC and GPS and for the sensors, Nokia has given in Accelerometer (G-sensor), ambient light sensor, e-compass, fingerprint sensor, Hall sensor, gyroscope and a proximity sensor. The device measures at 149.7 x 72.5 x 8.05 mm.

Nokia 6 comes with a 5.5-inch full HD with a screen resolution of 1920×1080 pixels and 2.5d curved display with Corning Gorilla Glass 3 protection.The company claims that it has taken 55 minutes to machine a single Nokia 6 from a solid block of 6000 series aluminium and received two separate anodising processes. Under the hood, the device is powered by an octa-core Qualcomm Snapdragon 430 processor along with Adreno 505 GPU. The Arte Black variant is backed by 4GB of RAM and 64GB internal storage, which can be further expanded up to 128GB via microSD. While all the other colour variants come with 3GB of RAM and 32GB of internal storage which is also expandable up to 128GB via microSD card. It also houses a fingerprint scanner, which is embedded in its home button.

Nokia 3310 come in four colour variants namely Warm Red (Glossy), Dark Blue (Matte), Yellow (Glossy), Grey (Matte). The Nokia 3310 comes with a 2.4-inch QVGA screen along with a decent 16GB internal storage for a feature phone. Further, this storage can be expanded up to 32GB via micro SD card. We get a 2-megapixel rear camera with LED flash along with Nokia Series 30+ operating system. For the fuel, the 3310 packs a 1200 mAh battery which Nokia claims can last you 22.1 hours of talk time, 31 days of standby, 51 hours of MP3 playback and 39 hours FM radio playback. In terms of connectivity, we get Micro USB (2.0), Bluetooth 3.0 with SLAM, 3.5 mm headphone jack and 2G network connectivity.