A 5 inch Android phone for Rs 6,999, and yet Spice has used decent hardware. Here is our first impression of the device.

Spice recently launched a 5 inch Android phone, the Spice Smart Flo Pace 2, priced at Rs 6,999. It reduced cost by not including 3G connectivity. This is not the first phone with such a combination, with Microma’s Canvas Viva A72 coming out even before Spice. 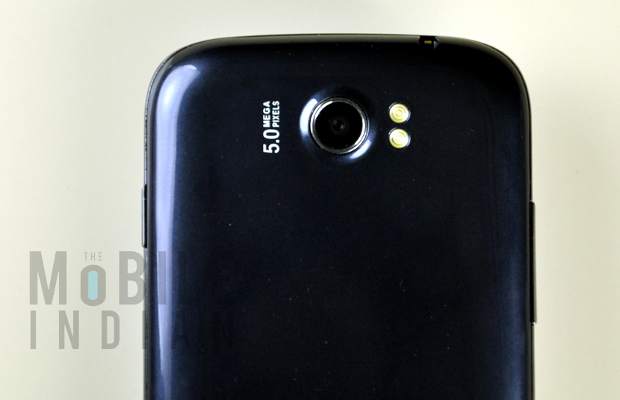 However, what Spice has done well is to include very piece of hardware worth having. We just got the phone and here is how we feel about it.

The phone doesn’t have anything unique in the way it looks. The front is all glass with three capacitive buttons at the bottom. The top gets a speaker grill and front camera, and the rear panel is curved around the edges, and has a glossy finish. You also get a flip cover with the device, which is good to look at. 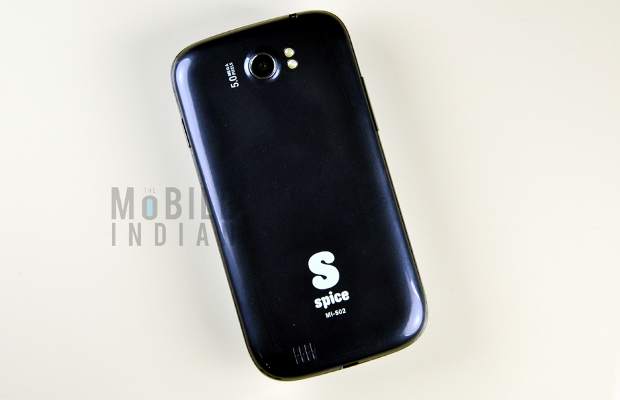 At the back there is a 5 megapixel camera with a chrome ring around it, flanked by dual LED flash. It has a power button on the right; volume rocker on the left; USB port at the bottom and 3.5 mm jack on top, all standard fare. 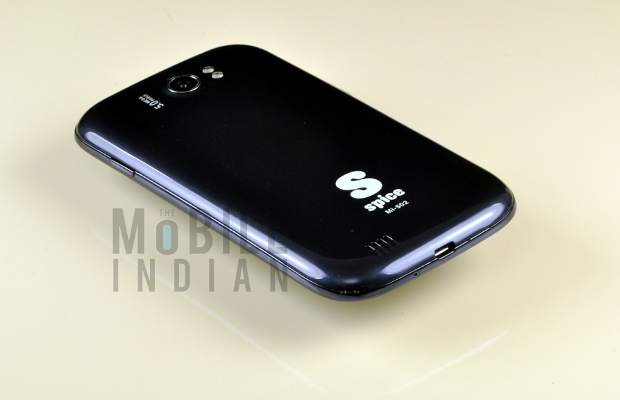 Overall, it’s good looking but has a slightly slippery design. The phone is not very thick and is good to hold, though the glossy finish makes it a little slippery, especially if you have sweaty hands. Rubberized sides would have helped.

The phone gets a 5 inch display with WVGA (800 x 480 pixel) resolution, which is good for a phone in this price range. The display is bright enough and looks quite vivid though we fear it’s a bit too vivid with slight oversaturation. 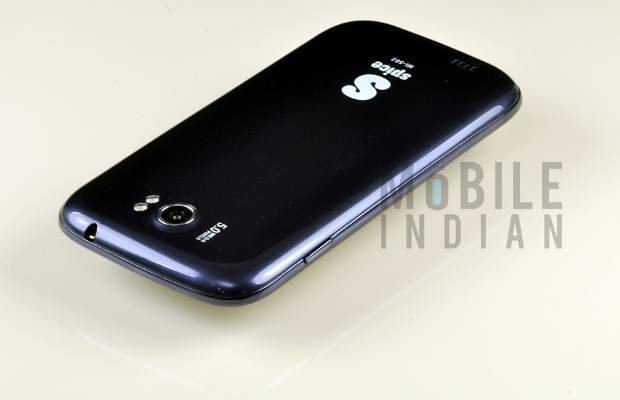 But all in all it’s good to look at and also offers quite a wide viewing angle. Touch sensitivity is also good.

Spice has put in a 5 megapixel autofocus camera at the back accompanied by dual LED flash. The camera is not great, though, and to be frank we were not expecting it to be great. It takes acceptable pictures with light conditions being appropriate and the flash is of immense help for close ups in less than perfect lighting. However, some amount of grain is visible in all pictures irrespective of lighting conditions; just that in bright conditions it is less. 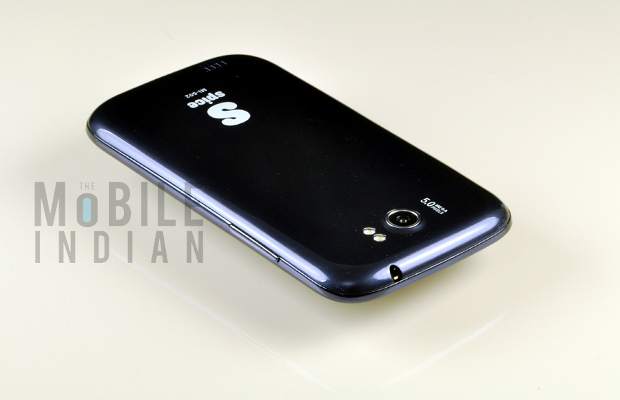 If we look from the perspective of what we get from the competition this camera is great. Micromax Canvas Viva for instance gets only a 3.2 megapixel fixed focus camera.

There is also a 1.3 megapixel camera in the front, which is good for video chats.

While there are many large screen 2G-only phones in the market most of them have only 256 MB RAM, which is not sufficient to run Android 4.0 and beyond. The result is that such phones still get only Android 2.3 and offer sub-optimal performance. 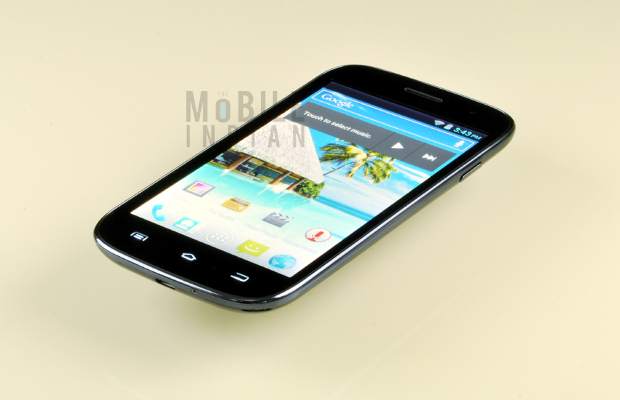 Spice seems to have learnt from that and now has 512 MB RAM, and a 1 GHz dual core processor on this phone. It also gets 512 MB inbuilt memory, which means that there is no space for pictures or anything else (Spice offers 8 GB card free).

Spice has used stock Android 4.0 ICS on this phone, though it has put in some pre-installed apps like M Tracker (mobile tracker) to help track the phone in case it is lost. There is also a SpiceGang app that offers stuff like Wallpaper, Animations and apps. You get access to the Google Play Store as well. 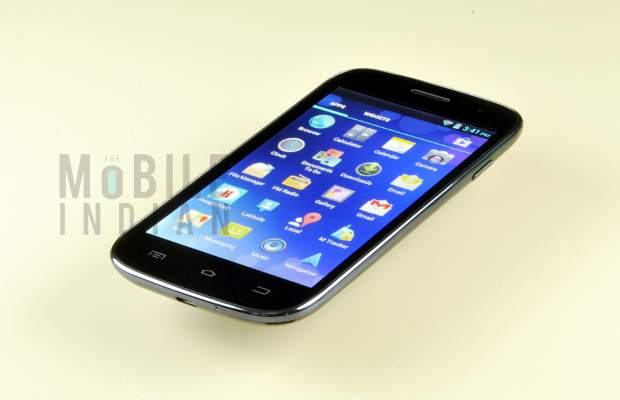 The phone is a non 3G device, though it does support EDGE (up to 256 Kbps speed), WiFi, Bluetooth and GPS. It also has FM radio. 3G penetration in terms of its availability is limited to top cities with scattered coverage in smaller towns and cities. Moreover, not many people use 3G even where it is available and for those this phone makes good sense as it comes cheaper because of the absence of a feature that they don’t use in any case. 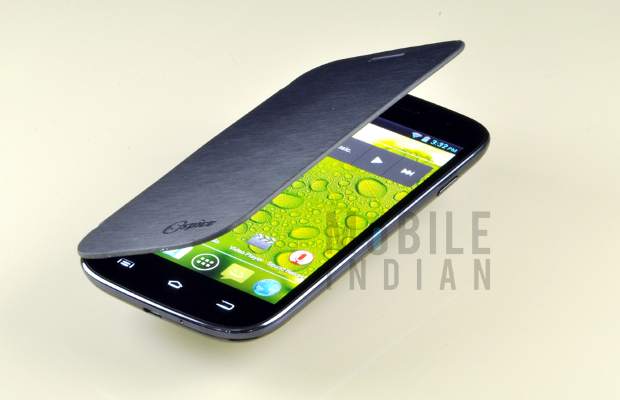 Spice has put a 2100 mAh battery in the phone and for a 2G only phone it is quite big. While we haven’t tested the phone for battery life yet, we expect it to deliver good backup. 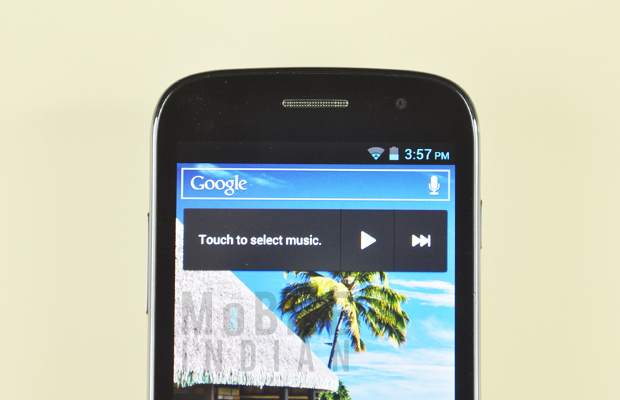 For those who do not wish to use 3G either because it’s too costly or because it’s not available in their area, or because they can access WiFi anytime this phone makes very good sense. A compromise has been made in terms of 3G and not in other key areas, offering a very good alternative to more expensive 3G 5 inch phones with more or less the same hardware. 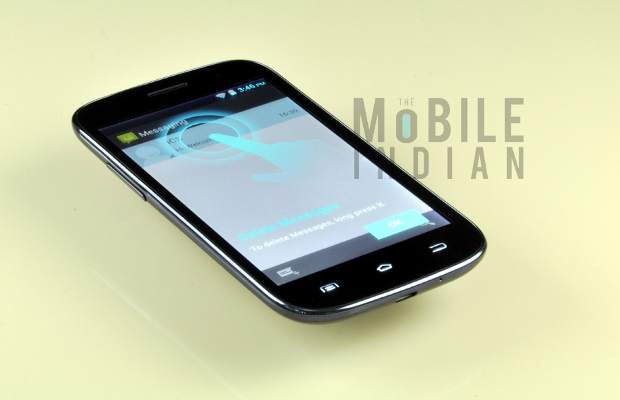 We will be ready with our tests on this phone in about a week and then we will give you a definitive answer whether this is the device to go for.