BlackBerry has introduced a smartphone that is promising, looks fresh and is capable of giving tough competition to rival mobile platforms.

BlackBerry chose a modern approach to introduce its new BlackBerry 10 OS based smartphone. The BlackBerry Z10 certainly stands out amongst all the touchscreen BlackBerry models so far. BlackBerry Z10 has a nice mono-block candy bar design and the front is button-less. Not even capacitive buttons have been offered. The essential buttons such as power/sleep and volume control keys are metallic in colour so that they stand out from the black chassis. 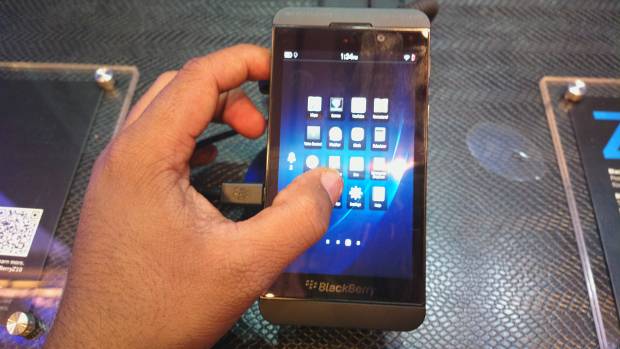 BlackBerry has dropped the dedicated BlackBerry button from the body of the device and provides good real-estate for the touchscreen display. The back of the phone is slightly textured for providing a good grip to hold the device.

In terms of design, the BlackBerry Z10 is certainly an aesthetically pleasing and powerful device for BlackBerry loyalists and users. The smartphone looks premium in black and white colour. However, in terms of the competition with Android based smartphone makers such as HTC and Apple iPhone, the company still has a couple of obstacles to cross.

BlackBerry has a close partnership with Qualcomm to use the Snapdragon family of mobile processors in BlackBerry smartphones. BlackBerry Z10 houses a dual core 1.5 GHz Qualcomm Snapdragon MSM8960 mobile processor paired with a massive 2 GB RAM. BlackBerry is also offering 16 GB on-board storage along with a memory card slot to expand storage. It was indeed smart of the company to let users choose the volume of data they wish to stuff in their smartphones. Another reason for offering the capability to add a memory card is to store full HD quality videos.

The BlackBerry Z10 has an 8 megapixel camera at the back with LED flash to click high quality photos. The camera is good enough to compete with the other Android devices with 8 megapixel cameras. However, we found that the autofocus in the camera was a bit slow whenever the distance between the subject and the phone changed. 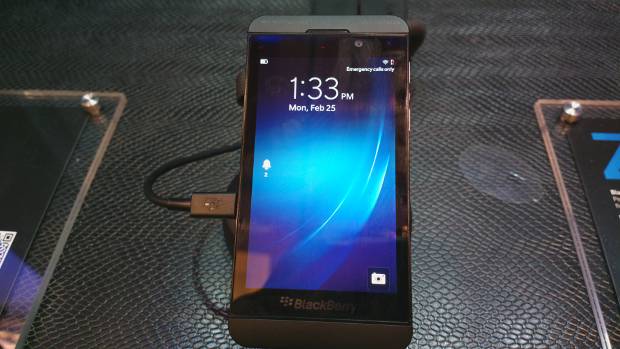 The camera brings a new Time-Shift mode feature that lets the user choose the best facial expression for the person in the picture. Indeed, that is the limitation of this function. Basically the phone’s camera captures a person’s face in burst mode. Then the user is presented with a circular ring with a level that needs to be rotated anti-clockwise for choosing the best expression. However, this is not some magical feature that can add cosmetic expressions to someone’s face.

The phone is not as heavy as it seems; it weighs 138 grams approximately, including the battery. There is a large slim battery under the back panel. The only cumbersome aspect is that users will have to remove the battery in order to insert a micro-SIM or memory card.

BlackBerry claims to have re-written a major part of the code in the BlackBerry 10 OS to make it look more modern and deliver a new user experience. The fresh looking user interface now looks totally different from the first build shown, which resembled the PlayBook OS. The company has introduced a gesture supported user experience feature dubbed Flow. As literal as it sounds, Flow means shuffling or jumping between windows/apps to access information. The BlackBerry Z10 aims to redefine navigation for BlackBerry users.

There are a few basic gestures that basically replace the physical/capacitive buttons offered on BlackBerry smartphones. A simple swipe gesture from right to left takes the user to the homescreen, which is actually a grid full of app icons. Keeping a tab on new messages, emails and social network updates with the new Peek function works by a simple swipe and hold gesture from the left of the screen till the centre. At any point of time you can check the notifications bar by a simple slide gesture from the bottom and just hold it after a few millimeters. Flicking from bottom to top will minimize the app you are using and turn it into an Active Frame. Now the Active Frames menu can have several apps open and a thumbnail showing basic details about the respective app. The screen can cover at the most four active frames in one view and the user will have to scroll if more Active Frames exist. 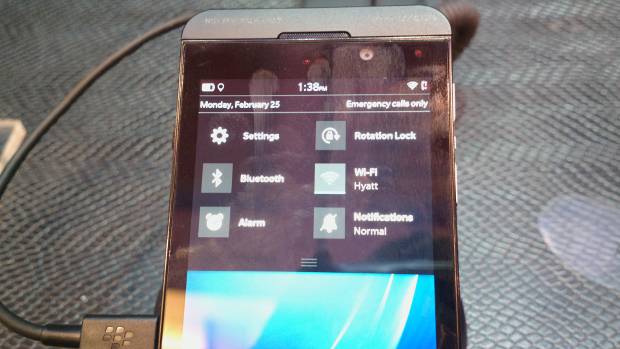 The notifications tray covers less than half of the screen to offer different single-tap options to activate or de-active running services. BlackBerry has always offered support for a variety of audio and video formats for enjoyable multimedia playback. The stereo speakers are loud too. 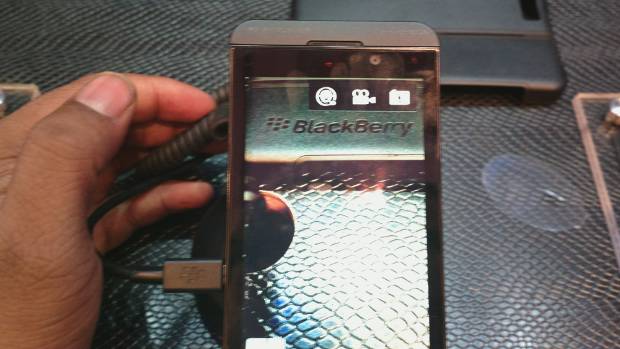 The on-screen keyboard has been redesign to include a silver strip between rows of letters. As one starts typing there will be words showing up in tiny fonts on the top of the letters to predict the word that the user intends to input. If the word is correct, simply flick from down to up on the letter and the word will automatically get completed. With the new prediction based input method, BlackBerry aims to tone down the user’s struggle with touchscreen typing to simple thumb/finger flicks. We did struggle with the new keyboard a bit but the word prediction gets smarter over time. Hopefully we will get to see a full Hindi keyboard so that one can reply with Indic fonts for specific messages.

Overall, the operating system looks fresh and worth checking out, but avid BlackBerry users will have to dedicate a couple of days to get familiar with this major shift.

There are a number of popular applications such as WhatsApp and Instagram missing from the App World at this moment. However, the company promised that all those applications will be made available in the coming few weeks.

The most interesting improvement comes in the form of the popular instant messaging service – BlackBerry Messenger. BlackBerry Messenger is now capable of making video calls with contacts directly from the app. Unfortunately, we were offered demo-units without SIM cards and BlackBerry accounts configured. So we shall confirm later if the device will offer BBM calls (video) over WiFi and cellular networks. However, we did see a demonstration of the Screen Share function, which is possible over BBM video calls. 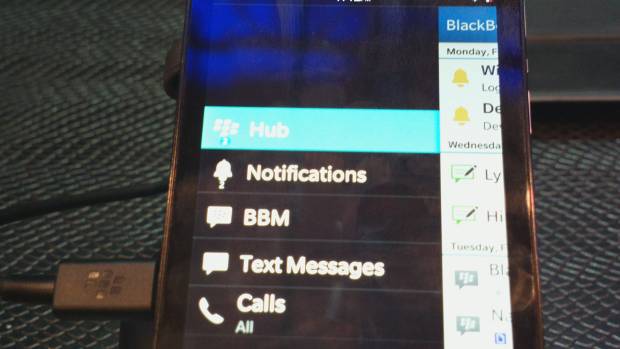 BlackBerry has packed several native apps but of those the company developed are BlackBerry Remember, BlackBerry Story Maker, Voice Control Picture Editing and Video Editing. The rest are the usual Gallery, Contacts and Social Network apps. The new BlackBerry Remember app is meant for storing your memos, tasks, flagged emails, voice notes etc. Every native app has been coded to offer anchor to the Remember app for organizing important stuff in one place. 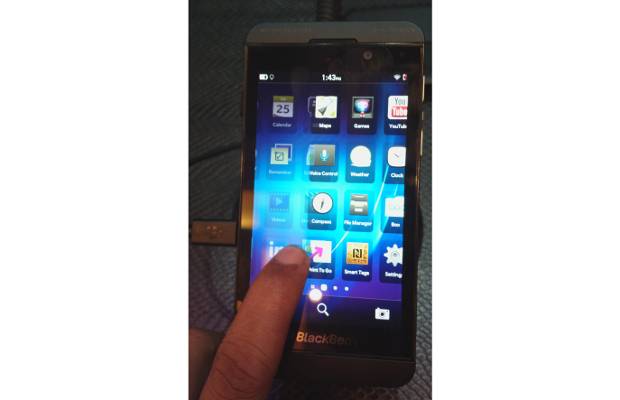 BlackBerry Hub is the messaging central for storing emails, text messages, BlackBerry Messages, and other social network notifications. There is a File Manager that offers lovely visual access to the important files, unlike the old tree-like structure of the file system.

The company has also worked closely with several India based developers to push ready to use applications such as HDFC Banking for mobile banking, PVR Cinemas for movie ticket purchases and the list goes on. Popular apps such as Skype, WhatsApp and others are expected to be available from App World next month.

At the experience zone, we also got to enjoy the full version of 3D and 2D Maps though the MapMyIndia application that comes pre-loaded is free for those who purchase the device. While several other Gmail services based apps are still missing the company tactfully avoided the question on what’s happening on that.

The BlackBerry Z10 does look like an astounding device in the hands, and interesting to try out the new swipe gesture driven user experience. From making a story-like presentation on the go to sending out an update on a social network – the phone offers it all smoothly. The Active Frames certainly makes multi-tasking interesting and the Peek gesture makes one want to check for notifications. Though the user interface and the navigation method are fairly new it hardly took us any time to get familiar with the device. 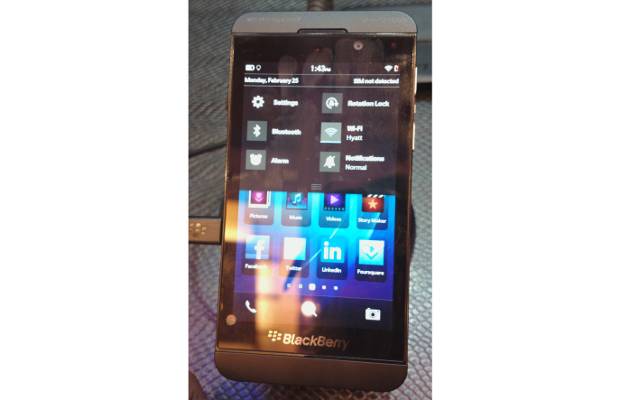 The only thing that caught our mind was the price – Rs 43,490 which is the MRP. Now, when the phone is widely available later this week, users will be able to buy it for a couple of grand less as well. However, we shall eagerly wait for a review unit to bless our hands.