The upcoming Samsung Google Nexus Prime handset will come with the Android 4.0 Ice Cream Sandwich operating system, according to an exclusive video received by The Mobile Indian from one of its sources. The smartphone is set to be unveiled in a couple of days at the Samsung Mobile Unpacked 2011 event to be held in San Diego, USA from October 11.

Lockscreen of the Android 4.0 ICS has been revamped and now will carry a short cut to camera &#151 just like the one iOS 5 will bring for the iOS devices. Take a look at the few screenshots of Android 4.0 ICS and the bit out of focus video below.

The Google Nexus Prime is being manufactured by Samsung. It carries codenamed Tuna and has GT-I9250 as its model number as reported number of times previously.

Earlier also, Samsung had released a teaser of Samsung Mobile Unpacked 2011 event. From the video also one can make out that the display is curved and the profile of the Google Nexus is super slim. 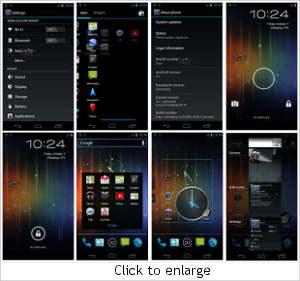 For wireless connectivity, the smartphone will support HSPA+/LTE based on the carrier and of course, WiFi (802.11 a/b/g/n) support. Google Nexus Prime will also feature Near Field Communication chip and most likely will become de-facto in all major high-end Android smartphones.

Noteworthy part of the Google Nexus Prime details is the 1750 mAh battery pack that is expected to power the massive 4.65 inch device which would be good enough for a user to enjoy it an entire day. Google Android based devices suffer from the inconsistent battery life based issues and hopes rest on Ice Sandwich to bring some stability on power management.