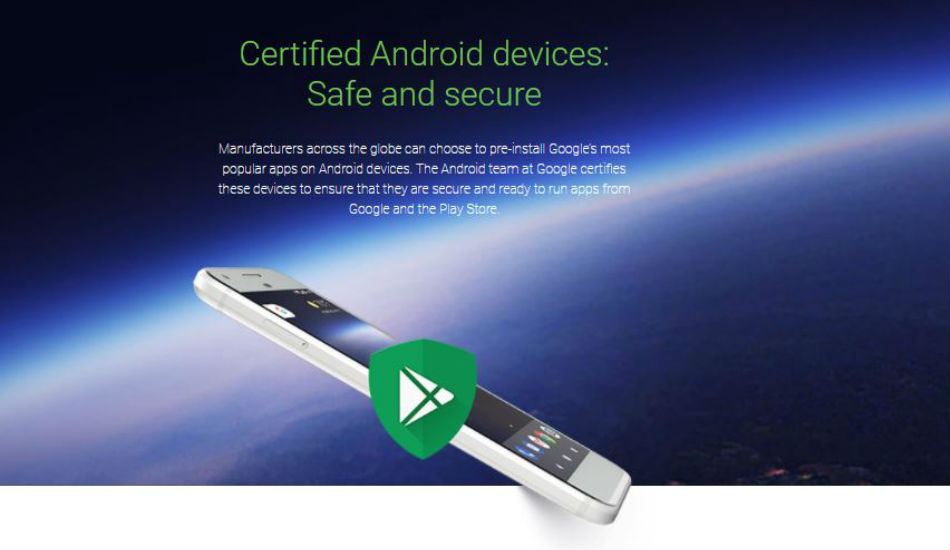 The company says that there are over 2 billion active devices worldwide and to ensure users receive a secure and stable experience, Google provides certification for Android smartphones.

Google has announced a new website for its open-source platform, Android, which provides information on the merits of using Android devices.

The company says that there are over 2 billion active devices worldwide and to ensure users receive a secure and stable experience, Google provides certification for Android smartphones. The company further adds that all the certified devices will now come with Google Play Protect out-of-the-box, which provides with a host of security features including device scanning for malware.

For the unintended, Play Protect will be built into every device with Google Play and automatically takes action to keep users’ data and device safe. Google says that it scans more than 50 billion apps every day, and the new feature will detect and remove apps that might be harmful. The brand has also introduced a revamped version of Android manager, known as Find My Device. Similar to Find My iPhone, it will allow users to locate, ring, lock and erase your Android devices—phones, tablets, and even watches.

The website consists all the benefits for using certified Android devices and the site also consists of the list of the partners as well. Further, the brand suggests that one should always look for the Google Play Protect logo on the box when you are opting for a new device.

Google works with manufacturers across the globe to run hundreds of compatibility tests that ensure devices adhere to the Android security and permissions model. These tests also verify that the Google apps pre-installed on devices are authentic and that apps from the Play Store can work as intended.