Google has announced that Fast Pair technology will be available for more devices in the coming months. 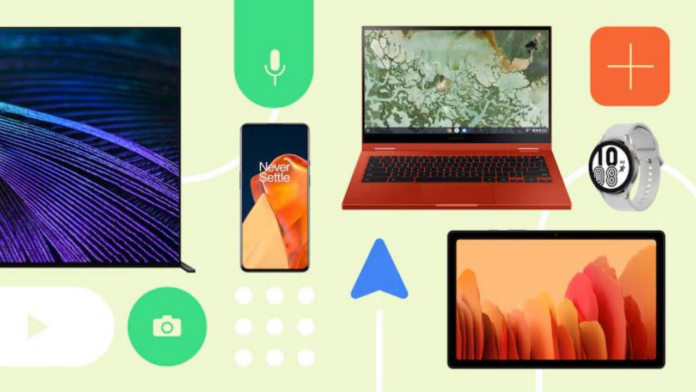 Google introduced its Fast Pair technology back in 2017 allowing devices that support it to pair instantly with your mobile phones as soon as the devices are switched on. Now, Google is announcing the expansion of the feature to more categories of devices rather than just smartphones. It has also announced a more seamless sync between Windows PCs and Android devices.

Google is today introducing more simple and helpful ways to make your devices, from Android’s ecosystem and beyond, work better together. The company is extending Fast Pair’s functionality beyond audio connectivity with wearables, headphones, speakers and cars. Google is extending Fast Pair to TVs and smart home devices, so you can instantly start using all the devices without any hassle.

Starting in a few weeks, when you turn on your Fast Pair-enabled headphones, your Chromebook will automatically detect it and will show you a pop-up to pair with it in a single click. Google says that if you get a new Chromebook later this year, you can use your Android phone to quickly set it up and get immediate access to all of the information you’ve already saved, like your Google login and your Wi-Fi password using. Further, you’ll be able to set up your headphones for when you need to watch quietly with your Google TV or Android TV OS device at home using Fast Pair, in the coming months.

Next in line is the ability to unlock your Chromebook, Android phone & tablet with the help of your watch. Google says that it will bring this feature in the coming months, to your paired Wear OS smartwatch so you can instantly unlock and access your Chromebook and Android phone or tablet when you’re close by.

If you use a digital car key,  you can now use your compatible Samsung or Pixel phone to lock, unlock and start your supported BMW vehicles from your phone. Starting later this year, on phones with Ultra-Wideband (UWB) technology, you won’t even have to take your phone out to use it as a car key. You’ll also be able to securely and remotely share your car key with friends and family if they need to borrow your car.

Google also revealed that it is building technology for Bluetooth-enabled headphones that will enable them to automatically switch the audio to whatever device you’re listening to. This means that if you’re wearing headphones to watch a movie on your Android tablet and you receive a phone call, the movie will pause and the headphone audio will automatically switch to your Android phone. When the call ends, it will then switch back to the movie on the tablet.

It is also introducing Spatial audio on headsets that will make you feel like you’re really thereby adapting the sound based on your head movements, positioning the audio in the space all around you. These features will be available in the next few months on supported headphones.

Furthermore, to help you cast music and podcasts you’re listening to from your Android phone to more of your speakers, Google will be bringing Chromecast built-in to more brands, starting with all Bose smart speakers and soundbars in the next few months. This means that you’ll be easily able to play music via these speakers without first pairing them with Bluetooth.

Better integration between Windows and Android

As we already know, Google’s Nearby Share works perfectly well when we want to share content between Android devices. Now, by connecting your Android phone to your Windows PC with Fast Pair, you’ll be able to quickly set up Bluetooth accessories, sync text messages and share files with Nearby Share. Google coneys that it is working with Acer, HP and Intel to bring these experiences to select Windows PCs first later this year.