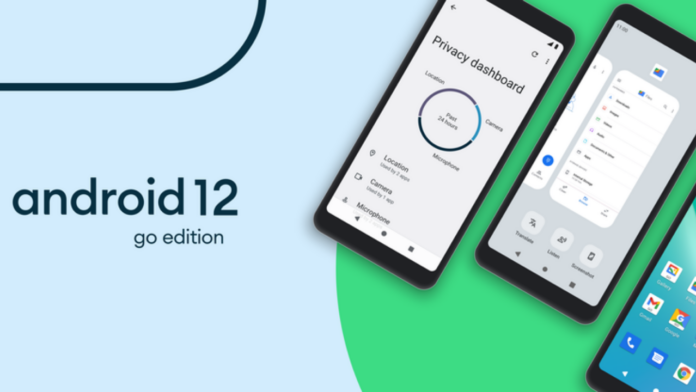 With Go Edition of its Android software launch back in 2017, Google wanted everyone, including those with budget or entry-level devices, to enjoy what it is baking into its operating system without affecting the device’s performance. Four years later, Google is announcing the Go Edition of Android 12, its latest iteration of the operating system.

Google says that over 200 million people actively use an Android (Go edition) phone and with the recent release of Android 12 (Go edition), the company is aiming to create a faster, smarter and more privacy-friendly experience.

With Android 12 (Go Edition), Google says that Apps on your device will launch up to 30% faster and with smoother animation, meaning they’ll open instantly with no more waiting on a blank screen. Further, the battery is claimed to long laster as Android 12 (Go edition). This is because it will automatically save battery life and storage by hibernating apps that haven’t been used for extended periods of time.

This feature is beneficial for devices with limited storage capacity. Meanwhile, Google also updated the Files Go app that will allow you to recover files within 30 days, so you can delete unnecessary files to free up space.

The Recent Apps screen has also been updated as of now. You’ll see options to listen to the news and translate any on-screen content into your preferred language. Further, you’ll also be able to save data by sharing apps directly with nearby devices using Nearby Share and Google Play.

Moving on, Google is also making available the Profiles feature directly on the lock screen. You’ll now be able to easily switch to a guest profile before sharing your device, and reset it once they’re done.

Lastly, as Android 12 was all about privacy, with the Go Edition of the same, Google doesn’t want to miss out on those features. Android 12 (Go edition) will be able to give you more transparency around apps that are accessing your data. It will also provide more controls to decide how much private information your apps can access.

Google has added the same privacy dashboard from Android 12, where you’ll see a snapshot of which apps are accessing particular types of sensitive data, like the microphone, and revoke permissions if needed. And the new privacy indicator on your status bar will tell you when your apps are specifically accessing your microphone or camera.

Google is also giving you more control over how much information you share with apps. With new approximate location permissions, you can limit apps to see only your approximate location instead of a precise one. Google confirms that smartphones with Android 12 (Go Edition) will arrive starting next year.