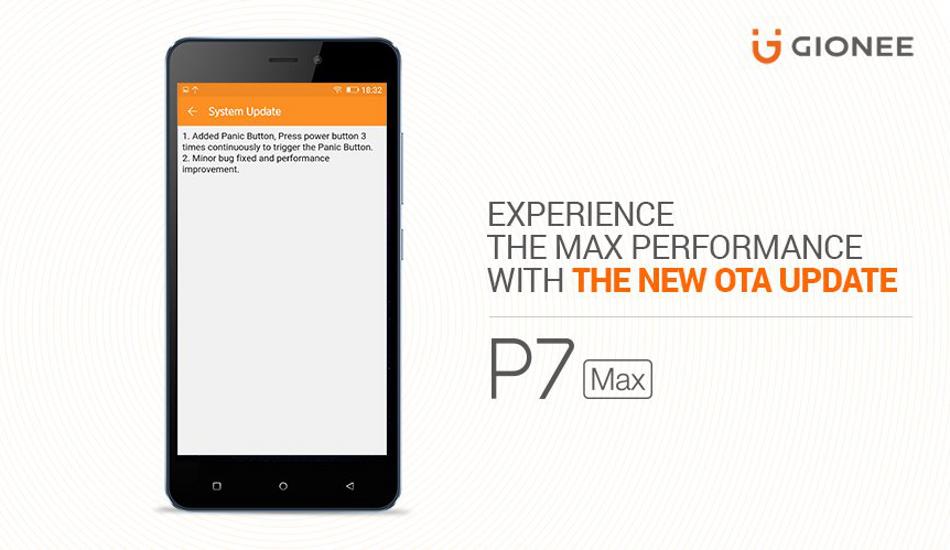 Moreover, this update fixes the minor bugs and enhance the performance of the device.

Gionne has today announced a new OTA update for Gionee P7 Max, that brings Panic Button support to this device which is in line with Government of India directive, which states that all mobile phones sold in India from January 2017 should come with a panic button.

As per Gionee, user has to press the power button three times continuously to trigger the panic button. Moreover, this update fixes the minor bugs and enhance the performance of the device.

To recollect, Gionee P7 Max was launched in India in November last year for Rs 13,999. It features a 5.5 inch HD (1280 X 720 pixels) IPS display. It is powered by a 2.2 GHz octa core processor coupled with PowerVR G6200 GPU. It has 3GB RAM and it runs on Android 6.0 Marshmallow operating system with Amigo 3.2 UI on top of it. The smartphone comes with dual SIM and is 4G enabled.

It has an 8 megapixel rear camera with LED flash and a 5 megapixel front camera. Gionee P7 Max has a 32 GB internal storage and at this point of time it is not known whether it has an expandable memory slot or not. It packs a 3,100 mAh battery which is said to offer 290 hours of standby time. On the connectivity front, the Gionee P7 Max supports 4G, WiFi, GPS/AGPS, micro USB and Bluetooth 2.0.