The smartphone is expected to have fingerprint scanner and will also have IR blaster support.

Gionee seems to be working on its new A-series smartphone, which is dubbed as Gionee A1. The specifications of the said smartphone have been leaked online.

As per leaked information, the Gionee A1 smartphone is said to feature a 5.5 inch full HD (1920×1080 pixels) 2.5D curved glass display with Gorilla Glass protection. It will be fueled by a 1.8 GHz Octa core processor, along with 4GB of RAM. It will come with 64GB of internal storage, which cane be further expandable up to 128GB via microSD card. 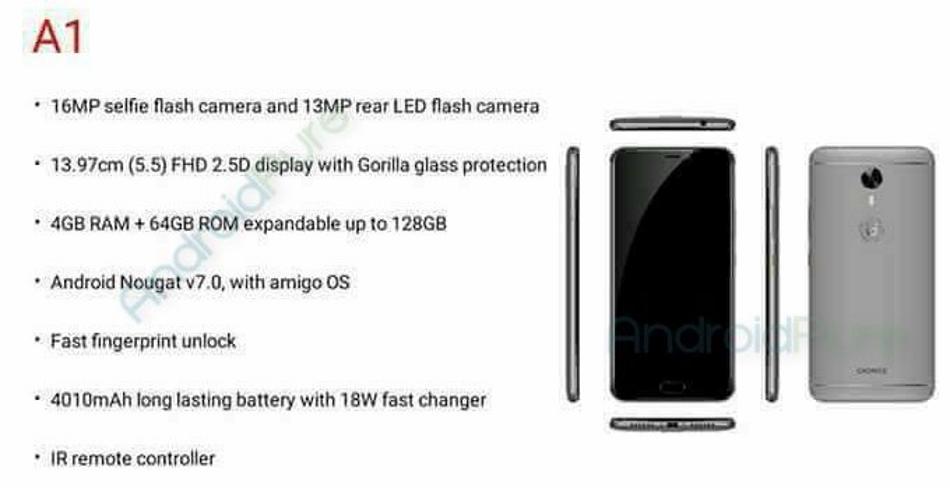 The Gionee A1 will run on Android 7.0 Nougat operating system, which will be wrapped under Amigo OS 4.0. On the camera front, the smartphone would come with a13-megapixel rear camera and a good 16-megapxel front-facing camera for selfies and video chats. Both the back as well as front camera module will come with a LED flash light. It is said to offer fingerprint scanner as well, which will be integrated on its home button and will also have IR blaster support. Further, as per leak, the smartphone will get its strength from a 4010mAh battery.

As of now, there is no official information on the existence of this smartphone, so we advise your user to take this as a pinch of salt.

Note: The top image is for representational purpose only