Google and Samsung made Galaxy Nexus smartphone will have a powerful front facing camera that can record 720p HD videos, according to a Yorkshire England based technology enthusiast Sam Pullen.

Pullen put up a video on YouTube showing the 720p HD video recording option of the front facing camera of Galaxy Nexus. 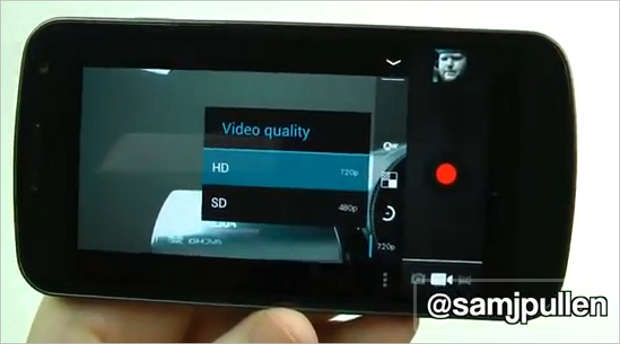 Notably according to earlier reports, the 5 megapixel camera at the back of the smartphone is capable of recording 1080p full HD videos.

Galaxy Nexus is expected to arrive mid-December this year featuring Android 4.0 Ice Cream Sandwich. It is expect to cost around Rs 34,000 approximately.

It will come with a big 4.65 inch Super Amoled HD display with native 1280×720 pixel resolution. Under the slim form factor, it houses a dual-core 1.2 GHz processor and will have a suite of features including dual-band WiFi, Bluetooth 3.0, Near Field Communication, and storage option of 16 GB or 32 GB.