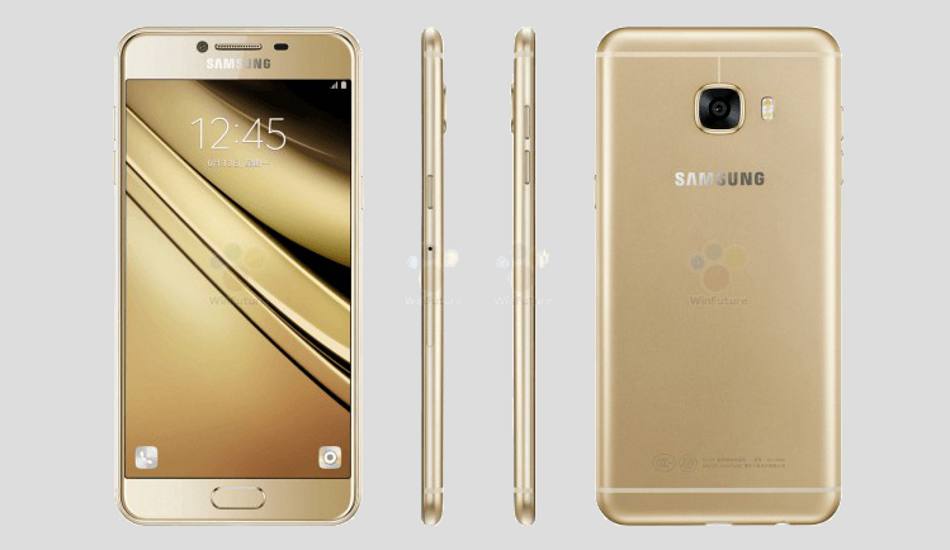 Samsung is expected to launch the Galaxy C5 Pro and C7 Pro on January 21, 2017. Now ahead of the official launch, an alleged promotional image has been leaked online showing the three devices with a message that read ‘Coming Soon’. The image shows all the three smartphones with its sleek design and in new colors.

The leaked image was posted by a twitter user @mmddj_china which is said to be the promotional poster for the Galaxy C series. The image shows the Galaxy C5 Pro, C7 Pro and C9 Pro in blue and gray shades, but it is expected that the smartphones will be available in other colours too.

While the Galaxy C9 Pro has already been launched in China last year, the other two smartphones are yet to be launched. The image of the Galaxy C9 Pro in the poster hints that the smartphone might now be launched globally as well. The C9 Pro was the first Samsung device to come with a new design change featuring three thin lines for its antenna bands and the same design will be found on the Galaxy C5 Pro and Galaxy C7 Pro, too. The poster also hints that the C5 Pro and C7 Pro may come with 16 megapixel front cameras and Super AMOLED displays.

Talking about the rumoured specifications,the Samsung Galaxy C5 Pro is expected to come with a 5.2-inch or 5.5-inch full HD display with 1080 x 1920 resolution. It is likely to be powered by a Qualcomm Snapdragon 626 octa-core processor with Adreno 506 GPU and 4GB of RAM. The C5 Pro will come with 64GB of internal memory and it will boast a 16 megapixel camera both at the front and back.

Meanwhile, the Galaxy C7 Pro is expected to come with a larger 5.7-inch full HD display with the same 1080 x 1920 resolution. It will powered by the same Qualcomm Snapdragon 626 chipset and come with the same memory configuration and same camera setup at rear and front (16-megapixel) as rumoured for the Galaxy C5 Pro.

Additionally, Both the Galaxy C7 Pro and the Galaxy C5 Pro are also rumored to come with a USB Type-C port, Samsung Pay mobile payment service, and a fingerprint scanner. Both are expected to run on Android 6.0.1 Marshmallow operating system with the company’s new ‘Grace UX’ layer on top.