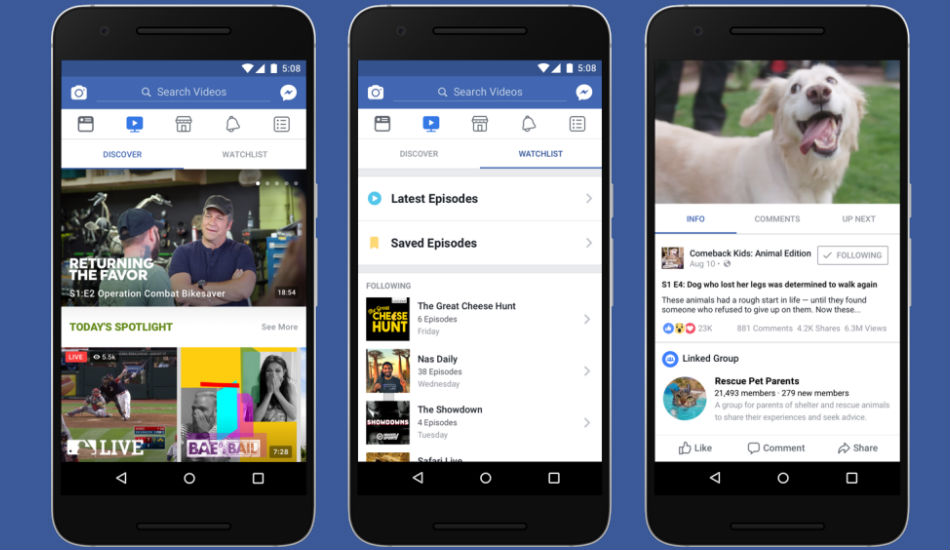 Facebook is all set to introduce its new video platform, Watch, in India soon. The social media giant is reported to launch the video platform between January and March 2018.

According to a report by The Ken, Facebook is looking to source regional-language content for its application as well. The report further highlights with Watch, creators will be able to showcase their content better as compared to YouTube, which uses an algorithm for its recommendation tab.

The new video platform is in line with company’s ambitious plan to take a head-to-head competition with streaming services like Netflix, Amazon Prime Videos or even Google-owned YouTube Red. This also means that the company is planning to enter the video first business and want to monetize it through generating more video ad-based revenues. However, it would be interesting to see whether this new video service will be able to give a stiff competition to other streaming giants.

To recall, Facebook launched its video platform Watch in August this year. The video service was available to a limited group of people in the US and the company plans to bring the experience to more people soon. Further, the social media giant will be opening up Shows to a limited group of creators and plan to roll out to all soon.

Watch is available on mobile, desktop and on Facebook’s TV app and it has different video sections like “Most Talked About,” which highlights shows that spark conversation, “What’s Making People Laugh,” which includes shows where many people have used the “Haha” reaction, and “What Friends Are Watching,” which helps you connect with friends about shows they too are following.

Coming to the Shows that will be showcased on the video platforms are Kitchen Little by Tastemade, which is a funny show about kids who watch a how-to video of a recipe, then instruct professional chefs on how to make it. Each episode features a new child, a new chef, and a new recipe. Then there is Returning the Favour, a series hosted by Mike Rowe where he finds people doing something extraordinary for their community, tell the world about it, and in turn, does something extraordinary for them. Apart from this, there will live events such Major League Baseball, live shows of Gabby Bernstein and a daily show like Nas Daily.