HTC is working to bring a Desire 516 smartphone in Dual-SIM version with 5-inch qHD display and powered by 1.3 GHz quad-core mobile processor paired with 1 GB RAM.

HTC is quietly working on yet another mid-range smartphone under its Desire series. The new phone is named as HTC Desire 516, reported XDKB – a China based website. As per the report, the HTC Desire 516 will be first introduced in Chinese markets and then made available for other regions.

The Desire 516 smartphone is said to have a 5-inch touchscreen display with 960×540 pixel resolution. This smartphone will be powered by a 1.2 Ghz Quad-core mobile processor – MediaTek or Qualcomm chipset solution depending on the market. 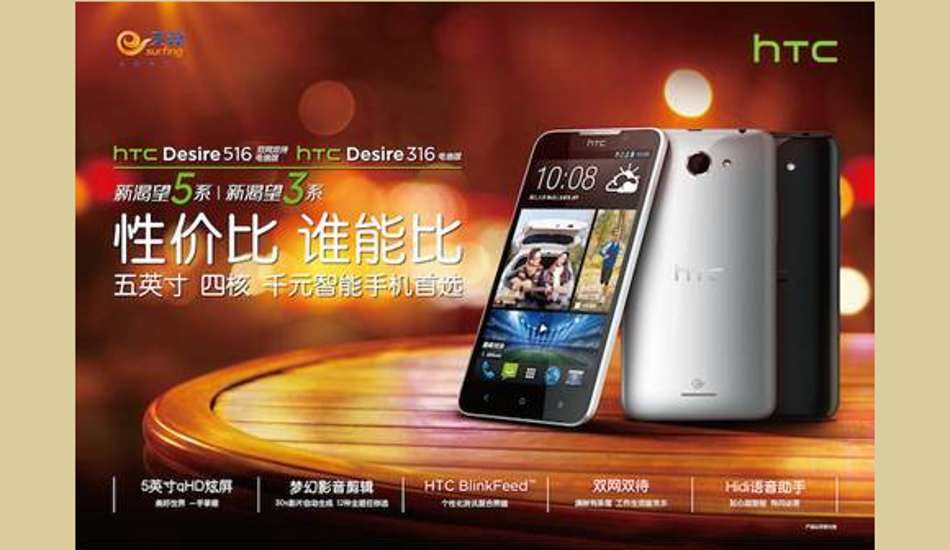 HTC is said to have armed it with 1 GB RAM and HTC Sense user interface. The promotional image clearly hints at the BlinkFeed support on the Desire 516 smartphone. HTC BlinkFeed aggregates news and social media content selected by the user to present it in a snapshot format on the homescreen. The smartphone reportedly has a 5 megapixel camera with LED flash. The single SIM version of the Desire 516 is expected to be announced as Desire 316 with exact same set of features.

HTC has also loaded the Video Highlights and few other existing enhancements with Social Network support in the HTC Sense.