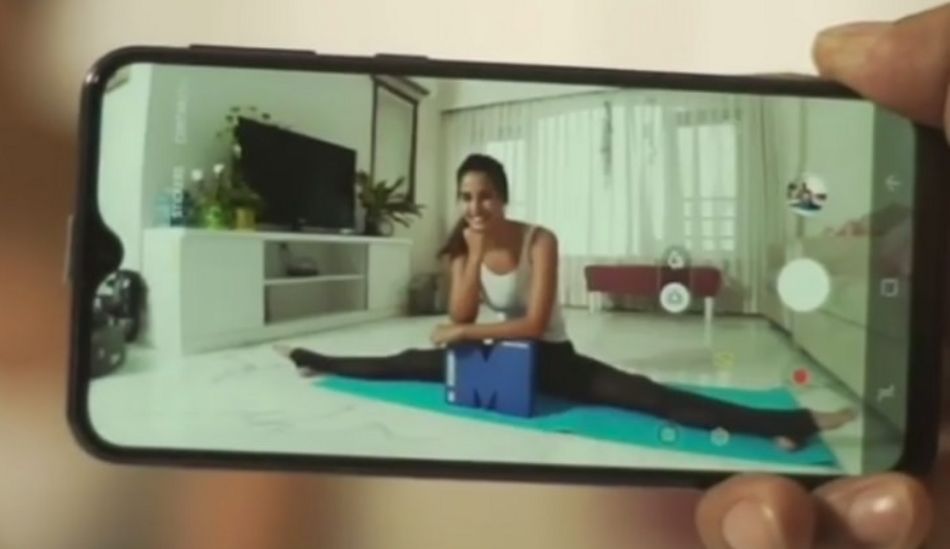 Samsung is set to launch a new Galaxy M-series of smartphones on January 28 in India which will include the Galaxy M10, M20. Now ahead of the launch, Bollywood actress Disha Patani,who is promoting the latest smartphonesform Samsung, has teased the ultra-wide camera on the upcoming Samsung’s Galaxy M series.

The actress posted a 46-second-long video teasing the upcoming device lineup on her Instagram account. The video briefly shows us the design of the smartphone both from the front as well as the back. The video highlights that the device comes with two camera lenses – the primary for a normal click and a secondary camera showing a super wide-angle lens. The ultra wide-angle lens allows you to capture a lot more of a scene in a frame.

I’M SO KICKED. Thanks to the Ultra Wide Camera in Samsung Galaxy M Series, I can go as wide with my yoga poses as I want and take the complete picture. Want to know more? Go to @samsungindia and click on the link in their bio to get notified. Launch announcement on the 28th Jan on Amazon at 6PM. Stay tuned. #IMPOWERD

The video shows phone’s Infinity-V display with a tiny waterdrop notch, in addition to the rear-mounted fingerprint sensor. It also reveals that the M series will be announced on January 28 at 6pm on Amazon India.

It may be recalled that Dish Patani had earlierposted a promotional video for the M-series by copy-pasting the instructions given by the agency who is coordinating the promotional activity for the Galaxy M seriess . The post has now been deleted.”Hey – final video is here. Will mail you the high res video in something so please use that as the final video to be uploaded. Caption below,” read the post. After which the actress was massively trolled for her apparent goof up with a caption. 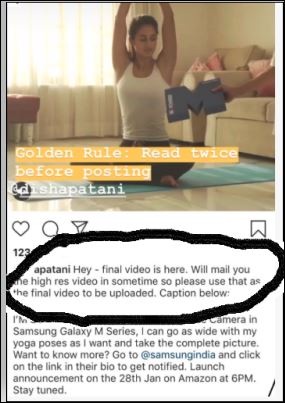 Coming back to the device, both Samsung Galaxy M10 and M20 are likely to be launched with the Android 8.1 Oreo out-of-the-box as it has been already revealed that the smartphones will receive the Android 9 Pie update in August.

The Galaxy M10 will come with a 6.2-inch HD+ screen with 720p resolution and the Infinity V notch. It’ll be powered by Samsung’s Exynos 7872 processor coupled with 2GB and 3GB RAM options. The device will run on Android 8.1 Oreo.

Samsung Galaxy M20 will reportedly sport a 6.13-inch Infinity-V display with Full HD+ resolution and a 19.5:9 aspect ratio. Under the hood, Galaxy M20 will be powered by an octa-core Exynos 7885 processor with 3GB of RAM and in 32GB and 64GB internal storage variants.