ColorOS 11 for Oppo F17 starts rolling out in India

Oppo has released the ColorOS 11 stable update for Oppo F17 in India and the company is also recruiting testers for Oppo Reno ColorOS 11 beta update. 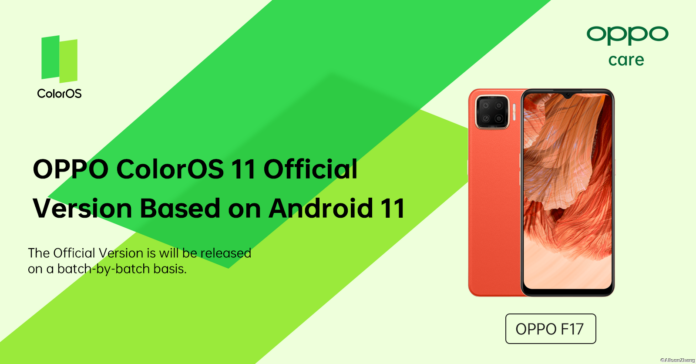 Oppo released ColorOS 11 based on Android 11 back in September of 2020. Since then, a bunch of its devices have received the update. And now, Oppo has released the ColorOS 11 for the Oppo F17 smartphone in India.

Oppo has been releasing many beta and stable versions of ColorOS 11 simultaneously for its smartphones. The company releases an updated launch timeline for its devices at the beginning of every month. As per this month’s timeline, the Oppo F17 was supposed to receive Android 11 in India, which the company has now fulfilled.

The beta program for ColorOS 11 for Oppo F17 went live late in May. Now, the stable update is currently rolling out in India with firmware version C.10. Users should be running either A.39 or A.41 builds to update to C.10.

If you haven’t gotten a notification for the update yet, you can head over to Settings > Software updates > Gear Icon > Official Version Application. Then, you will have to mark the ‘I agree’ checkbox and select Apply now. You can then click on check for the new version option, download, and install the ColorOS 11 stable update.

ColorOS 11 for Oppo Reno in India

Apart from this, Oppo has started recruiting ColorOS 11 beta testers for the first-gen OPPO Reno smartphone in India. The registrations for the update have already begun and will last till July 3rd.

The user should be on firmware version C.37 or C.38 to update to ColorOS 11. If you have one of these builds installed, you can go to Settings > Software Update > Gear Icon > Apply for Beta Version > Update Beta Version.

Now, follow the on-screen instructions and once done, those who have been selected will receive the beta build via an OTA update. As this is a beta update, there may be bugs present in the build. Therefore, it may hamper the user experience of your device.