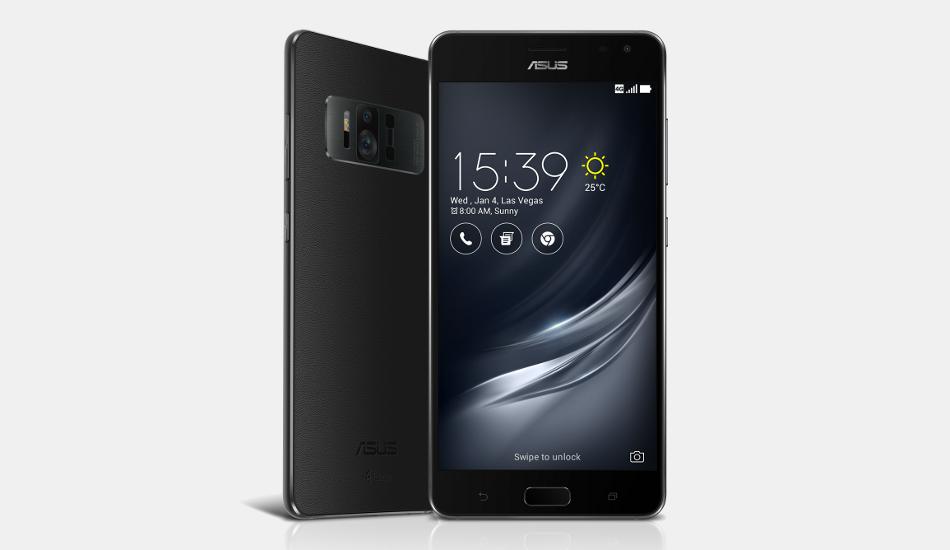 Asus has officially unveiled the world’s first Tango-powered and Daydream-ready smartphone, the Zenfone AR at CES 2017. Notably, this is also the first smartphone to boast a whopping 8GB of RAM. The brand also announced the Asus Zenfone 3 Zoom with dual-camera setup built for camera enthusiasts.

Asus Zenfone AR is the second smartphone, after Lenovo Phab 2 Pro, which comes equipped with Google aspirational project, Tango. The smartphone also support Google Daydream VR, which makes it the first smartphone to feature both Tango and Daydream technologies.

For those who are not aware, Tango is a technology platform developed and authored by Google that uses computer vision to enable mobile devices, such as smartphones and tablets, to detect their position relative to the world around them without using GPS, while Daydream is Google’s take on the high-quality mobile VR experience. Though Phab 2 Pro was the first device to come equipped with Tango but it was let down with some mediocre specs, but the Zenfone AR is a true flagship device which comes with some insane specifications.

To start with the device comes with a 5.7-inch WQHD Super AMOLED display with a screen resolution of 2560×1440 pixels, which makes it an ideal device to run augmented reality apps. Under the hood, the Zenfone AR packs a Qualcomm Snapdragon 821 processor, which the company is optimised for Tango. Though Qualcomm unveiled its state-of-the-art Snapdragon 835 processor, Asus says that ZenFone AR was developed in close cooperation with Google to deliver the best Tango and Daydream experiences. The device is also the first to sport a whopping 8GB of RAM and the company has also promised that the device will come in different variants including a 6GB of RAM and storage option ranging from 32GB to up to 256GB.

The smartphone comes with a 23-megapixel Sony IMX318 rear camera, with usual Tango sensors for motion tracking and depth sensing. The main camera also supports TriTech+ autofocus system, dual-PDAF, second-gen Laser Focus, and continuous focus. The rear camera supports 4-axis OIS (optical image stabilisation) as well as 3-axis EIS (electronic image stabilisation) for video recording alongside support for 4K video recording. The device comes with an 8-megapixel front camera and is backed by a 3,300mAh battery. The smartphone runs on the latest Android 7.0 Nougat and support Hi-Res Audio, DTS virtual surround sound, and a 5-magnet speaker. The Zenfone AR will be available in the second quarter of 2017, however, the company didn’t provide pricing for the handset yet.

On the other hand, the company also announces Zenfone 3 Zoom during the event. The smartphone is touted as the slimmest smartphone with a high-capacity 5000mAh battery and comes with a dual-camera setup.

The major highlight of the smartphone is the dual-camera system comprises two 12MP cameras, one with a f/1.7-aperture, 25mm wide-angle lens and a second with a 59mm lens. This means that a user can click a landscape picture covering more area with the 25mm wide-angle lens and can capture portraits with 2.3x optical zoom with a 59mm lens. This is the second smartphone after Samsung Galaxy S7 to feature Dual Pixel PDAF along with subject tracking autofocus, and second-generation laser focus, which the company claims can achieve accurate focus in just 0.03 seconds, even when photographing moving subjects. The company has also come up with a SuperPixel camera technology that enables it to focus quickly and capture clear photos at night or in low-light environments. The company claims that its new technology enables the camera on ZenFone 3 Zoom to have 2.5-times (2.5X) greater light sensitivity than Apple iPhone 7 Plus and 10-times (10X) that of an average smartphone. There is also a 13-megapixel camera for the front with a Sony IMX214 sensor, a f/2.0 aperture, and a screen flash feature.

As for the specs are concerned, the Asus Zenfone Zoom comes with 5.5-inch Full HD AMOLED display with a screen resolution of 1920×1080 pixels. The smartphone is backed by a Qualcomm Snapdragon 625 processor and the top-end model boasts a 4GB of RAM and 128GB of storage. The phone runs Android 6.0 Marshmallow and comes with a 5,000 mAh battery which can also double up as a power bank for charging other devices. The company claim that the battery can give up to 42 days of standby time and capture up to 6.4 hours of continuous 4K UHD video on a single charge.

The Asus Zenfone 3 Zoom will be available starting February 2017, though the company has not revealed the price of the device. Also, it is still unknown whether the company will bring both of the smartphones to India or not.