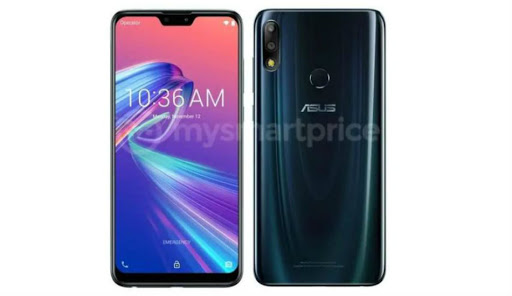 The front shows the notched display and the back shows a vertical dual camera system and a fingerprint sensor.

Asus will launch the Asus Zenfone Max Pro M2 smartphone in Indonesia on 11th December. Asus has also been teasing the launch of Zenfone Max Pro M2 from some time on its social media handles. Now, the smartphone has been full revealed in a press render by a tipster alongwith some of its specifications.

Tipster Ishan Agarwal has tweeted a press render in collaboration with MySmartPrice and reveals some specifications of the upcoming ZenFone Max Pro M2. The render shows the front and the back panel of the phone. The front shows the notched display and the back shows a vertical dual camera system and a fingerprint sensor.

The dual camera set is in contrary to the earlier leaks which have claimed that the phone will have a triple rear camera setup. Furthermore, the tipster has tipped that the smartphone will launch in India on December 11 or 12.

As per him, the smartphone will sport a 6.26-inch HD display with 19:9 aspect ratio. It is said to come with a glossy plastic display and Gorilla Glass 6 protection. The dual camera setup variant will sport a 12-megapixel sensor and another 5-megapixel sensor at the back with f/1.8 aperture. At the front, there is expected to be a 13-megapixel sensor with f/2.0 aperture. ZenFone Max Pro M2 is expected to be powered by a Snapdragon 660 processor. It is said to run on stock Android, and feature a massive 5000mAh battery. The device will be offered in Midnight Blue and Cosmic Silver colours as per the tipster.