The latest update shifts the build number of the device to version 80.30.96.71 which dates back to August 14. The system update adds a new Navigation Gestures panel under Settings > Display > Navigation Bar which when enables will display a tutorial of how gesture-based navigation works.

A little over a month after its launch, the Asus Zenfone 5Z is being rolled out an update that adds a new feature to the system UI of the smartphone – gesture navigation. The gesture-based navigations are part of Google’s latest Android 9 Pie which allows users to move through the system using gestures instead of traction three-button on-screen keys.

TechPP reports that the latest update shifts the build number of the device to version 80.30.96.71 which dates back to August 14. The system update adds a new Navigation Gestures panel under Settings > Display > Navigation Bar which when enables will display a tutorial of how gesture-based navigation works. The feature works similar to the ones found on custom skins of devices from OnePlus, Oppo and Xiaomi. 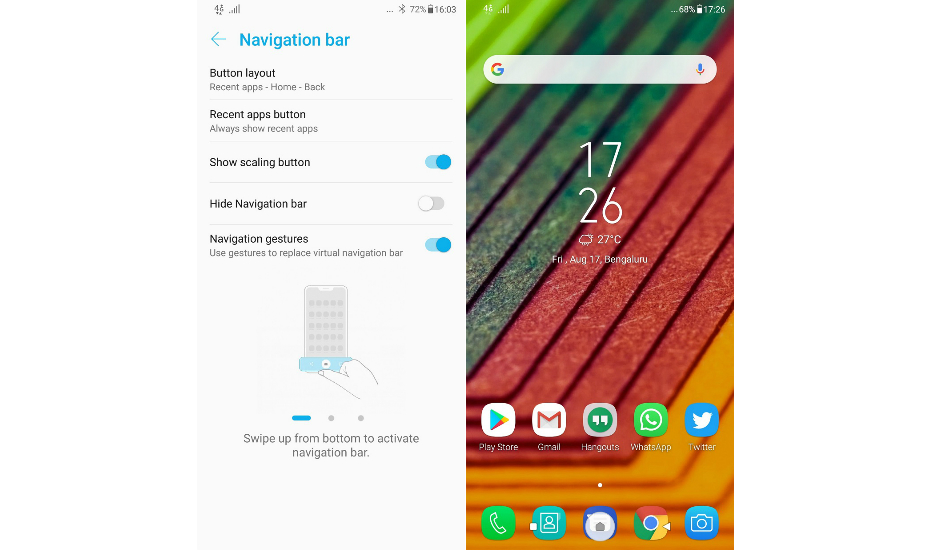 Swipe from the centre to get to the home screen. Swiping up from either side, will either result in getting you back to the previous screen or the multitasking tray, which is customisable to one’s liking. Asus will be seeding the update through batches and we suggest you wait for the updates or manually search for one by heading over to “Check for Update” under Setting > System update.

A previous update to the device earlier this month included enhancements in camera performance, improvement of WiFi stability and other bug fixes to the ZenFone 5Z. Ever since then the Zenfone 5Z has boasted of RAW file support, panorama feature, on/off button for EIS, flash feature in Pro mode and real-time filters.

To recall, the Asus Zenfone 5Z (ZS620KL) has a 6.2-inch Full HD+ display with a 19:9 aspect ratio and a screen resolution of 1080 x 2246 pixels. It runs on Android 8.0 (Oreo) with ZenUI 5.0 which is said to be upgradable to Android P. The company has introduced a host of interesting AI features like AI Boost, Smart screen, AI ringtone and more that makes it a really interesting piece of technology. It comes with 3300 mAh battery with ASUS BoostMaster fast charging and AI charging.