The certification reveals that the smartphone will bear a model number ZC600KL.

Asus’s CEO Jerry Shen, confirmed in September last year, that the company will release its Zenfone 5 series in March 2018 at the earliest. Now, it seems that the first smartphone from this series will be none other than Asus Zenfone 5 Lite. 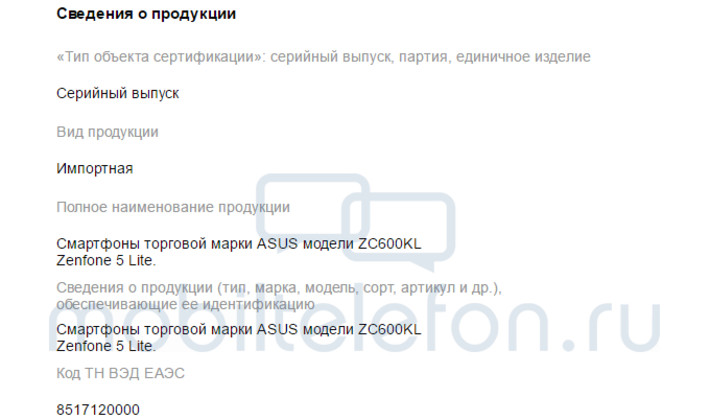 There is no information about the device and it still unknown whether the company will announce the new series at the upcoming Mobile World Congress (MWC) 2018 or it will hold a separate event for the same. Previously, the brand introduced its first smartphone, the Zenfone Max Plus (M1), that features the latest 18:9 display.

The smartphone is priced at $229 (approx. Rs 14,534) for 3GB of RAM and 32GB of internal storage. The smartphone will go on sale in February and it will be available in Azure Silver and Deepsea Black colour options. Asus also showcased the device at the ongoing CES 2018.

Starting with the tall display, the Zenfone Max Plus (M1) bears a 5.7-inch full-screen display with a screen resolution of 2160 x 1080 pixels along with a 2.5D curved glass. The smartphone is powered by a MediaTek MT6750T octa-core processor along with Mali T860 GPU, which is a pretty old processor. The phone is available in 2GB RAM + 16GB storage and 3GB RAM + 32GB storage options.

Just like the original Asus Zenfone Max, the device comes loaded with the dual-camera setup at the back which bears a combination of a 16-megapixel rear camera with aperture f/1.7 and an 8-megapixel 120-degree wide angle lens. For the front, there is an 8-megapixel selfie shooter with f/2.0, 85-degree wide-angle lens.

The major highlight of the smartphone is the 4130mAh battery along with a 10W charger that the company claims can charge the device from 0 to 100 percent in 3 hours. The phone runs on Android 7.0 Nougat with ZenUI 4.0 running on top of it. On the connectivity front, you get 4G VoLTE, WiFi, Bluetooth, GPS, GLONASS, micro USB port and dual-SIm support. The phone measures 152.6 x 73 x 8.8 mm and weighs 160 grams.