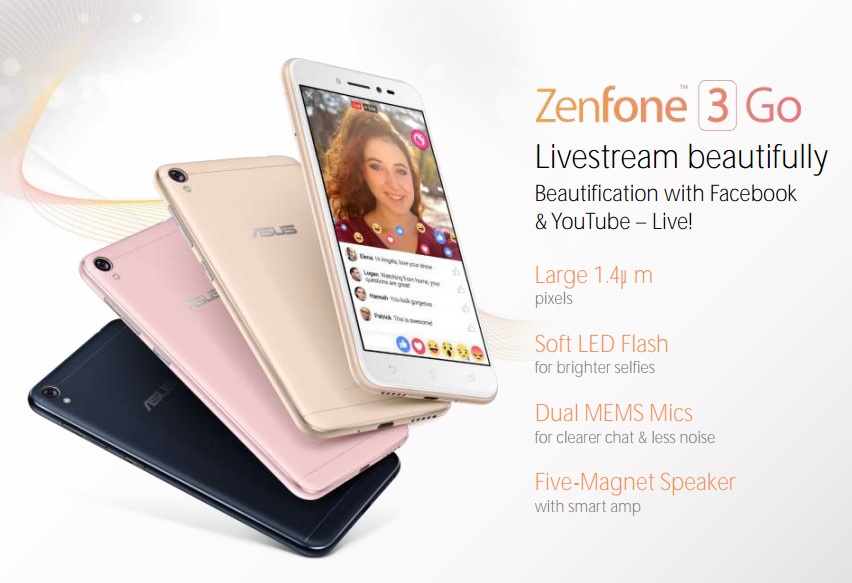 The leaked image shows some interesting features of the upcoming device. It is also reported that the smartphone might be get unveiled during Mobile World Congress (2017).

Asus is reported to add a new member to its Zenfone 3 lineup with the addition of the Zenfone 3 Go smartphone. The latest leaks about the upcoming device reveal some key specs and details.

The leaked image shows some interesting features of the upcoming device. First of all, the Go series basically represents budget lineup and this one will be no different. To start with, the device will come with a 13-megapixel camera with a 1.4-micron pixel size, while for the front, there will be a 5-megapixel shooter with soft LED flash ‘for brighter selfies’.

The design of the smartphone resembles the Zenfone 3 lineup where at the front you will see physical navigation button at the base, while at the front sits secondary camera with an earpiece, LED flash and usual array of sensors. On the right, there is power on/off button and volume rocker while the left houses a SIM slot, which would be hybrid in nature. At the back, the primary back is more circular and is somewhat similar to other devices of Oppo, Vivo etc. available in the market.

Coming to the specs, rumours suggests that the device will come with a 5-inch HD display and will be powered by a Qualcomm Snapdragon 410 processor. The phone will be backed by a 2GB of RAM and 16GB of internal storage. The phone will be equipped with Dual MEMS Mics, which seems to reduce noise reduction, while the five-magnet speaker installed in the smartphone will come with smart amp feature, which would probably adjust sound levels to give a better audio output. Judging by the leaked image, the phone could come with Gold, Rose Gold, and Dark Blue colour variants.

See also:OnePlus 3T 128GB Gunmetal variant to go on sale on Feb 17, but there is a catch

However, it is important to note that the above-mentioned specification is based on some rumours, so we suggest you take this report with a grain of salt. The company is reported to launch the device sometime in first quarter, which makes sense, as it is also reported that Asus will unveil Zenfone 4 series around May.