Asus ROG Phone II was launched in India in September last year. Now the company has revealed that the phone will face a temporary shortage in India.

Asus ROG India has issued an open letter on it Twitter handle stating that the ROG II will face temporary shortages due to the “disruption in the supply chain caused by the prevailing situation in Asia”. It goes on to assure it’s doing everything it can to restore the availability of the Phone II.

The company has not clearly stated the reason for its tweet. But this is due to the recent outbreak of the coronavirus in China. 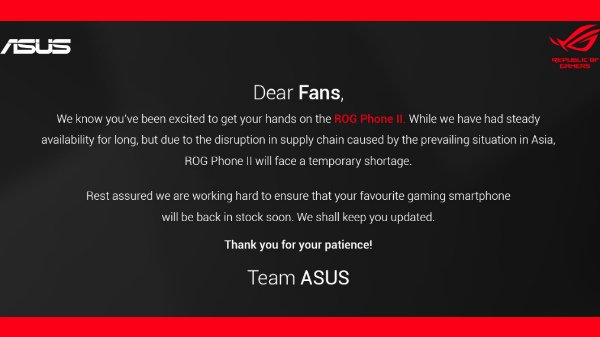 Under the hood, the device is powered by 2.96GHz octa-core Qualcomm Snapdragon 855 Plus processor along with Adreno 640 GPU. It comes equipped with a 48MP Sony IMX586 sensor with f/1.79 aperture. The primary camera is accompanied by a 13MP wide-angle camera with a 125-degrees field of view. On the front, there is a 24MP selfie snapper with f/2.2 aperture.

Asus ROG Phone II is fueled by a 6000mAh battery with 30W Quick Charging 4.0 and 10W reverse charging. It runs on Android 9.0 Pie, which is based on ROG UI and comes with an optical under-display fingerprint scanner.