The biggest announcement we are expecting at the launch is the all-new iPhone X or iPhone 8 with 5.8 inches bezel-less OLED display.

On Tuesday, September 12, Apple is holding its first event in the new Steve Jobs theatre at its new campus in Cupertino. Like, every year, we could expect a slew of announcements fromthe Cupertino-based giant including a tenth anniversary iPhone X along with iPhone 8 and iPhone 8 Plus. So, in order to give you a better perspective of the upcoming launches, we have compiled all the major products Apple will launch on September 12.

iPhone X, iPhone 8 and iPhone 8 Plus

The biggest announcement we are expecting is the new 5.8 inch OLED iPhone. Earlier it was referred as the iPhone 8, but this will be the 10th year of iPhone with that it will be referred as iPhone X. As far as price is concerned we expect the new iPhone to be an expense at a starting price of $1000 and most likely to be around Rs 1 lakh in India due to taxes and all. The new iPhone is expected to be available in three colours — Black, Silver and Blush Gold (Copper Colour).

This year of iPhone we expect big changes, as it is the 10th Anniversary. Up front, we expect the screen to be an edge to edge with a notch at the top for the speaker, camera and sensors. The bezel less display will do away with the home button, instead of at the bottom there will be an on screen function area of sorts or possibly a new gesture control system. At the top of the screen the status bar icons will be split beside the notch, so time, signal, WiFi signal and the battery will be either side of the screen.

The actual build of the phone is expected to be glass on the front and back. This will allow wireless charging, so you can charge without plugging into a cable. With a stainless frame around the edges, we expect to see the same button and speaker cut-out as we have seen in the iPhone 7 and iPhone 7 Plus. However, the lock button is expected to be bigger than it could be used to activate the Siri, more than just locking the phone. 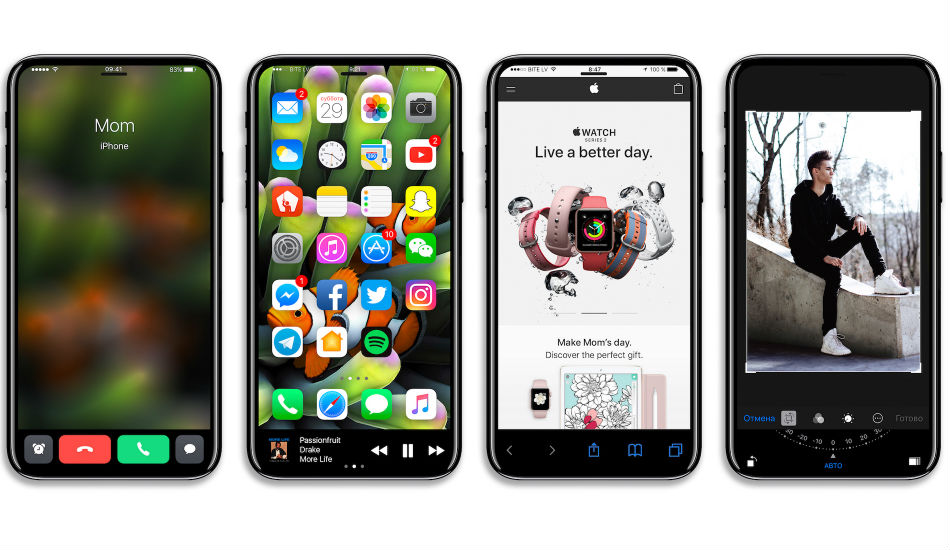 At the back the camera is also different, the dual camera system has been shifted to vertical instead of horizontal and it is larger to the current iPhone 7 Plus cameras. On the inside iPhone X will be powered by a new Apple A11 processor along with 3GB of RAM and 64GB, 256GB and 512GB of storage options.The iPhone X is also expected to come with the IP68 dust and water resistance.

Since there is no home button, TouchID seems to have been omitted from the phone or the Touch ID could be under the display of the phone. It is also expected that the top of the screen will house a new 3D face scanning feature, which would allow for secure fast biometric that replaces Touch ID altogether.

The iPhone X is not the only iPhone we are expecting on the event. Also expected are the update to the current iPhone 7 and iPhone 7 Plus, which will be known as iPhone 8 and iPhone 8 Plus which was earlier rumoured to be iPhone 7s and iPhone 7s Plus. These devices will still have big bezels at the top and bottom, similar to the current versions and home button. The difference we expect is like the iPhone 8, devices will also have a glass back to support wireless charging. Both of them are reported to be powered by the new A11 processor and may come in the same three colours as iPhone X. In terms of RAM and storage, both the devices will sport 32GB, 64GB and 256GB storage options paired with 2GB RAM in iPhone 8 and 3GB RAM in iPhone 8 Plus.

This year, latest iPhones will not be the only attraction. The Cupertino-based tech giant is reported to unveil Apple Watch 3 series, which could be thinner compared to the Apple Watch Series 2. The series is also expected to support LTE, to make it fully independent of the iPhone, which means you will be able to carry your Apple Watch without your iPhone and it will still have the internet connection. It may also feature a new processor and battery life.

Last from the event is to expect a new 4K Apple TV with HDR support. Apple t is planning to add a faster processor that will the set-top box to streaming higher resolution 4K content and High Dynamic Range(HDR) video allow for brighter and more accurate colours to represent real life. The report further highlights that the company will be updating its TV app as well and it might aggregate programming from apps that offer live streaming.