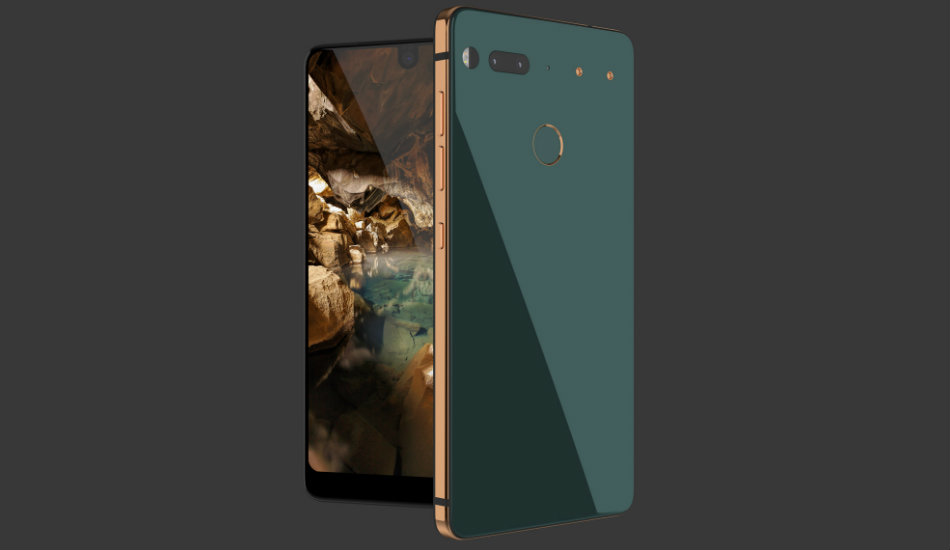 Andy Rubin’s Essential is all set to launch the high-end smartphone today. However, just before the launch, a new report has revealed almost everything about the upcoming smartphone. The device will be available in Black Moon, Steller Grey, Pure White and Ocean Depths colour options.
According to The Verge, the smartphone would be named as Essential Phone and will come with a price tag of $699, to give a stiff competition to Apple and Samsung. The smartphone is now available for pre-order from company’s official website.
Starting with the front, the device has a bezeless display design, similar to what we have seen in the Samsung Galaxy S8 and LG G6. The phone is made from Titanium body and has a ceramic back, while the front is protected with Corning Glass 5 cover glass. The brand says that Titanium is more durable and does not scratch, dent or bend. The back sports a dual-camera setup coupled with autofocus and LED flash and just beneath it, you will find a fingerprint sensor. At the right, there are volume controls and power on/off button
The major highlight of the device is the magnetic connector situated at a top-right corner of the rear panel. The company has introduced a new 360-degree camera, which can be connected easily with the smartphone. The camera comes loaded with dual 12-megapixel fisheye images with f/1.8 aperture and a 210-degree field of view. The camera is able to record 360-degree UHD resolution at 30 fps. Then there is a docking station for the Essential Phone to quickly recharge the smartphone.
Jumping straight to the specifications, the device comes loaded with a 5.71-inch QHD display with a screen resolution of 2560 x 1312 pixels and an unusual aspect ratio of 19:10 coupled with 500nits brightness. The device is powered by the latest Qualcomm Snapdragon 835 processor along with Adreno 540 GPU. The phone is backed by a 4GB of RAM and 128GB of internal storage. Further, The Verge says that the smartphone will run on Ambient OS, which is based on Android, though there is no information about the Android version.
On the camera front, the device sports 13-megapixel dual cameras with one being used to capture RGB, while the other is a monochrome. It also features f/1.85 lens, Hybrid Auto Focus combing Contrast, Phase Detect and IR Laser Assist Focus and 4K video recording at 30fps. For the front, there is an 8MP shooter with f/2.2 fixed hyperfocal lens and 4K video recording. In terms of battery, the phone is juiced up by a 3040mAh with fast charging. On the connectivity front, it supports Bluetooth 5.0, Wi-Fi 802.11a/b/g/n/ac with MIMO, NFC, 4G LTE, USB Type-C and fingerprint sensor. It measures 141.5 x 71.1 x 7.8 mm and weighs approx. 185 grams.