The secondary display of Meizu X2 is expected to clock/time and battery status.

While Meizu has recently launched its flagship smartphones featuring secondary display, the Pro 7 and Pro 7 Plus in China, it’s another smartphone which is dubbed as Meizu X2 has now surfaced online via a couple of alleged live images. As per reports, Meizu X2 will also be a dual-display smartphone and is expected to be unveiled during the second half of this year.

Two images of the said Meizu X2 have leaked online, as per a report of Playfuldroid. The images clearly show the secondary display circular in shape at the back as compared to rectangular-shaped in the recent Meizu Pro 7 and Pro 7 Plus. The secondary display of Meizu X2 is expected to clock/time and battery status. Furthermore, the leak has also revealed that the phone will feature a single rear-camera sensor at the back along with a LED flash on its right. 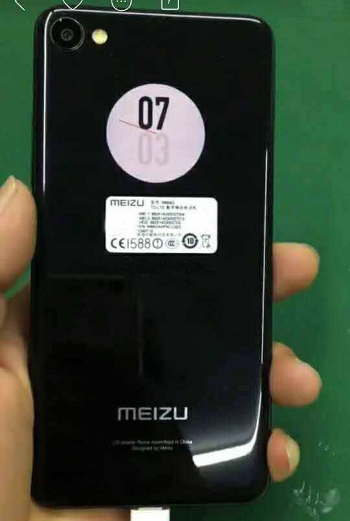 Earlier, an image of the Meizu X2 smartphone was leaked revealing some specifications and the pricing for the Meizu X2. As per the leaked image, Meizu X2 features a 2.5D curved display. It is powered by MediaTek Helio X25. There is a dual camera set up at the back of the device with a dual tone LED flash. However, the camera resolution was not revealed via this leaked image. It will be backed up by a 3350mAh battery with fast charging technology with 18W charger. The physical home button on the front of the device showed a fingerprint scanner. The left and right bezels on the display of the Meizu X2 are almost negligible.

The Meizu X2 will be a successor of Meizu X which was launched in November last year in China. The Meizu X offers a 5.5-inch display with full HD (1920 x 1080 pixels) 2.5D curved glass display. It is powered by an octa-core MediaTek Helio P20 processor and Mali T880 GPU. The smartphone runs on Android 6.0 Marshmallow operating system with FlyMe UI 6.0 on the top of it and is backed up by a 3,200 mAh battery with fast charging technology. There is also fingerprint sensor embedded into the physical home button on the front.

Share
Facebook
Twitter
WhatsApp
ReddIt
Previous articleLG V30 camera could be the best for low-light photography. Here’s why!
Next articleBlackBerry KEYone set to launch today in India: Here is everything you need to know
RELATED STORIES