Yesterday, on World Emoji Day, as twitter buzzed with tweets on emojis, Apple teased a new set of emojis that it’s going to launch later this year.

Emojis, those characters that have helped kill off whole words or even phrases, are still going from strength to strength. While doing more to make the thumb useful than possibly any other invention known to mankind, Emojis and their accomplices, smartphones, continue to evolve further, adding on ever new symbols to substitute words. The joke about the return of hieroglyphs is no longer funny, even as Mummy’s tomind them are thankfully not coming back too.

World Emoji Day is the creation of Jeremy Burge who is the London-based founder of Emojipedia. The word “Emoji” is derived from the Japanese words e (for picture) and moji (for character). July 17, 2002 was the day Apple unveiled its iCal app at MacWorld 2002. According to the New York Times the choice of July 17 was “based on the way the calendar emoji is shown on iPhones”. The said application has an anthem added to it.

Back in 2015, on World Emoji Day,Pepsilaunched PepsiMoji which included an emoji keyboard and custom World Emoji Day Pepsi cans and bottles. Originally released in Canada, it expanded to 100 markets in 2016.

Yesterday,Appleteased about a new set of emojis that it’s going to launch further this year.Earlier there was a report which suggested that Apple will indeed replace the horizontally aligned dual rear camera of the iPhone 7 Plus with a vertically aligned shooter on the iPhone 8. 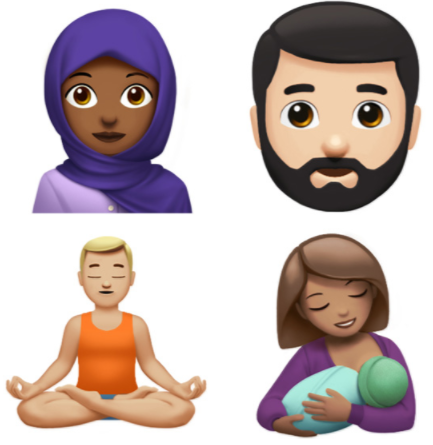 “New emojis include Woman with Headscarf, Bearded Person and Breastfeeding, and food items such as Sandwich and Coconut. More animals and mythical creatures like T-Rex, Zebra, Zombie and Elf are a fun way to describe situations and new Star-Struck and Exploding Head smiley faces make any message more fun”, notes the statement issued by Apple.

The other emojis which were displayed are Zebra, Sandwich, Zombie, T-rex which will be available with iOS 11.In addition to that, the App Store will be highlighting apps to create or do fun things with emoji, and iTunes Movies is featuring emoji in place of select movie titles.