The smartphone will succeed 360 N5, which was launched in China in February this year.

A couple of days back, we have reported that the 360 Mobiles is all set to launch a new N-series smartphone in China on May 23 and started posting the teaser of its upcoming device on its official Weibo page.It was anticipated that this upcoming phone could be none other than the successor of the N5 smartphone, dubbed as 360 N5S. But now the company has confirmed to launch 360 N5S smartphoneon the said date. 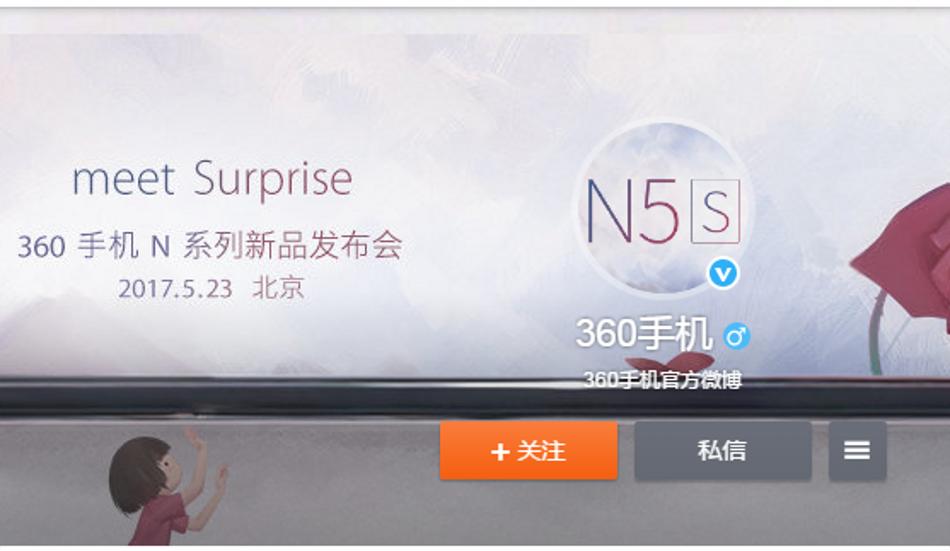 As of now, the company has not revealed any information regarding its specifications. However, here we have collated the expected specifications which were retrieved from the various sources via Weibo.

360 N5S smartphone said to boast a glass design on both the front and back panel and is expected to feature a 5.5-inch full HD display with the resolution of 1920×1080 pixels. It will come equipped with Qualcomm Snapdragon 660 processor, along with 6GB of RAM and 64GB of internal storage. The smartphone will come packed with a large 4100mAh battery.

On the camera front, the 360 N5S will sport a 13-megapixel rear camera with LED flash and a 16-megapixel front-facing camera for selfies and video chats. The smartphone is also be said to house a fingerprint sensor, which will be placed on its back panel. Besides, the smartphone will have 4G, WiFi, NFC, Bluetooth, GPS/AGPS, and a microUSB port. Further, the smartphone is expected to be priced at 1399 yuan, which is approximately Rs 13,072.

To recall, 360 N5 was launched in China in February this year and had two storage variants- 32GB and 64GB. It has a metal unibody design and features a 5.5 inch full HD display with 1920×1080 pixels resolution. The device is powered by a 1.8 GHz octa-core Snapdragon 653 processor, along with 6GB of RAM and 32GB/6GB of internal storage with expandable storage of up to 128GB via microSD card.

On the camera front, the smartphone offers a 13-megapixel rear camera with PDAF, dual LED flash, an 8-megapixel front camera with Soft light and FotoNation 4.0. It gets its strength from good 4,000mAh non-removable battery with Quick Charge 3.0 support. The smartphone also houses a fingerprint sensor, which sits on the rear panel of the device.

Share
Facebook
Twitter
WhatsApp
ReddIt
Previous articleIdea partners with Flipkart to offer best deals on 4G smartphones
Next articleGoogle Assistant is now on iOS: Here’s what it can do and what it can’t
RELATED STORIES