All the Canvas series phones of Micromax are said to get the update.

Micromax will soon release the Android 4.4 KitKat version for 10 of its smartphones, according to the latest tweet of MMXnewscaster.

The devices that are said to get the update include Micromax Canvas Turbo A250, Canvas Doodle 2 A240, Canvas 4 A210, Canvas HD A116, Canvas HD A116i, Canvas Doodle A111, Canvas 2 A110, and Canvas 2 Plus A110Q. There is an yet-to-be-announced model as well, which is identified as Canvas A200. Note that this model was recently in the news; many reports claimed that Micromax will release the A200 with 4.7 inch display and quad core processor.

Micromax Canvas A117 Magnus, A115 Canvas 3D, Canvas 2.2 A114, Canvas A113 Ego, A101 Superfone, and Superfone Canvas A100 are also said to get the latest Android version. However, the report has not said anything about the exact timeline of the update. 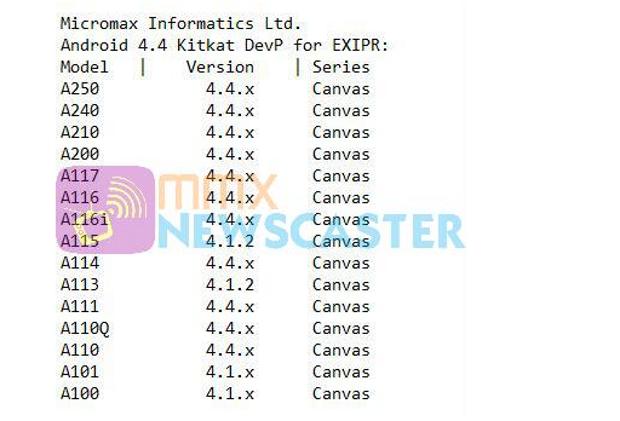 None of the Indian device maker have released the new Android version for their devices. The Android KitKat comes with a more polished design, improved performance, and new features. The latest Android version optimises memory and improves the touchscreen response. It brings a new contacts application that automatically prioritises contacts based on whom you call the most. It also has a better book reading app that hides everything else like navigation bar and the menu at the bottom of the screen so that you can only see the contents of your e-book.