Spice Stellar Mettle Icon Mi-506 was launched earlier this year for Rs 6,999. It has a 5 inch touchscreen, 1.3 Ghz dual core processor, 512 MB RAM, 4 GB ROM, an expandable storage slot that can hold a micro SD card of upto 32 GB, and Android 4.2 Jelly Bean operating system. Besides, it has an 8 megapixel rear camera, a 1.3 megapixel front camera, and an 1800 mAh battery. 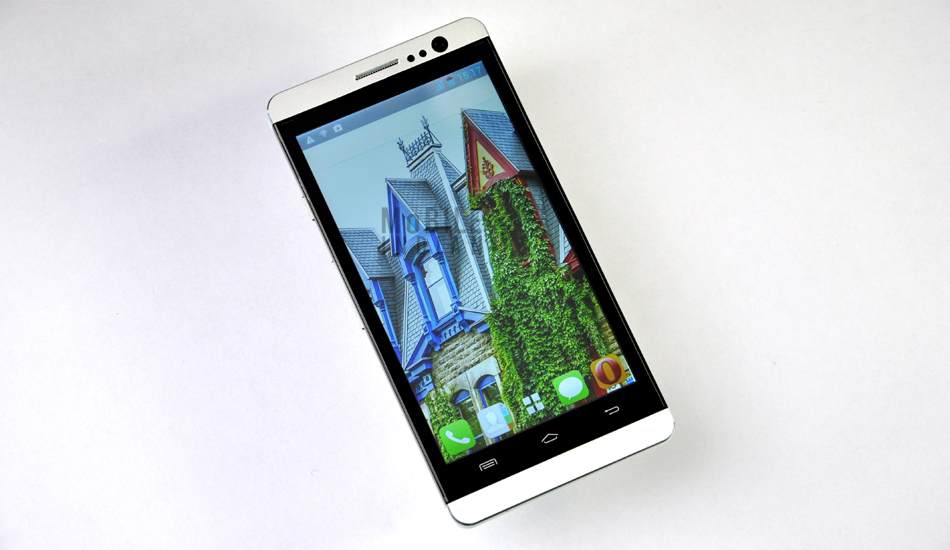 Earlier, such specification would have been considered quite good but not now after the launch of Motorola Moto E which also costs Rs 6,999 but offers 4.3 inch touchscreen with qHD resolution and Corning Gorilla Glass 3. It has 1 GB RAM and the latest Android KitKat operating system. 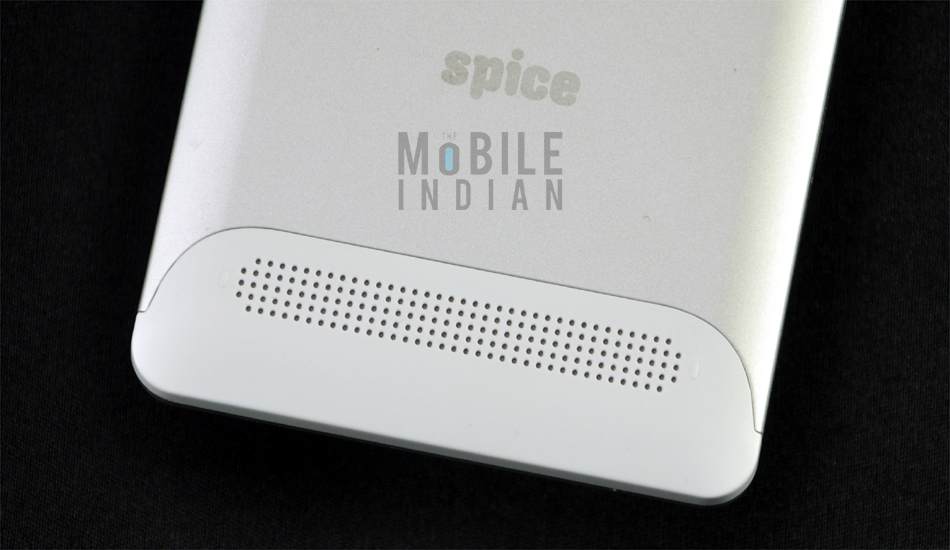 So while reviewing the Stellar Mettle Icon, we had a major question in front of us: Is it better than the much celebrated Moto E? 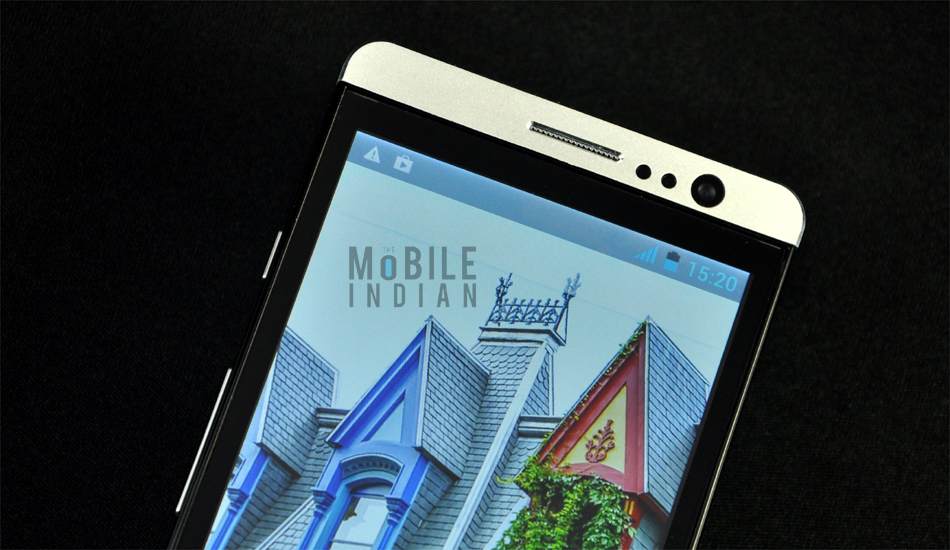 Since we have not reviewed Moto E, we cannot answer this question but I will here reveal the quality and features of the Stellar Mettle Icon which I hope will help you solve the above question.

The Spice Stellar Mettle Icon would remind you of HTC's high end smartphones. Infact, many people at first look mistook it for a new HTC handset. This is probably due to the two metal plates at the top and bottom of the display. Thanks to these broad metal plates, the device looks like a high end device. Not only that, sharp leaser cuts around the front part and a thin metal strip around the rear camera module, and thick sides further accentuates its looks.

The rear panel is also artistically divided into three parts - the middle part which constitutes the bulk of the rear panel is made of metal while the other two parts on either side of this middle portion come in white colour. 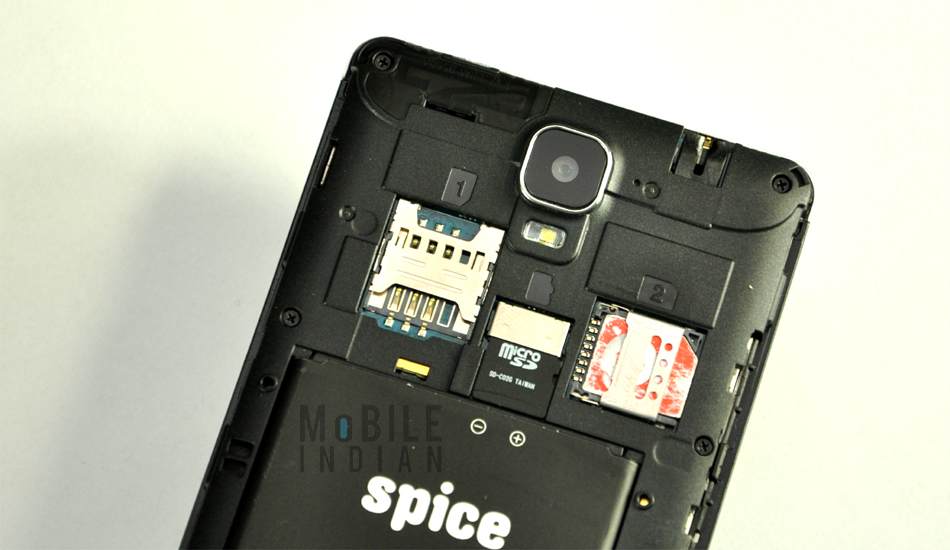 The handset though is a bit heavy, measuring 177 grams. However, it is a bit tough and can withstand few jerks. Thankfully, the rear panel is not slippery or a finger print magnet. 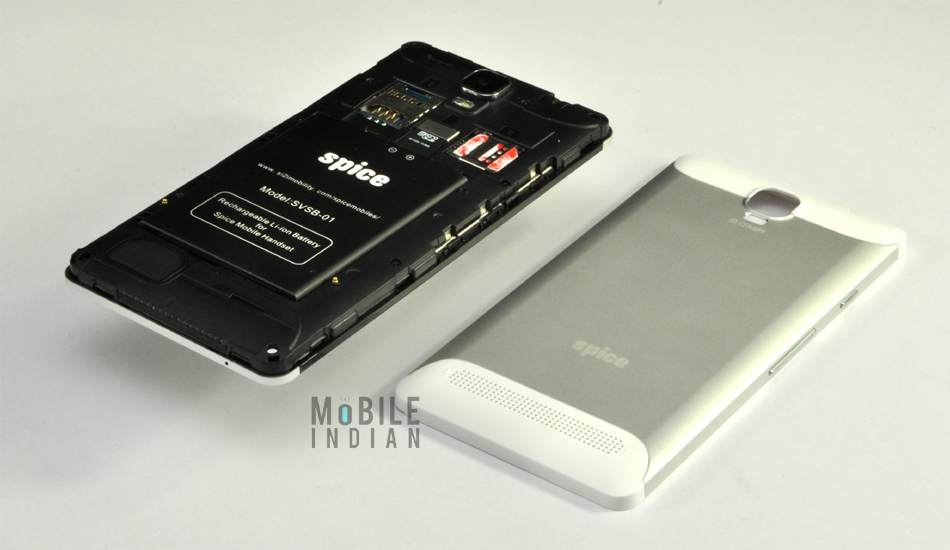 The volume rocker and the power button are placed on the left hand side but with enough gap between them so you won't accidentally press the power button while trying to increase the volume. The micro USB port is at the right hand side while the 3.5 mm jack is at the top. A speaker grill is at the back panel while there are three soft touch buttons just below the display.

All in all, the Spice Stellar Mettle Icon is a well-built smartphone and looks like a high end smartphone though priced so cheap.

There is a 5 inch display in the Spice Stellar Mettle Icon. Such a big display in an affordable display is certainly welcome. However, the display has poor viewing angle. Also, brightness levels are not that good for outdoors. 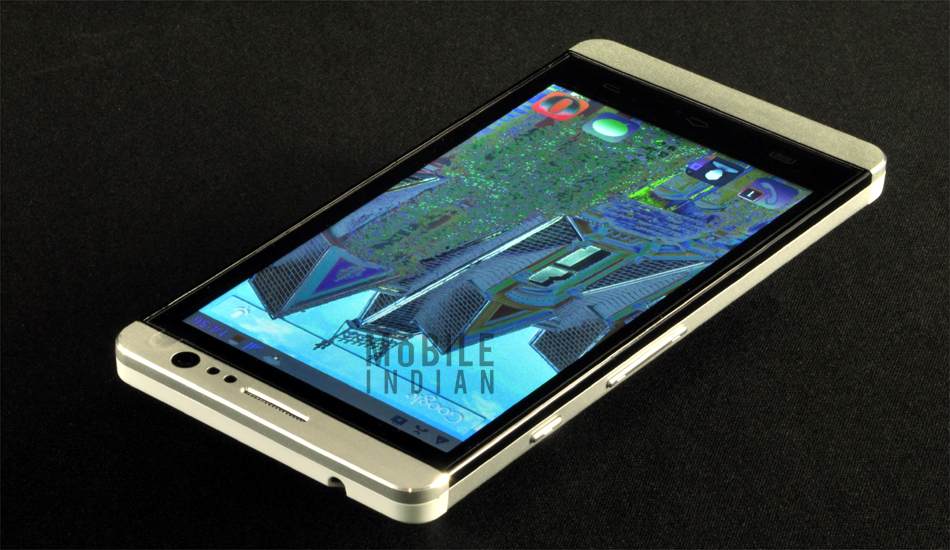 I though never faced any issue vis-a-vis touch mechanism in the Mettle Icon. Its 854x480 pixels resolution is quite common to handsets in this price segment. 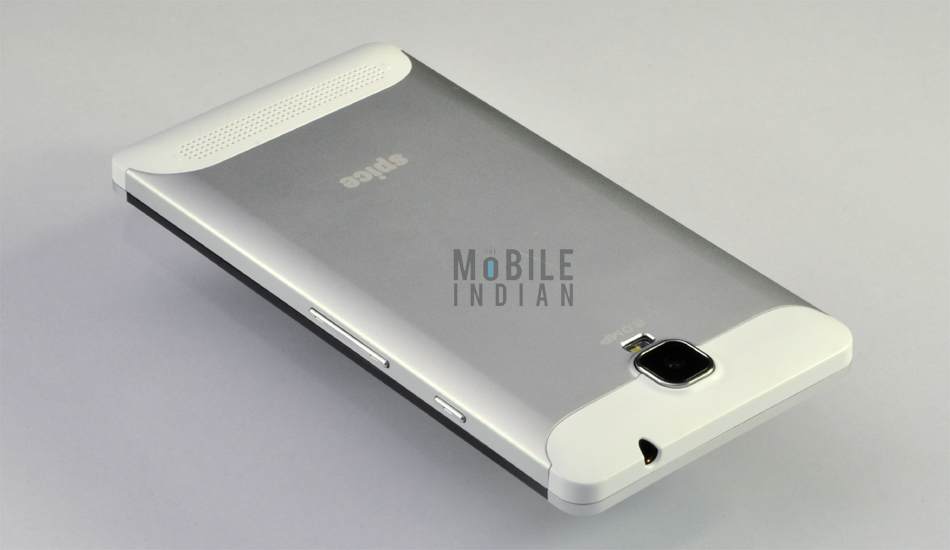 The Mettle Icon offers decent performance with its 512 MB RAM, and 1.3 GHz dual core processor. During day to day tasks it never showed any lags. The phone also manages to play games like Temple Run 2 with ease. It even managed to run the Blood and Glory but do not expect to play more graphics heavy game. But for a handset priced below Rs 7,000, such a performance is appreciable.

The Spice Stellar Mettle Icon has an 8 megapixel auto focus camera in the rear. There is an LED flash in the rear panel as well while in the front there is a 1.3 megapixel camera. 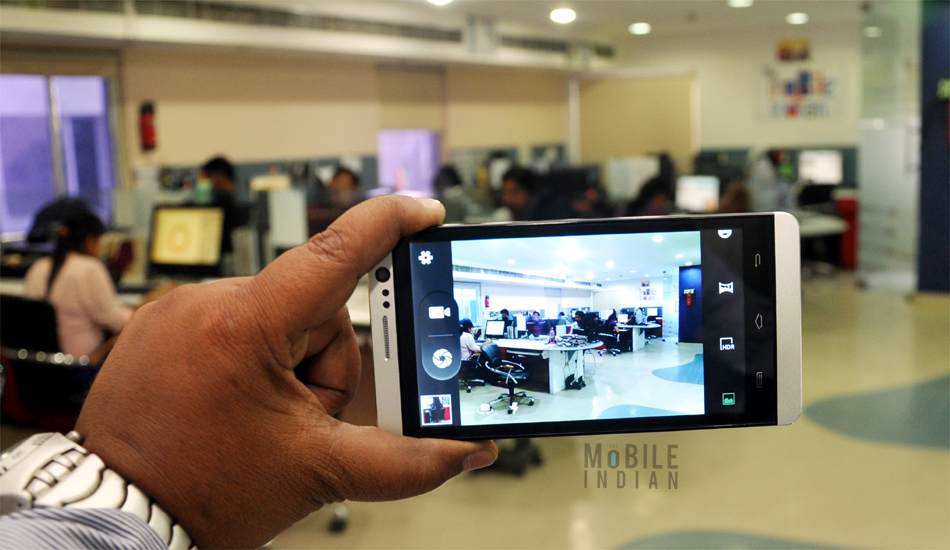 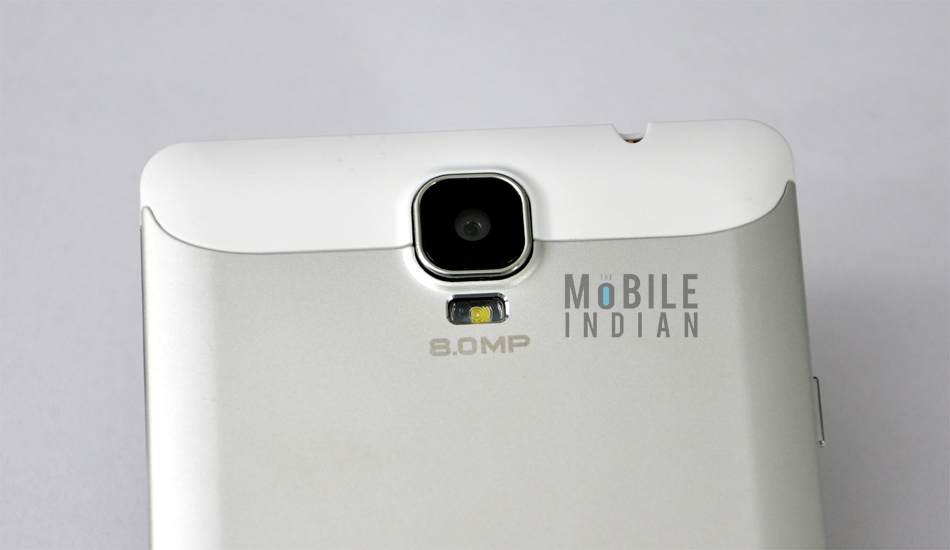 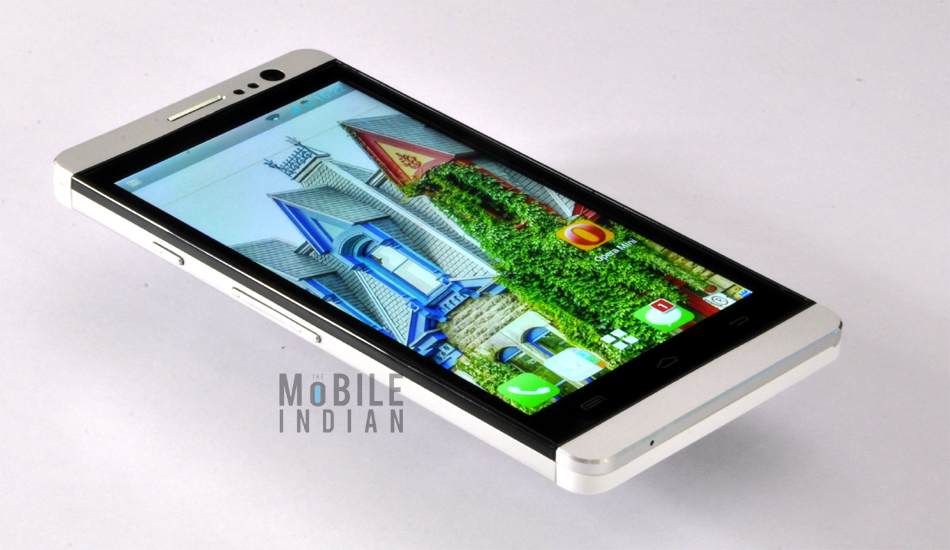 For a handset priced below Rs 7,000, such figures are definitely appreciable but you should not expect much from it. The rear camera does have decent resolution and manages to capture colours nicely. However, it takes time to focus and isn't that good in low light. The front camera is okay for video calling but not for selfies.

This Spice smartphone has 4 GB internal storage of which only 1.48 GB remains for the user. You can though use a micro SD card, up to 32 GB, through its expandable storage slot to expand its memory. The handset also allows shifting apps to its expandable memory. This is becoming the default combination in most phones under Rs 7,000. 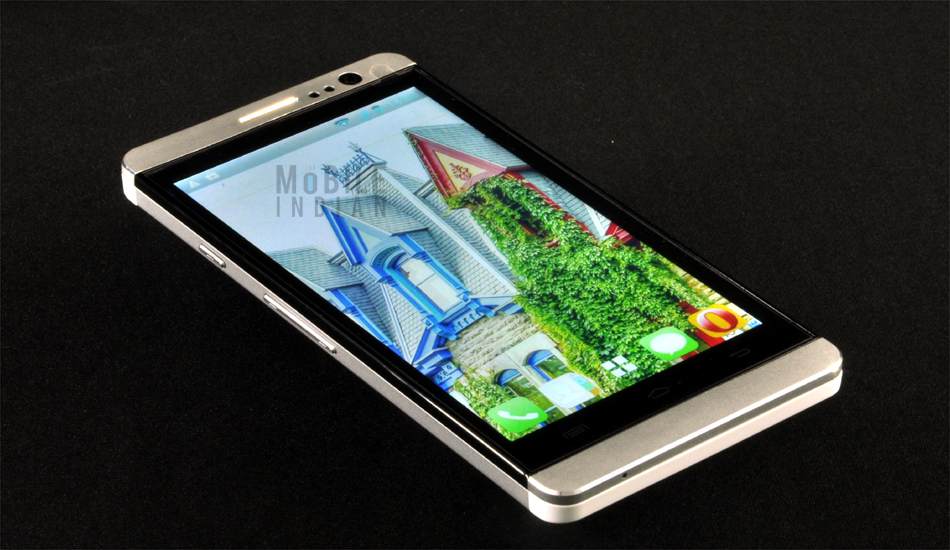 Like most affordable handsets, it too has two SIM slots. Spice has wisely kept one slot for micro SIM cards while the other is meant for regular SIMs. Both the SIM slots are placed beneath the back panel. One of the slots support 3G networks and it has WiFi as well for internet connectivity. For file transfers, it has Bluetooth and micro USB port.

Rating for memory and connectivity: 7/10

The Spice Stellar Mettle Icon comes with an 1800 mAh battery which comfortably lasts a day with two SIM with average usage. Even if you are a heavy user, you will get 7-8 hours of battery life easily.

The specification sheet of Spice Stellar Mettle Icon does not speak much and makes it look pale in front of its rivals like Motorola Moto E, Micromax Canvas Unite, Karbonn Titanium S1 Plus etc. However, it offers decent performance, especially when it comes to battery life. Its 1.3 GHz Mediatek dual core processor and 512 MB RAM is also good enough for most day to day tasks and mid to high end games. The Mettle Icon is also one of the best looking device in its range. The camera output of Spice Stellar Mettle Icon is not as per our expectation but in affordable segment it is hard to find a better alternative. The display of Mettle Icon could have been much better.