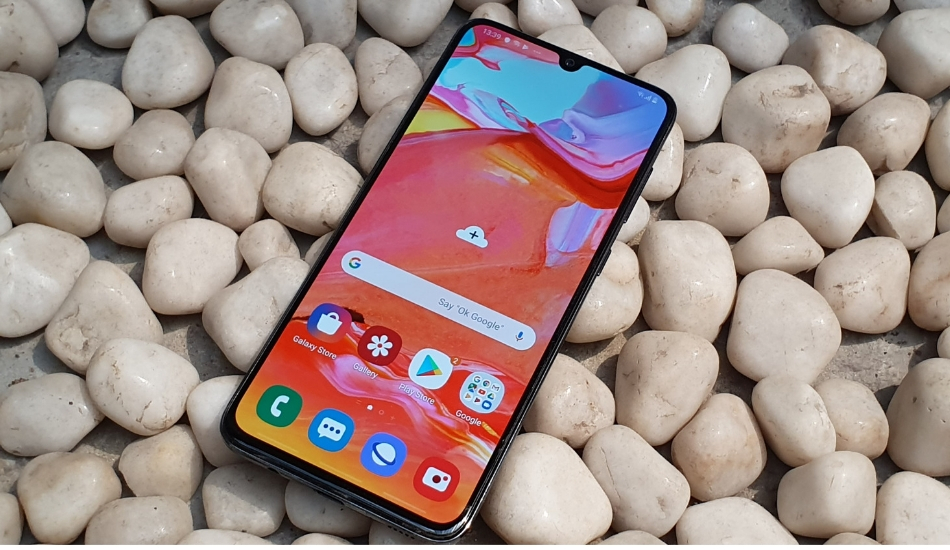 Samsung Galaxy A70, the latest addition to the A series of Samsung is out. It has a got a price tag of Rs 28,990 and will be available from May 1, 2019, at Samsung Stores and Flipkart. Here we present to you the first impression of the smartphone.

Samsung Galaxy A70, the latest addition to the A series of Samsung is out. It has a got a price tag of Rs 28,990 and will be available from May 1, 2019, at Samsung Stores and Flipkart. Here we present to you the first impression of the smartphone.

If you look at Galaxy A70 it seems like the phone has a glass back but it is not the case. It is made of plastic. As a result, the phone is pretty light but doesn’t give you the same feeling as a smartphone having a glass body. The design language is similar to what we have seen in other Galaxy A Series smartphones like A50, A30 and A20. A70 has dedicated slots for two SIMs and one microSD Card. In a nutshell, there is nothing unique in terms of design in Galaxy A70 as compared to other Galaxy A series of smartphones. 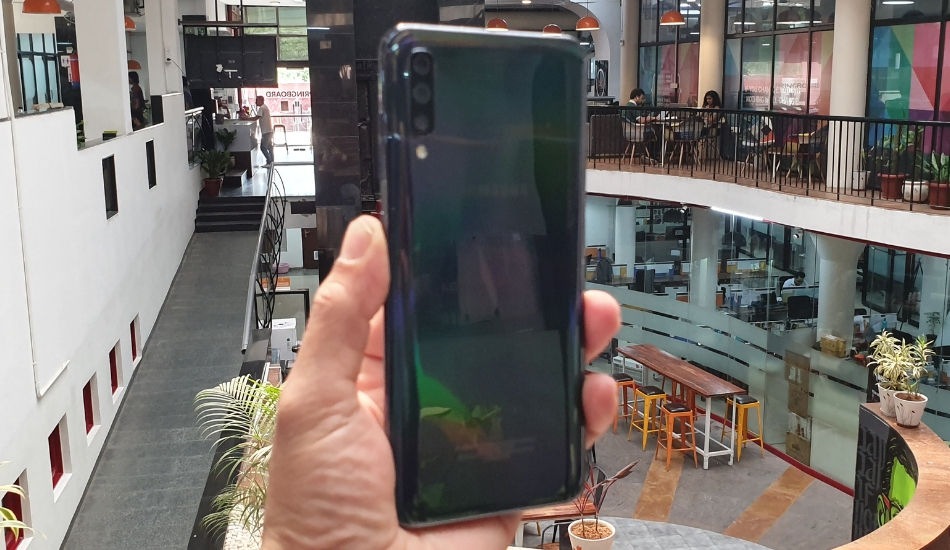 Samsung galaxy A70 has a water drop-style notch, 6.7-inch full HD+ (1080×2400 pixels) Super AMOLED screen with a 20:9 aspect ratio. It is vibrant and punchy with nice vivid colours. The smartphone comes with Widevine L1 Certification for streaming of true HD content and it is equipped with Dolby Atmos which in our testing improved the audio output quality through earphones. It would be safe to say that in its price segment its display is among the best. 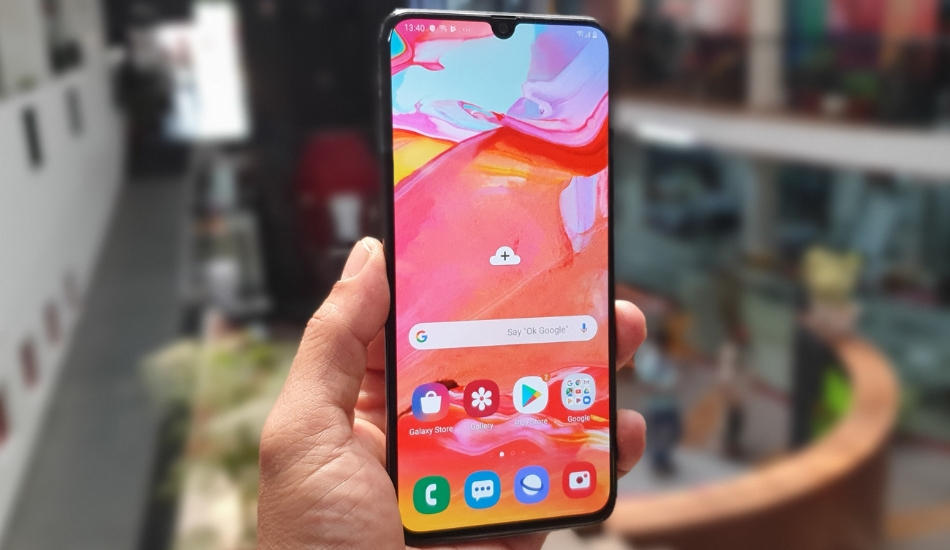 Galaxy A70 is powered by a Qualcomm’s Snapdragon 675 SoC, which is also present in Vivo V15 Pro which is priced at Rs 26,799 and Redmi Note 7 Pro which is available for Rs 19,999. It has a 6GB of RAM along with 128GB of internal storage which is further expandable to 512GB via microSD card. We did find the phone responsive and it didn’t show any signs of lagging during our brief test. 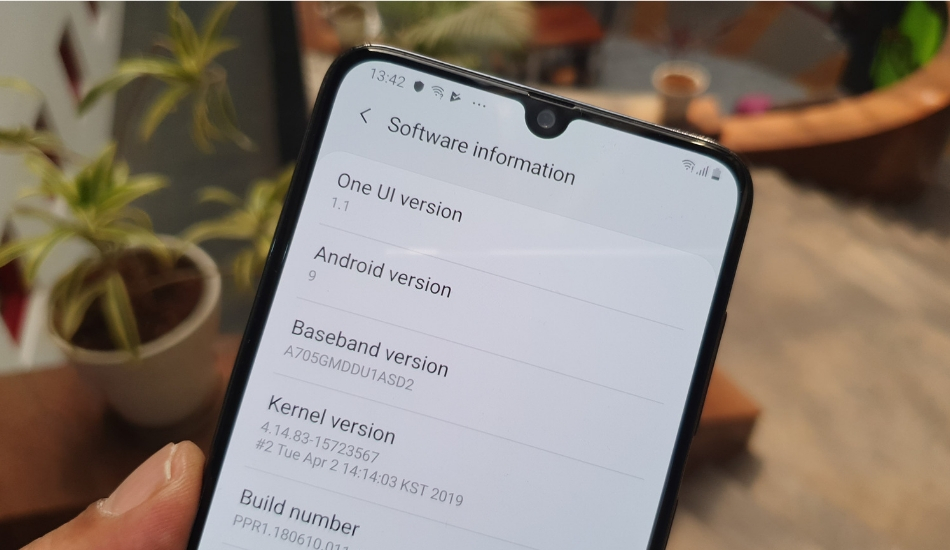 Galaxy A70 runs of Android 9 Pie with One UI. The new UI is smooth and snappy. The only issue we noticed when we inserted the SIM was that all the OTP message were not coming in a copy-paste format. One had to open the SMS app and copy it from there. We will talk about the performance, gaming capabilities of the device in our detailed review. 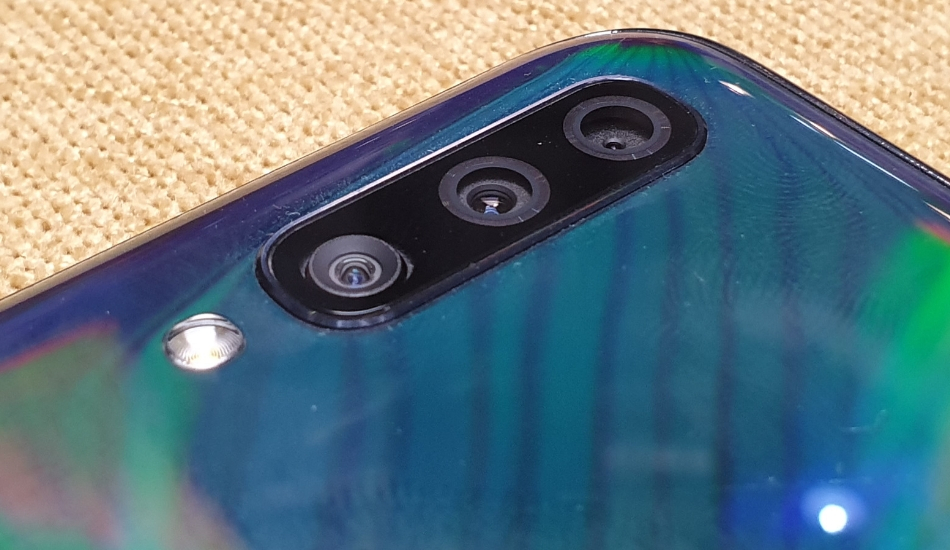 The picture quality from both front and the rear camera were good in natural night. The slow motion and hyper-lapse modes delivered as expected. In the low light, we encountered a strange issue. When we captured the shot using the main camera the picture captured a good amount of lighting but when we used the wide angle lens to capture the same shot picture was a bit dark. We also felt the portrait video feature could have been added to the camera app along with post-processing functionality to manage the dept effect in portrait shots. Stay tuned for a detailed camera review.

Camera Samples of Samsung Galaxy A70

Samsung Galaxy A70 comes with a 4,500mAh battery and 25 Watt Super fast charger which is first the price segment. On a full recharge, one can expect a day usage without any hiccups. We will share more details about charging time and use case scenarios in our review.

Samsung has a simple vision for 2019. To have a device in every price segment. Galaxy A70 is trying to attract consumers who a budget of around Rs 30,000. So should they buy it? Well, A70 gets lots of ticks especially in display, battery and camera department but we will share the final verdict in our review because that will give you a complete picture of the device.