Oppo R7 Plus Review: Midrange chipset lets it down 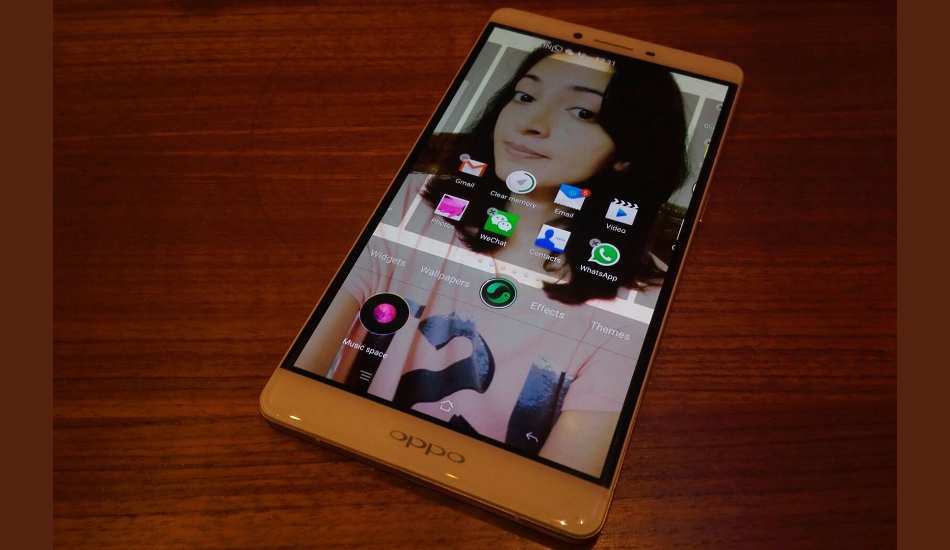 Oppo R7 Plus is not big only in terms of size, it scores big in most departments as well.

Attractive Metal Design; is slim and lightweight Good battery back up Superb front and rear cameras

Screen prone to scratches Hybrid SIM slot Lags while playing high end games, should have a better processor No FM radio or NFC

The moment we hear a 6 inch display, we tend to form an image in our mind that such smartphones are usually very difficult to use. But Oppo R7 Plus feels just good enough. True, it is quite big with a height of 158 mm and width of 82 mm but it is just 7.75 mm thick and that helps in griping the phone better. The phone also weighs 192 grams despite having a huge display and a 4100 mAh battery. 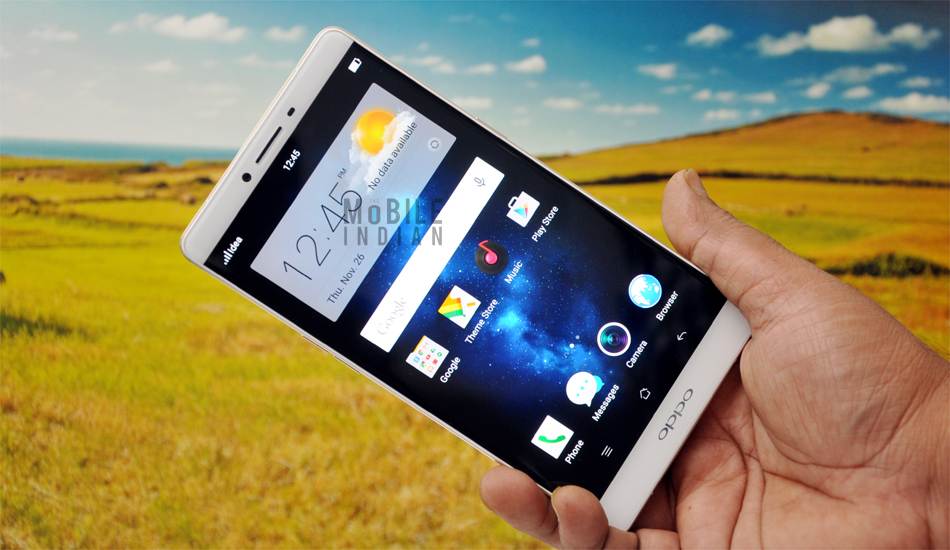 With a metallic back panel, the R7 Plus certainly looks quite rich but it may feel slippery for some. Despite its huge size, I had no problem in reaching out to its volume rocker located in the left hand side or its power button in the left. A fingerprint sensor is in the back panel just below the rear camera while a hybrid SIM slot is on the right hand side. 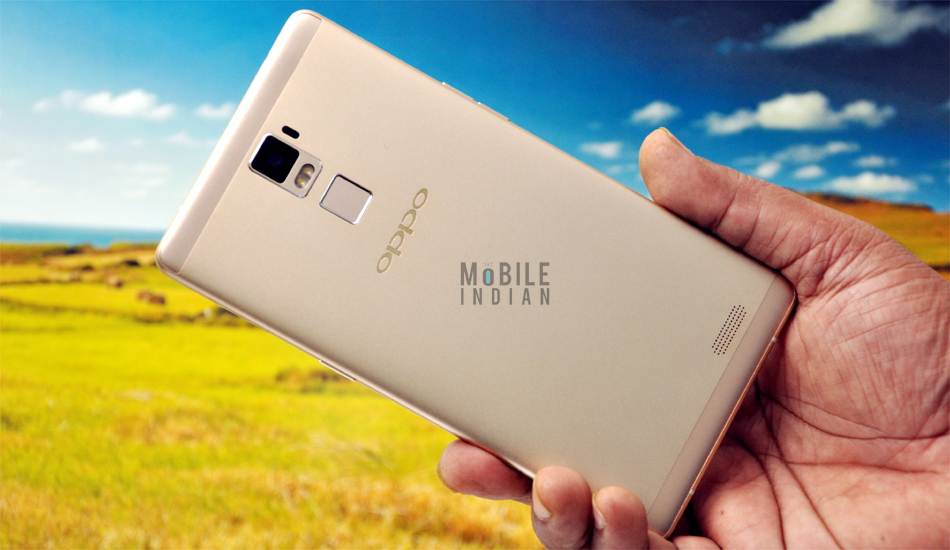 The hybrid SIM slot has place for two nano SIM card slots; in the second slot you can use a micro SD card too. 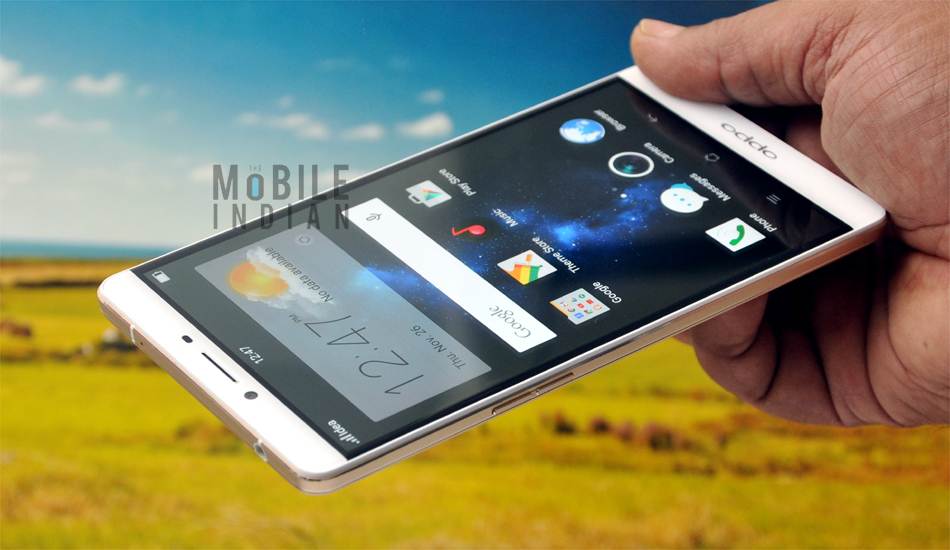 The 6 inch display has AMOLED technology and thus has rich colour output. Additionally, it offers full high definition or 1920×1080 pixels resolution, thereby offering a decent visual experience. Anyone who loves games and movies will relish this display for its size and output for sure. The brightness levels and the touchscreen response is also top notch. The screen however is prone to scratches, so better use a screen protector.

With a huge display, the R7 Plus requires plenty of power too. Thus Oppo has fitted a huge 4100 mAh battery in the phone and its benefits reflect in the day to day usage. With two SIM cards, round the clock internet connectivity, the phone managed to stay alive for more than 12 hours even with a lot of gaming. Note that my Gmail, Twitter and Facebook accounts were also synced which require continuous syncing in the background thus draining the power too. 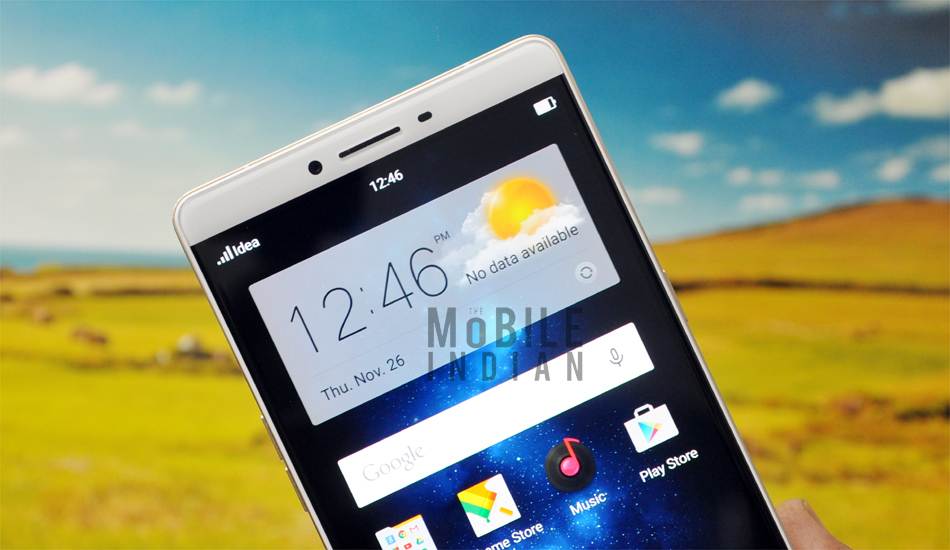 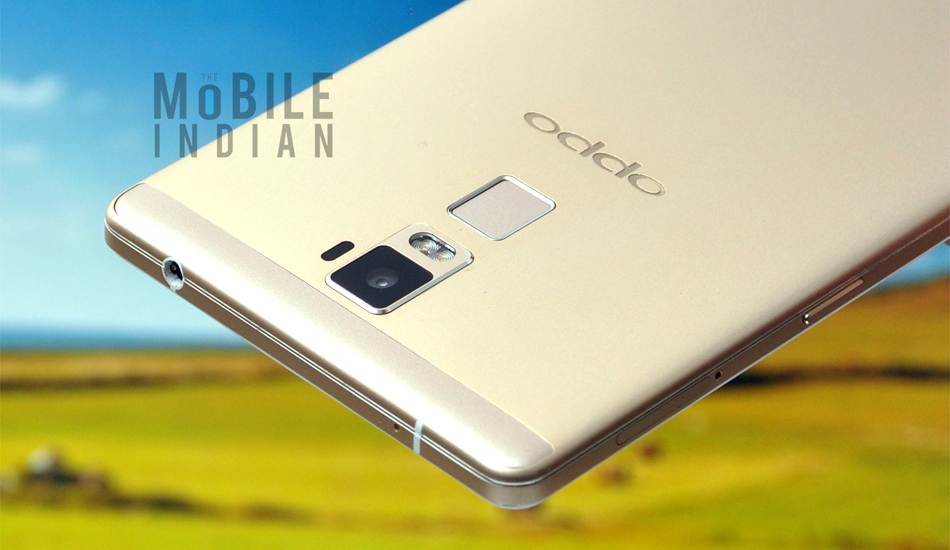 To be more specific, we played a video of 70 minutes with medium brightness and volume, one active SIM card but without any internet connectivity. In this test, the R7 Plus consumed just 12 per cent of its charge. And then I played the Injustice Gods Among Us game for another half an hour with ‘high brightness’ and WiFi, in which the handset consumed just 12 per cent charge. From this you can imagine how long its battery will last in day to day usage.

The Oppo R7 Plus comes with a 13 megapixel rear camera and an 8 megapixel front camera. In the rear panel, there are two LED flash lights as well. The R7 Plus’s camera is also endowed with many features. For the selfies, there is GIF mode, Ultra HD, Beautify, Audio Photo while the rear camera has additional HDR, Panorama, Time Lapse and RAW image modes. 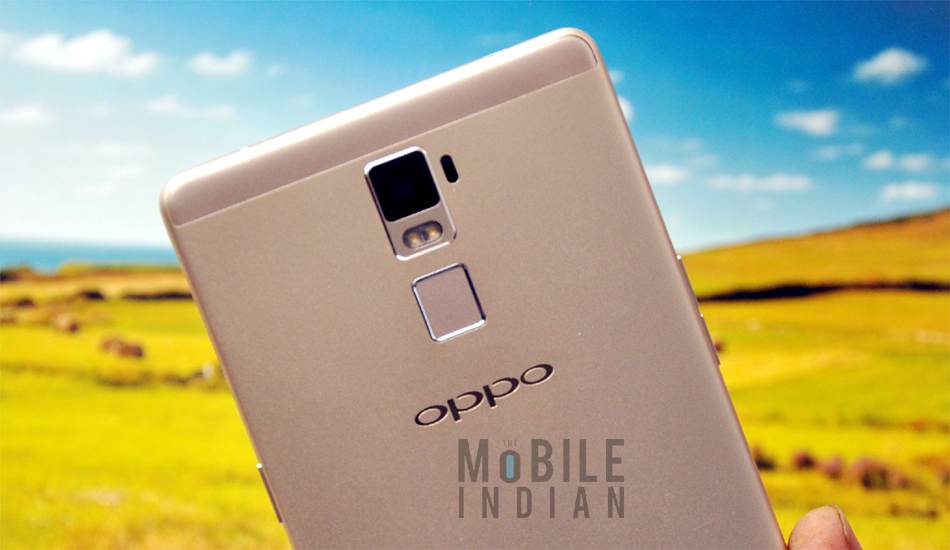 Both the cameras are quite fast and they perform equally well in both good lighting as well as in low light. The rear camera has no issues while capturing macro photography and even in zoom mode it offers plenty of details. With RAW mode, you can capture unadulterated images. The front camera also offers plenty of detail and captures colours nicely as the rear camera. 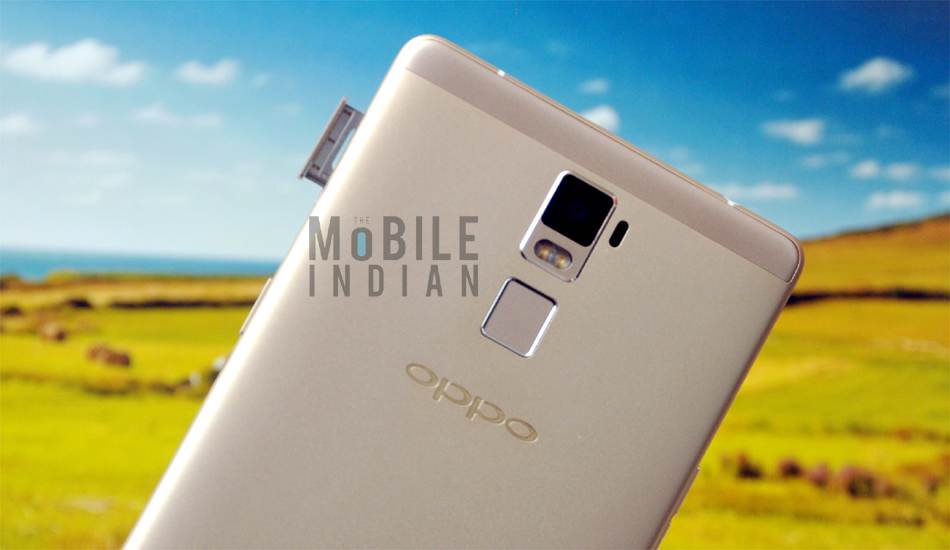 In short, the Oppo R7 Plus is a terrific camera smartphone. You can check its camera samples here.

The Oppo R7 Plus has the Android 5.1 Lollipop operating system on top of which lies the Color OS 2.1 interface. The UI is nice and simple, and doesn’t have the app drawer. So everything is on the home screen itself. The first page of the home screen is dedicated to the music player. Other difference that you will notice is the ‘Setting’ page where the control functions are divided among General, Sound and Display tags for ease of use. It also allows tweaking the display font, brightness, colour for a soothing experience. 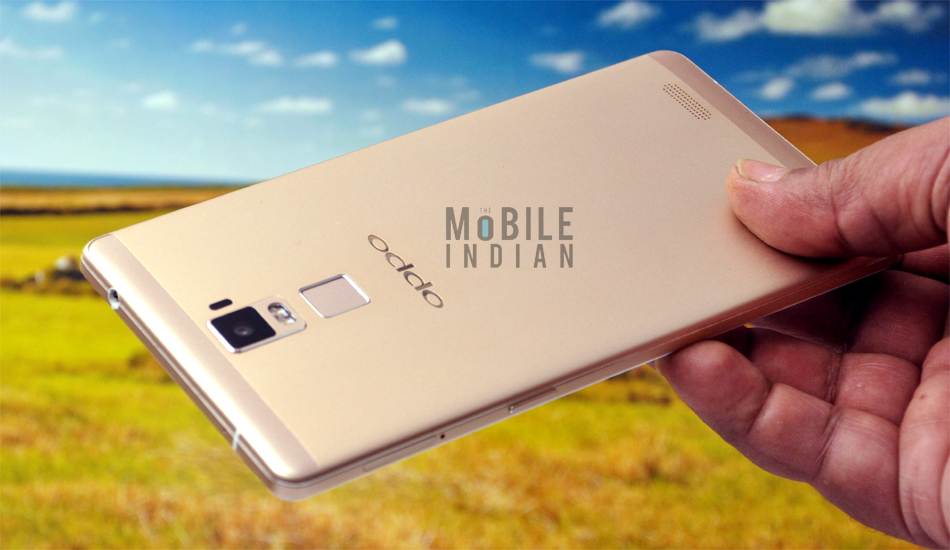 The R7 Plus is armed with the Qualcomm Snapdragon 615 octa core processor, Adreno 405 graphics processor and 3 GB RAM. Being a mid-range device, the R7 Plus should have a better processor but nonetheless, the phone offers lag-free performance mostly but while playing a high end game, Injustice Gods Among Us, the phone used to lag sometime. 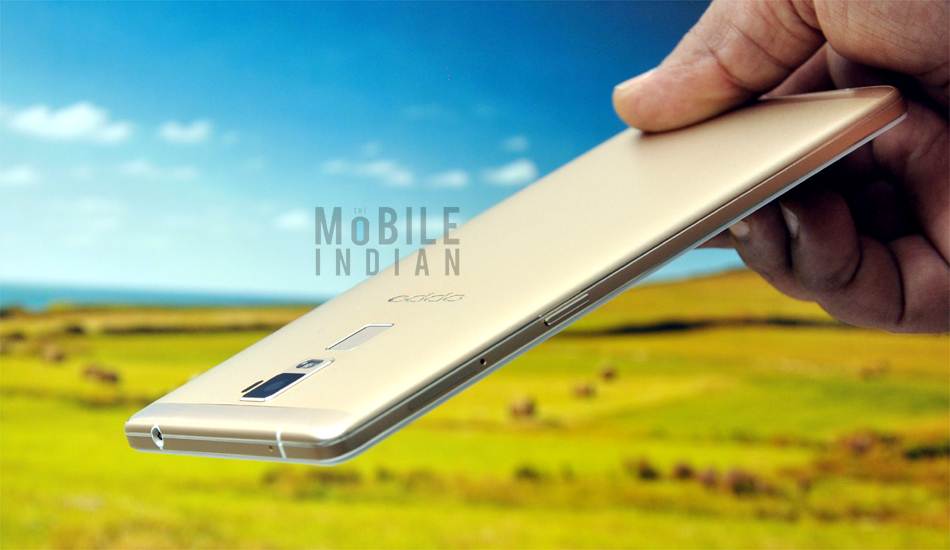 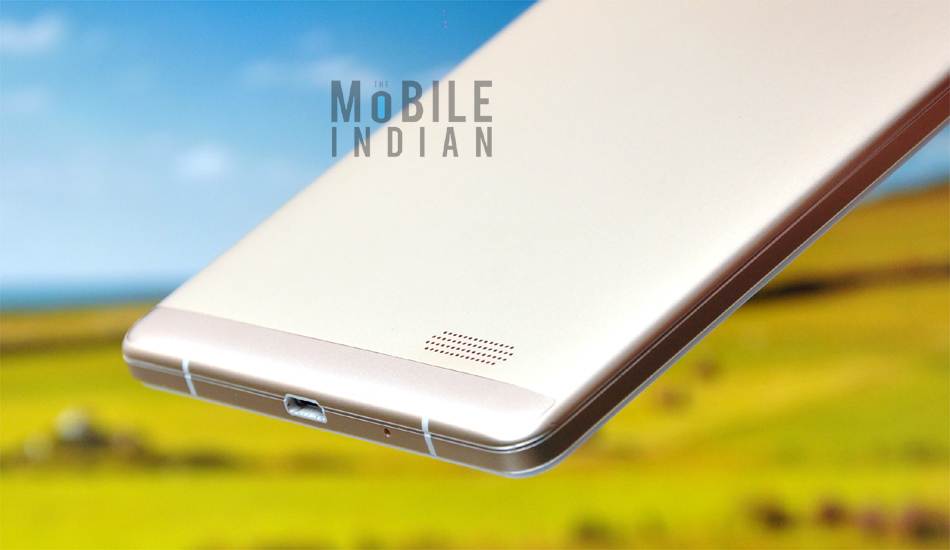 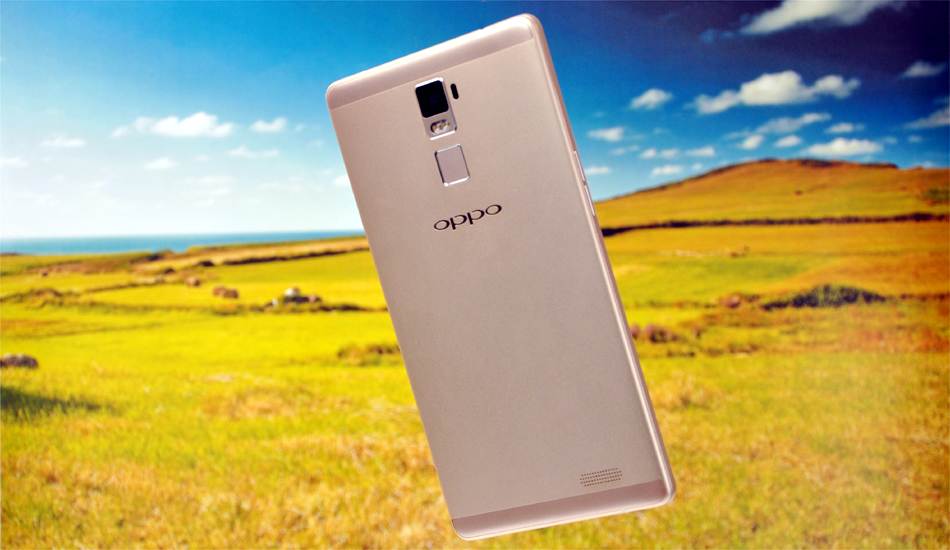 The phone has no FM player though so you have to rely on its music player and video player for entertainment.

The Oppo R7 Plus scores very high on design, camera and battery fronts â€“ the three most important aspects of any smartphone. However, with phones like OnePlus 2, Nexus 5, Sony Xperia Z2, LG G3, Samsung Galaxy Note 3 etc available for less than its price, it is very hard to recommend the R7 Plus considering its mid-range chipset and other cons mentioned above.