Some notable omissions from the Oppo F3 include USB Type C, FM radio and NFC.ffff

Oppo has just strengthened its selfie-focused F series with the addition Oppo F3 smartphone in India. The smartphone comes with a price tag of Rs 19,990 and will be available in Gold and Rose Gold colour options. The main highlight of the device is the dual front-facing camera setup which is a combination of a 16-megapixel sensor and an 8-megapixel sensor while at the back, there is a 13-megapixel camera making it a camera-centric smartphone on paper right off the back.

But will it be enough to make a long-lasting impression on the customers? We got the chance to use the device for a while and here is our first impressions.

Starting with the design, Oppo F3 comes with comes with a metal unibody design. The round curves into the 2.5D curved glass display around the edges making the device easy to hold in hands. For the quick physical overview, the front of the device features a dual-camera setup, a LED flash, a fingerprint sensor embedded into the physical home button key which is quick and accurate.  Thera is a slim antenna line on the two ends of the rear panel. 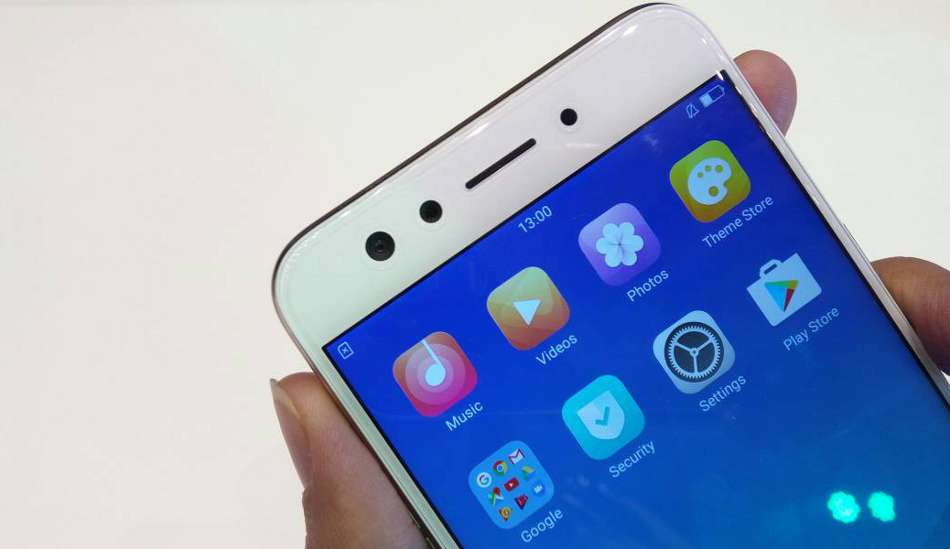 On top, we have one secondary microphone for noise cancellation and nothing else. On the bottom, we have 3.5 mm headphone jack, coupled with coupled with micro USB port and the primary microphone while at the top, we get a single speaker grill. On the right side, we have dedicated Dual nano SIM slots and a microSD card slot. All the three slots can be used simultaneously. Along with it, there is also the power button with ample distance in between them. And on the left, we get the volume rockers. At the back, we get to see a primary camera along with LED flash and the Oppo branding at the bottom. During our brief testing of the device, Oppo F3 felt solid and premium in the hand. Being only 153 grams in weight, the phone is quite light and is comfortable to hold in hand.

Coming to the display, the device sports a 5.5-inch full HD screen with a screen resolution of 1080 x 1920 pixels 2.5D curved glass display with Corning Gorilla Glass 5 protection. The screen looks sharp and well-lit during our brief testing period and we hope it would a good job during our testing period. The display looked decent and bright and the colour seemed to be accurate with impressive touch response. Additionally, the 2.5D curve on the edges further adds up to the premium experience. The Oppo F3 also comes with an 'eye protect mode', which basically acts as a blue light filter for the display and helps alleviate eye strain at night. It will adjust the screen colour to relieve the visual fatigue.

On the hardware front, the smartphone is powered by an octa-core MediaTek MT6750T processor clocked at 1.5GHz along with Mali T860 GPU. It comes with 4GB of RAM and 64GB of internal memory, which can be further expandable up to 128GB via microSD card. That said, the specifications look promising, though there are smartphones vendors like Xiaomi and Motorola, who are offering a much better specs sheet in terms of processor and similar RAM and storage option at a lower price point. We can’t really comment on the performance just yet, however, the time we had the device with us, we didn’t face any issues. It would be interesting to see how well does it perform or will it be able to compete with the competitors in our detailed review. 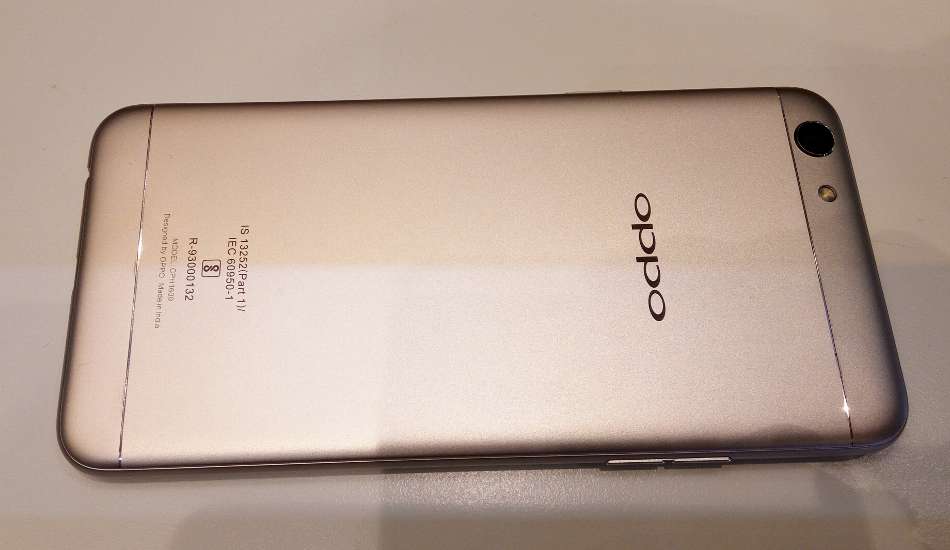 Oppo F3 runs on an older version of Android 6.0 Marshmallow with company’s own Color OS 3.0 running on top of it. Again, on one hand, many manufacturers are giving the latest flavour of Android 7.0 Nougat, on the other, Oppo is still not ready to give up on Marshmallow.  The user interface has its hits and misses and we will be discussing it thoroughly in our review, so keep a tab on this space. All in all, ColorOS remains fairly smooth and functional, although we were just a little disappointed to see a two-year-old operating system (Android 6.0 Marshmallow) still being used on a phone. Especially one that costs this much.

All the apps simple apps like Facebook, WhatsApp, Chrome, Gmail, Youtube opened quite easily, the device did not show any signs of stutters. Although, we did encounter minor lags while switching between multiple apps and loading games. Still, we can say that the performance is not bad either.

Now coming to the device's USP, the camera. The front-facing dual camera set up offers an enhanced depth of field (DOF). DOF, also called focus range or effective focus range is the distance between the nearest and farthest objects in a scene that appears acceptably sharp in an image. Another feature which takes advantage of the dual-front facing camera is the BOKEH effect. If we consider the overall performance of the dual front camera, one can click pretty good selfies if clicked carefully. 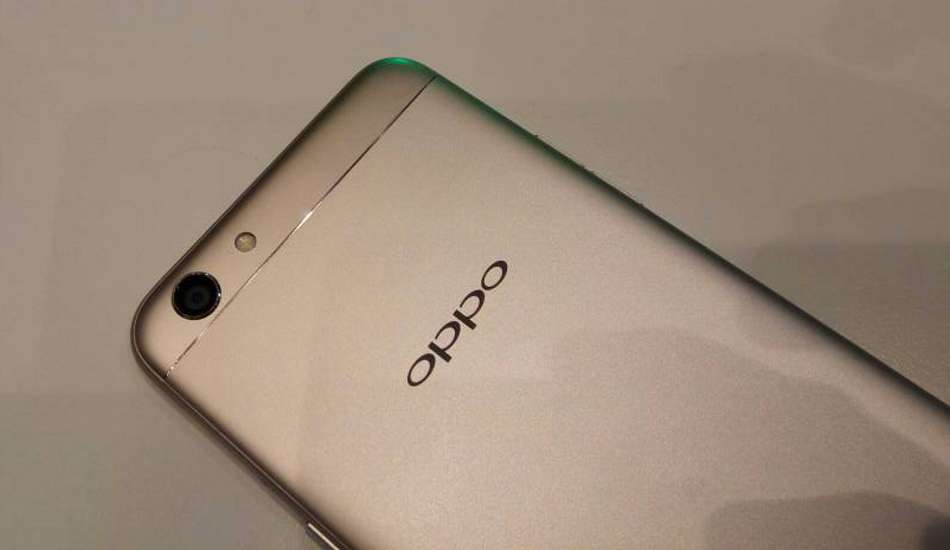 The camera specifications look decent on paper. The device sports dual front camera setup of 16-megapixel with 76.4-degree wide-angle lens, 1/3.1-inch sensor, f/2.0 aperture for low light and a secondary 8-megapixel with a 120-degree wide-angle lens that allows for a 105-degree field of view group selfies and captures better group selfies. The 16-megapixel camera is for solo-selfies and if you are with friends or family and want to click group selfies, you can easily shift to the 8 megapixel wide selfie camera. Both the front cameras work independently and offer a standard selfie mode and a wide angle selfie mode. The front camera has different modes like time-lapse, beauty, panorama and features such as colour filter, double exposure and GIF animation.

The rear camera comes with 13-megapixel with dual-tone LED Flash, PDAF, 1/3-inch sensor, 1.12um pixel size, f/2.2 aperture. When it comes to photography, the pictures I took from the rear 13-megapixel camera also appeared to be decent as well. On the whole, both the front and rear camera of Oppo F3 allows you to take good images. Nevertheless, wait for our detailed camera test for the device to make the final call for the camera performance.

On the battery front, the smartphone is backed by a 3200mAh battery which we expect to last for a full day of regular usage. The battery is not paired with Oppo's VOOC flash charge technology which was in Oppo F3 Plus. 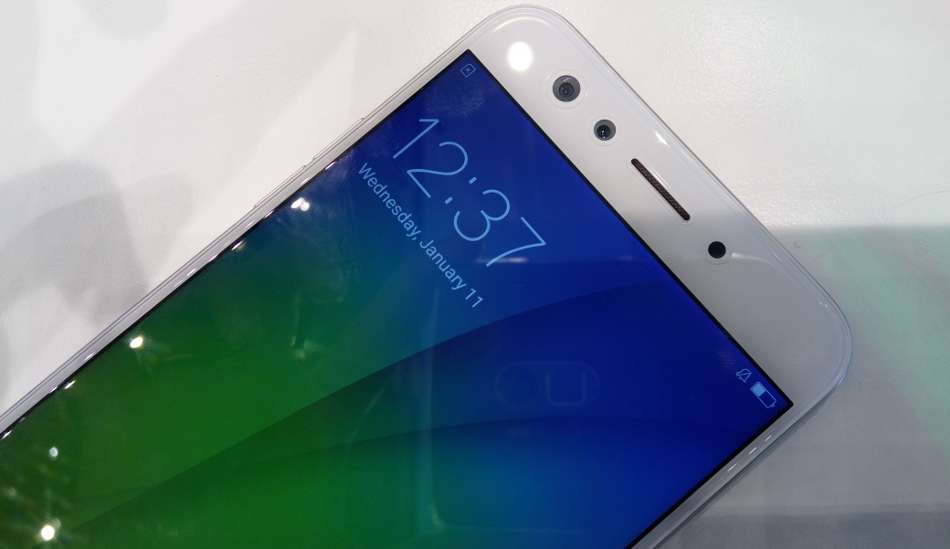 Oppo F3 seems to a well-built and good looking device. At Rs 19,990 it is priced on the higher side but if delivers a good overall performance as claimed by the company it can be considered. So know about it performance in real like scenario keep a look out for our review. Also, in the under Rs 20,000 price segment, Oppo F3 faces stiff competition from Vivo V5s which is priced at Rs 18,990 and Gionee A1 which is priced at Rs Rs 19,999. The Vivo V5s comes with a single 20-megapixel front camera and has almost same specifications as Oppo F3. Gionee A1 comes with a better processor, better battery but with an only single front camera.