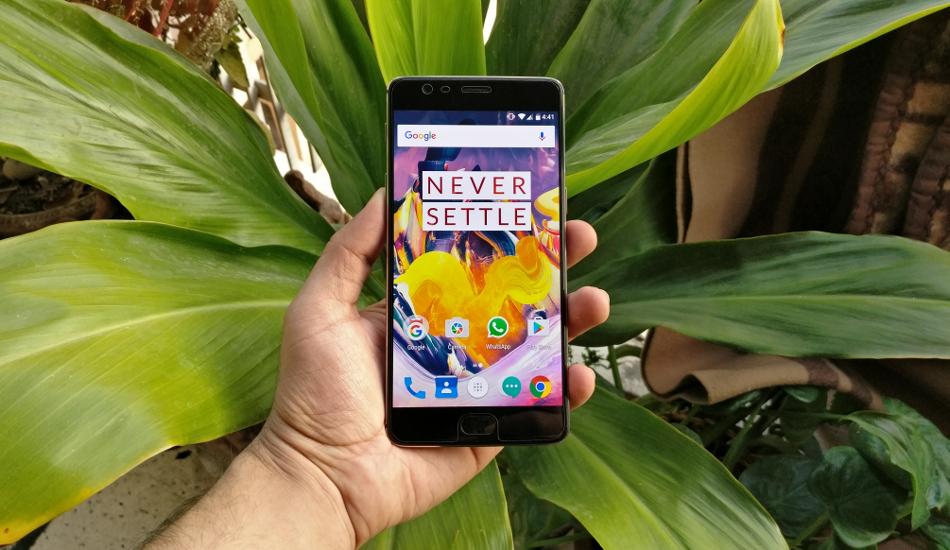 The device is available exclusively via Amazon India starting at Rs 29,999 for 64GB variant.

OnePlus is one of the only few companies which has made its mark in the smartphone industry in such a short span of time. The company entered the smartphone industry with the OnePlus One back in 2014 and since then it has always been a positive upward slope for the company. With every device, OnePlus lives up to its motto ‘Never Settle’ and the latest offering in the name of OnePlus 3T is no exception. The device is available exclusively via Amazon at Rs 29,999 for 64GB variant and Rs 34,999 for 128GB variant. OnePlus 3 was already one of the best devices of 2016 and with the 3T things only get better. Being a OnePlus 3 user, I had the 3T for some time and here is my review for the OnePlus 3T.

The packaging with the OnePlus 3T is exactly same as we got with the OnePlus 3. Opening up the red and white coloured packaging, you get the device on top which actually sits on a compartment containing all the paperwork and the SIM ejector tool. Underneath, you also get a ‘Thank You’ message from OnePlus’s CEO Carl Pei with Rs 300 coupon code to be redeemed on onplusstore.net. Besides, you get the Dash charging power brick which is a 5W 4A charger plus a USB Type-C cable. Not to forget the pre-applied screen protector on the device which this time is much better than the one found on the OnePlus 3.

As with the packaging, OnePlus 3T is identical to the OnePlus 3 in terms of design except for the new Gunmetal Colour. The device is only 7.4 mm thick and is extremely premium to hold in the hand, Thanks to the all aluminium uni-body construction. At the back of the device sits the 16-megapixel camera with LED flash just below that. Now, because the device is so thin, you get that annoying camera hump at the back, however, OnePlus has now included a sapphire glass protection which was just a glass on the OnePlus 3. On the right side are the power button and the SIM tray while on the left sits the volume rockers and the ‘Alert Slider’ which basically enable users to shuffle around Ringing Profile settings even when the device is on standby. Moving on to the bottom, we find the speaker grill on the left followed by the USB Type-C port for charging and data syncing, the primary microphone and the 3.5mm headphone jack. There is nothing at the top. Even though the device sports a 5.5-inch display, it is pretty comfortable to use which can be fully attributed to some sleek design and even thinner bezels. Though you will never want to put a case on your OnePlus 3T but we would recommend you buy one as the device can get really slippery at times.

Coming on to one of the most underrated aspects of both OnePlus 3 and 3T, the display. Similar to the OnePlus 3, the 3T features a 5.5-inch Full HD (1920 x 1080p) Optic-AMOLED display. Even though it is a 1080p, the display on the OnePlus 3T is beautiful and is extremely pleasing to the eyes. The colours pop out of the display and you would love watching your photos and videos on this device. It gets decently bright out in the sunlight and extremely low for that late night chatting sessions. To further make things easy, it also comes with ‘Night Mode’ which removes all the Blue light coming out of the display. And, taking full advantage of the AMOLED display, OnePlus has also given a ‘Dark Theme’ which is spread across the entire user interface saving a fair amount of battery.

Before I get to the actual performance, let’s list out the internals. The OnePlus 3T is powered by a 2.35GHz Qualcomm Snapdragon 821 chipset with Adreno 530 GPU. To complement the top notch CPU and GPU is the whopping 6GB RAM. For the storage, apart from the regular 64GB variant, the 3T also comes with a 128GB variant. There is no expandable storage here as well. Running on Android 6.0.1 Marshmallow with OxygenOS 3.5.4 on top, the OnePlus 3T is by far the quickest device I have ever used. The Snapdragon 821 with 6GB of RAM makes it for the smoothest experience you can have on any Android device. I haven’t used Google’s Pixel but I am pretty sure that OnePlus 3T is on par with it in every aspect. The device is perfect for multitasking and holds most of the apps in memory. Gaming performance is seamless and the device ran every game, we threw at it, without any issues. Further, to my surprise, the device didn’t show signs of heating up even after about 25-30 minutes of gaming. To sum up, OnePlus 3T is that device which will not show any signs of lagging no matter what you treat it with. Compared to OnePlus 3, it is a tad faster only in certain operations but that might be because the OnePlus 3T comes with F2FS (Flash-Friendly File System) while the OnePlus 3 is expected to get it with Android Nougat update.

OnePlus has come a long way from CyanogenMod 11s on the OnePlus One to OxygenOS 3.5.4 on the OnePlus 3T. In my opinion, OxygenOS is a perfect blend of Stock Android with all the necessary customization one would ever want on a smartphone. You can choose between On-Screen and Touch-Capacitive buttons and even swap their functions. Further, you can also add custom actions to each of the buttons. Gestures like ‘Double Tap to Wake’, ‘Flip to Mute’ are also there. The Quick Settings panel resembles the one present on Android Nougat and you can also play around with colour accents apart from earlier mentioned Dark and Light Theme. Shelf is now cleaned up and more refined but still I didn’t happen to use it much during my testing. With the latest OxygenOS built, you also get App Locker through which you can add your fingerprint as well. You can also edit the actions to the three modes available for the Alert Slider. Apart from this, the fingerprint on the OnePlus 3T is one of the fastest you would see on any Android device and is decently accurate most of the times. It also works when the device is on standby.

Now for the camera which surprisingly is one of the best you would see on a OnePlus device. To sum it up in one line, the camera on the OnePlus 3T is really good but it is not the best. The one on the Google’s Pixel or iPhone 7 or even on the Galaxy S7 surely sits above this sensor. But, Nevertheless, the back of the device sports a 16-megapixel sensor with f/2.0 aperture, phase detection autofocus (PDAF), OIS with Electronic Stabilization, LED flash. On the front, you get a bumped up selfie camera of 16-megapixels as well with f/2.0 aperture.

Overall, the rear camera takes really good photos, especially in good lighting conditions. The camera takes care of the dynamic range, exposure and details in most of the pictures. It is also very quick to focus. However, as soon as we move into low-lighting conditions, it struggles. However, it does manage to dig out the commendable amount of details here as well. Further, while the HDR mode does a fabulous job in daylighting, it does tend to make photos noisier in low-light conditions.

Moving on to the 16-megapixel front-facing camera, you will not find much of a difference when compared to the OnePlus 3. However, the new selfie camera on the 3T does tend to produce a little more sharpness and tad bit more natural colours than the OnePlus 3.

One advantage on the OnePlus 3T over the original OnePlus 3 is the bigger battery. The 3T comes with a 3400 mAh non-removable battery. In my normal usage, the device lasted about 1.5 days and even 2 days on some days with an average Screen On Time (SOT) of just over 6 hours. While with heavy usage, the device easily lasted me a full day with an average SOT of about 5.5 hours. Moreover, the Dash Charging technology will change the way you charge your smartphone. Ever since I bought the OnePlus 3 or now for the 3T, I have never charged my device overnight. OnePlus claims that with Dash Charge one can reach up to 60% of battery level in just over 20 minutes.

Now for the audio, this is where OnePlus seems to have done some cost cutting. The single bottom firing speaker though gets quite loud but the quality of the music pouring out of it is just not up to the mark. Things do turn a bit better when headphones are plugged in but overall, the device apparently suffers in this department. For audiophiles, this might be a deal breaker.

OnePlus 3T is easily the best smartphone of 2016 when we consider 'Value for Money' proposition. Else, it would still make the top five along with the OnePlus 3. If your budget is around Rs 30,000, this is the best piece of hardware and software from OnePlus so far. However, if you own a OnePlus 3, it is not necessary for you to upgrade to OnePlus 3T. There are some devices in this price range but no one comes even close to what the 3 and the 3T has to offer.