Here’s our review of the Mivi ThunderBeats 2, and the Conquer X Bluetooth Neckband earphones that cost Rs 999. 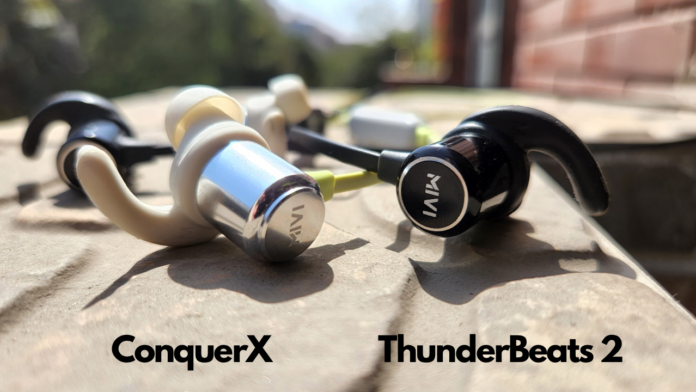 Mivi is one of the most popular homegrown brands in the country and has also given a number of value for money products to the Indian consumers in the past. In a bid to do the same once again, it recently introduced two new neckband bluetooth earphones, namely the Mivi ThunderBeats 2 and ConquerX. Both of them have an identical price tag of Rs 999 and are very similar in terms of specs and design. So let’s take a look at what they offer for the buck.

The Mivi ThunderBeats 2 and the ConquerX are very similar, infact almost identical in terms of design. Both of them have a single wire that goes around your neck with the earbuds at both ends of the wire. The earbuds have wing tips for a snug fit inside the ear, however, they just reduce the comfort of wearing the earbuds.

Because of the wing tips, they were very uncomfortable as it began to hurt my ear after a while. Mivi does supply extra pair of wing tips in two more sizes but none of them were comfortable. Both the earphones have magnetic earbuds but the magnets are not very strong. Further, there’s no feature where it can turn on or off on the basis of attaching or detaching the earbuds.

The length of the wire is long enough and you get button controls on both ThunderBeats 2 and ConquerX. This is where the design of both of these differ because the buttons look different on both of them.

You can control the volume, play/pause tracks, forward or rewind a track and even accept or reject calls with the buttons. Unfortunately, the buttons on both Mivi ThunderBeats 2 and ConquerX are very hard to press and aren’t very easy to use either when you are wearing the earphones. There’s also an LED light and a mic alongside the controls.

You can charge the earbuds using a Micro USB cable supplied with the earphones. This is also disappointing considering most of the products have moved to USB-C for charging and its clearly showing the cost cutting Mivi has done. On the better side, the earbuds are IPX4 rated against water splashes and sweat.

Both the earphones have a 10mm driver on which the audio relies. Further, both the Mivi ThunderBeats 2 and the ConquerX have Bluetooth 5.0 because of which they have a 10 metre operational range. As for the audio quality, the sound signature leans more towards the bassier side because of which the sound gets slightly muffled. Moreover, the lyrics are not as clear as the lows and mids are more focused upon. If you can tune the equalizer in your smartphone to your choice, you may be able to get a sound output of your choice.

Coming to the call quality, there’s a single mic alongside the buttons which is poor in performance. My voice to the other end was muffled and very low in volume. Background noise was quite suppressed but there’s no point to that if my own voice was suppressed as well. The situation was the same on both the ConquerX as well as the ThunderBeats 2.

The battery life was on the better side as Mivi promises 14 hours of playback time for both the earphones. We were easily able to get 10 hours of music playback with certain intervals in between. Considering the price, the battery seems to be great and one of the few features that stand in favour of the earphones.

Load more
The Mivi ThunderBeats 2 and the Conquer X neckband bluetooth earphones are highly similar in terms of design and specifications. At Rs 999, you can get better options from BoAt and Noise which are much more comfortable to wear, which is also one of the reasons we would recommend you to skip these.Mivi ThunderBeats 2, ConquerX Bluetooth Neckbands Review