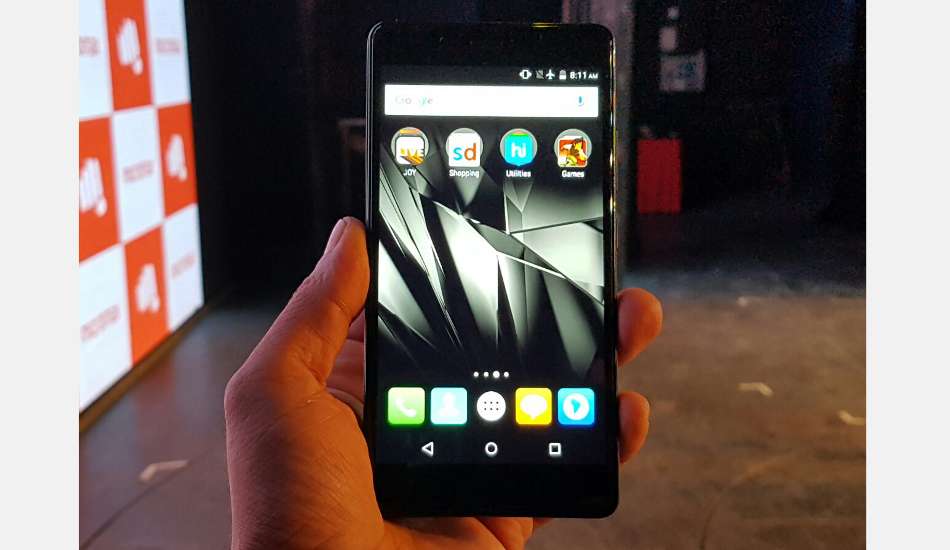 Surprisingly, it doesn’t have fingerprint sensor which is becoming a common feature in its competitors.

I used the phone for two weeks and here is my experience with the Micromax Canvas 6 Pro.

I have always preferred plastic phones as those are the most comfortable ones compared to metal phones which are often slippery. Ofcourse, plastic phones are light and can be made slimmer. All these properties are there in the Canvas 6 Pro.

With velvety smooth back panel, curved sides and compact design (despite having been a 5.5-inch device), the Micromax Canvas 6 Pro is quite easy to hold and operate.

The removable plastic back panel though doesn’t inspire confidence; open it roughly and you might break it. The quality of plastic power and volume keys also felt quite delicate. The rear camera unit lens is slightly raised and you should thus be very careful while using the phone as one of my personal phone’s lens that was raised got badly scratched due to casual handling and led to ruining camera capabilities.

The Micromax Canvas 6 Pro has a 3000 mAh battery. Before I pronounce any verdict, let’s first hear my case. One day, I started the day with about full charge and after 12 hours I had 16 percent juice left in the phone and as you can see in the screenshot half of the battery charge was taken by the phone in idle condition. While the screen consumed one-fifth of charge. Here I would like to remind you that I kept the brightness more than half which is why there was so much consumption. Games also consume a lot of energy about 10 per cent in half an hour. Cell standby caused just 1 percent charge which means even if I had dual SIM in the system not much would have been accounted for that.

I wasn’t blown away by the results but to be quite honest, it isn’t that bad. It means with medium brightness and if could switch off internet when not needed, you could easily sail through the day with just one recharge.

The Micromax Canvas 6 Pro has a 13-megapixel rear camera and a 5-megapixel front camera. Both the cameras are quite decent in terms of resolution, sharpness and colour recapturing ability. However, there are some issues with the rear camera when it comes to touch focus. It doesn’t really capture the closer objects despite being manually focused on to the same. For instance, check the picture below where it focused on the background and not on the peacock figurine despite my repetitive attempts.

As expected, the Micromax Canvas 6 Pro was quite fast and offered a smooth performance with its 4 GB RAM and octa-core processor. Its display has full high definition (1920×1080 pixels) resolution which is quite good in the sub-Rs 15,000 segment. The touch response of the display was quite good as well. The 5.5-inch screen also offers just enough brightness for outdoors. However, I wasn’t impressed with its auto brightness which tends to decrease the brightness a bit than necessary.

Micromax surprisingly comes with Android 5.1 Lollipop operating system. Being a new device it should have the new Android 6.0 Marshmallow OS. The smartphone has also the Around services that allows booking cabs, hotels, order food etc. Well, it is an additional service but the phone also comes with some not-so-necessary apps.

For instance, the Canvas 6 Pro has Monster Truck and Temple Paradise games. However, these are not full-fledged games but these are trial games. But why Micromax decided to offer a trial game in a device costing Rs 13,999? Micromax either should have offered a full-fledged game or nothing at all. Thankfully these are removable.

There are two microphones in the Canvas 6 Pro which does a decent job in noise cancellation. I was quite satisfied with its calling ability. WiFi and Bluetooth connectivity are fine too. There is a 3.5 mm jack and FM radio as well.

So is Micromax Canvas 6 Pro worth Rs 13,999? Its answer lies what you are looking in the phone. If you are comfortable with plastic phones, without fingerprint sensor, then yes, you should consider this phone. Micromax meanwhile should act fast and release the Android 6.0 Marshmallow OS for the phone, else it will lose the edge against its competitors very soon.