Lava Iris X1 Review: It has looks to impress 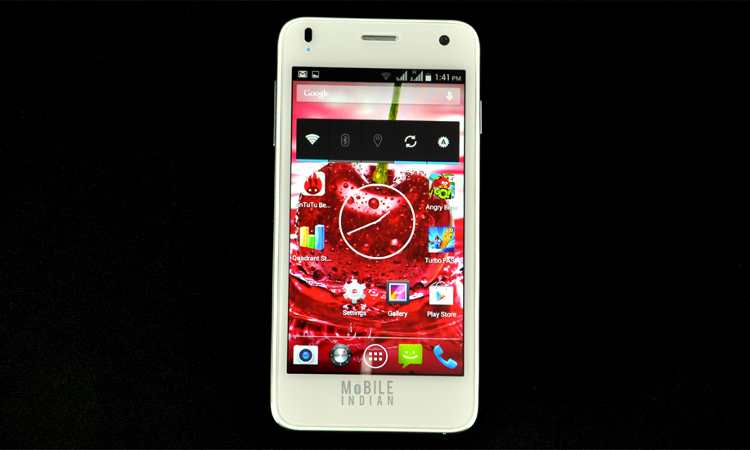 Lava Iris X1 looks great on paper with Android KitKat and quad core processor. Here is an analysis of its performance in real life.

No gyro sensor so racing games aren't playable on this phone

Lava Iris X1 is the first phone of the Indian handset maker with Android KitKat. It is also among few low-cost handsets that come with the latest Android KitKat version. It is up against the Motorola Moto E, Micromax Canvas Engage, Micromax Canvas Unite 2, and Micrmax Canvas A105. Note that it is costlier then both Moto E and the Canvas Unite 2 which we reviewed recently and it managed to impress us with its design and performance. Now here is a detailed review of the Lava Iris X1 which is retailing at the time of writing for Rs 7,999. 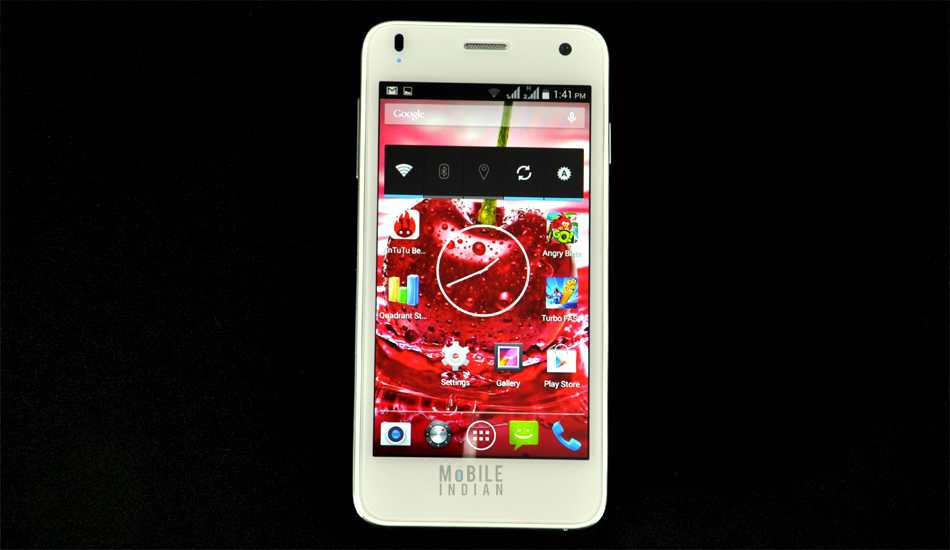 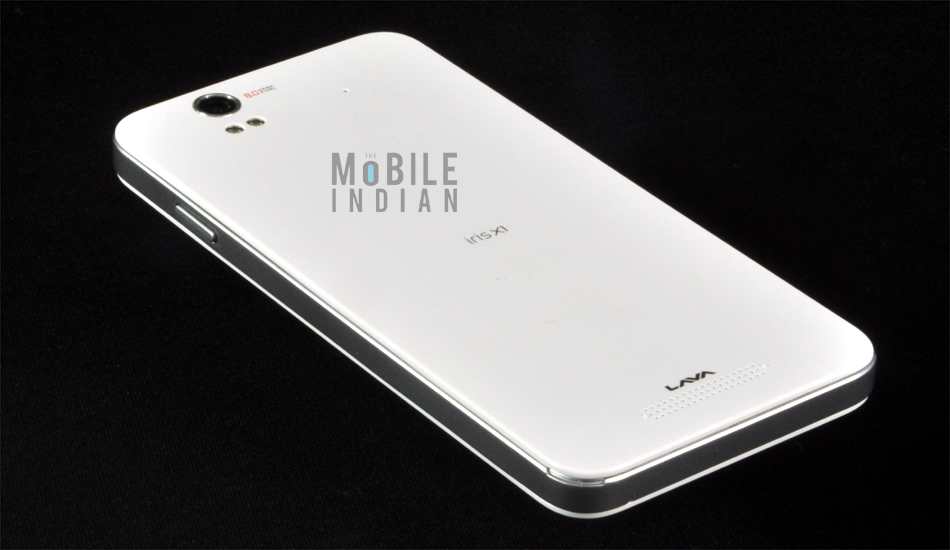 The phone comes with a pair of earphones, a charging cable, a battery, and a flip cover.

Lava Iris X1 resembles Apple’s iPhone 4/5 and looks quite rich. The handset has a thick metal strip on its four sides which enhances its looks while giving a solid grip. It also gives a feeling that the phone can withstand few drops. 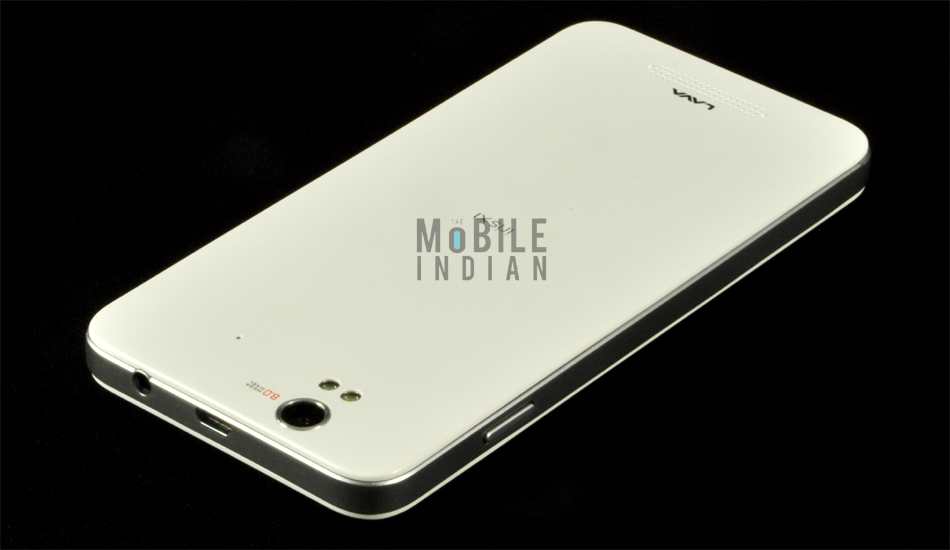 Though plastic, the Iris X1’s back panel has a smooth feeling. Even the flip cover has the same rubberised feel. There are two LED lights below the rear camera unit in the back panel which also harbours a pretty visible speaker grill. The volume rocker and the power button – which lies in the left and right hand sides respectively – are made of metal and thus gives a feeling that they are made to last. At the top lies the micro USB and the audio ports.

All in all, Lava Iris X1 is a pretty good looking phone, and can be termed as one of the best at this point of time.

The Lava Iris X1 has a 4.5 inch touchscreen. This IPS LCD display has 480×854 pixels resolution which means it has decent 217 pixel density, considering HD resolution for even 5 inch devices in the under Rs 10,000 segment is quite rare. Lava has also wisely armed it with few good wallpapers that look quite good on the phone, creating an illusion that it has an HD display. 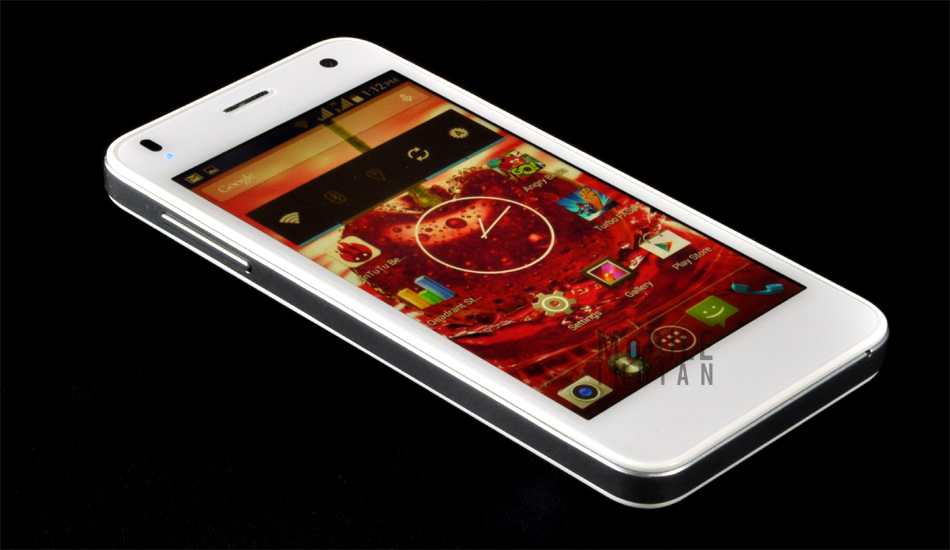 The touchscreen has good viewing angles, so you need not to keep the phone straight in front of your eye to see the contents. It particularly come handy while playing games and reading text as in these times one tend to tilt the phone frequently in odd angles. The response of the screen is also quite decent. 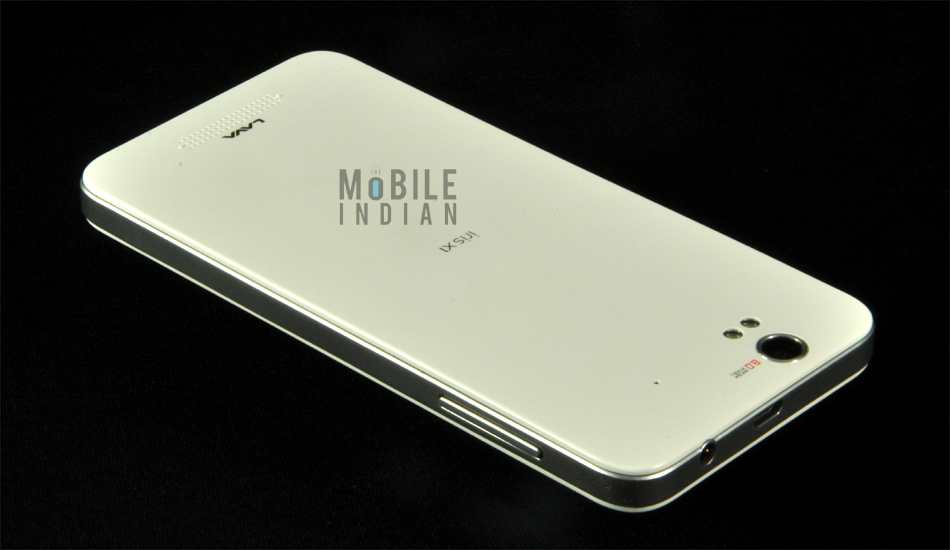 However, Irix X1’s display does not have Gorilla Glass coating as its chief rival, the Moto E, and thus you have to use a screen protector, else the screen would get ruined by a lot of scratches in the course of day to day usage.

Considering the figures, we had a lot of expectations from Iris X1. Also since we had reviewed the Unite 2 in recent past, we were in a good position to compare the camera quality of Iris X1 with that of the former. 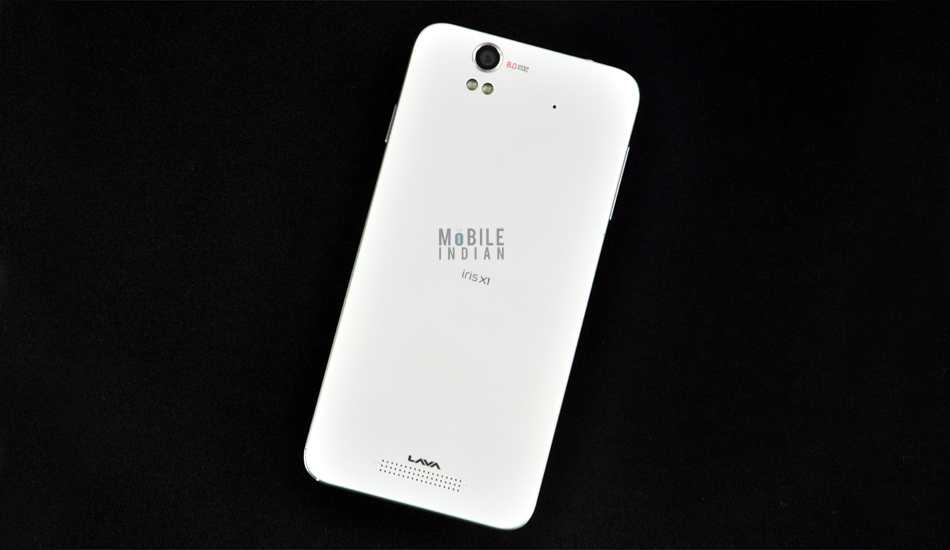 The Iris X1 did manage to capture colours nicely. The higher resolution (as compared to Unite 2 and Mote E) comes to the rescue of Iris X1; you can crop pictures to highlight the objects you want. Though the rear camera does take time to focus but once it does, it manages to show what it is supposed to. The front camera is both good for video calls as well as self-portraits. 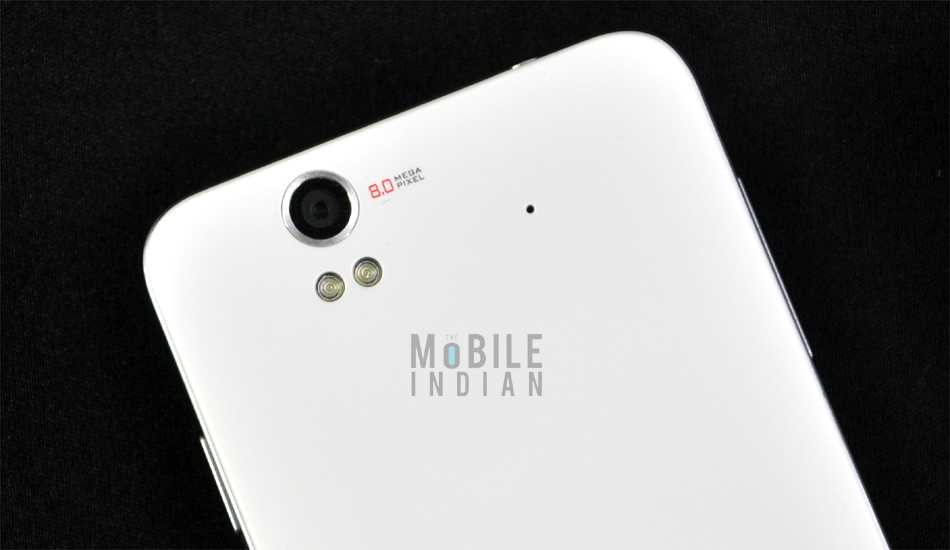 We haven’t had a chance to review the Motorola Moto E but the Iris X1 is surely a good camera phone in the sub-Rs 10,000 segment.

The Lava Iris X1 comes armed with 1 GB RAM that helps run the Broadcom BCM23550 quad core processor which has a clock speed of 1.2 GHz. Remember this is the processor was also used in Xolo Q1000 Opus which was hammered by most for its poor performance. But Xolo Opus had Android Jelly Bean then and after KitKat update it is expected to offer better performance. So we had much expectations from the Iris X1.

Our expectations further rose as the Iris X1 managed to get good scores on benchmarking tools – 13604 on Antutu, 3269 on Quadrant Standard. 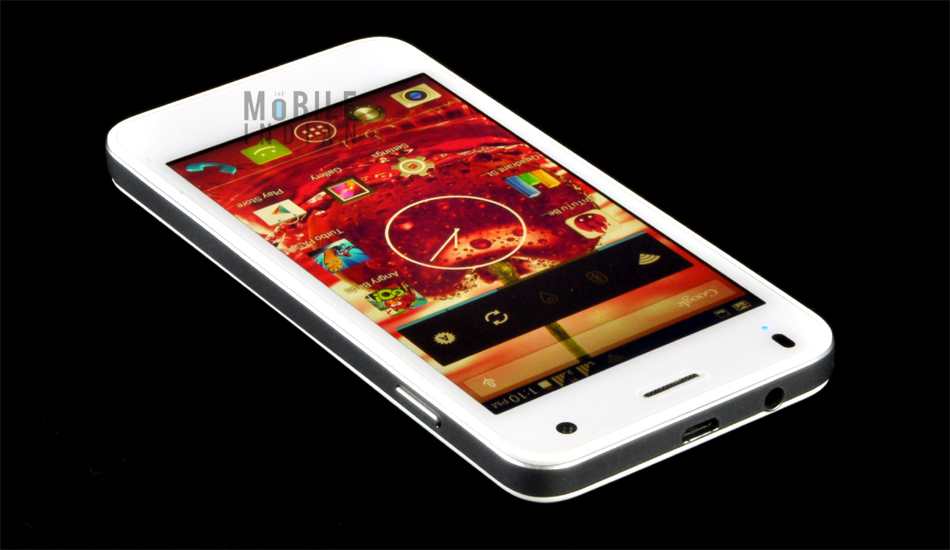 As expected, the Iris X1 managed to run mid-end games like Temple Run 2 and Dead Trigger (in low graphics) with ease. However, absence of G sensor curtails its ability to run racing games that depends on the orientation of the phone. You thus have to use manual controls to play racing games but some games like Angry Birds Go just cannot be played on this phone. 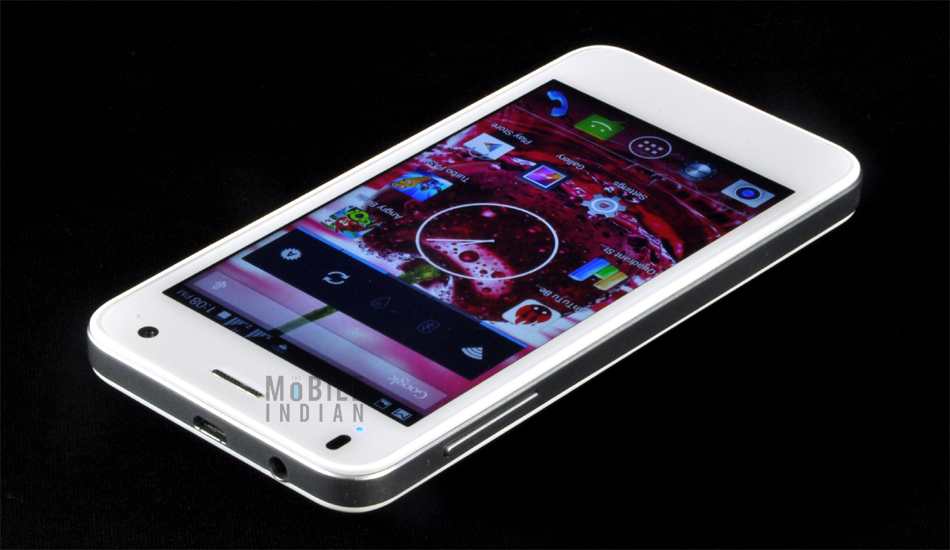 When it comes to battery life, the Iris X1 can best be termed as average though it has a pretty big 1800 mAh Li-Ion battery. Even with medium usage, it does not last a full day. So if you are a medium to heavy user, better keep a charger or power bank handy.

The Lava Iris X1 has two SIM slots one of which is of regular size and is meant for 3G connectivity. The micro SIM slot allows 2G connectivity only. We have used two SIM cards and never it gave us any call drop. During calling, it managed to offer a clear sound but the ringing volume was not upto the mark. 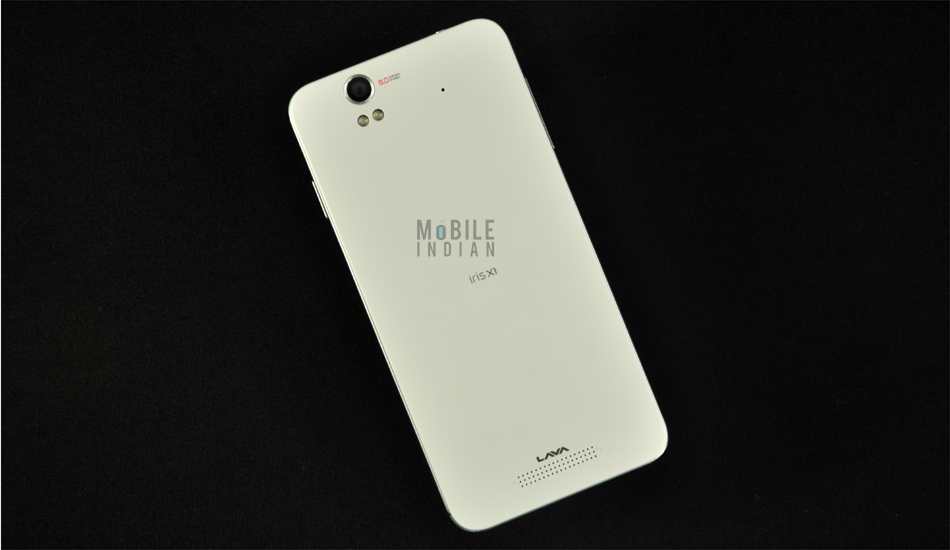 However, I had no problem whatsoever when it came to WiFi browsing, Bluetooth or cellular data connectivity. There is a micro USB port in the Iris X1 as well using which you could transfer files to and from the computer. 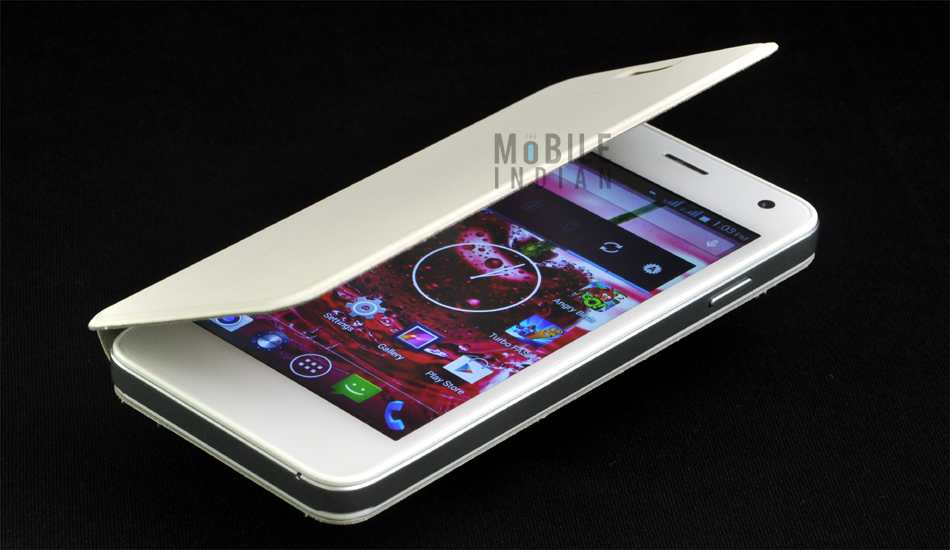 The Lava Iris X1 has 4 GB of internal storage of which about 2.2 GB is available for storage. There is an expandable storage slot too that can accommodate a micro SD card of up to 32 GB – you will find this exact combination in almost all smartphones under Rs 10,000.

Lava Iris X1, in terms of design and look, is definitely a worthy contender of Mote E and Micromax Canvas Unite 2. It also offers a decent performance and two good cameras (front and rear). However, it does not have Gorilla Glass protection like the Moto E nor does it offers a great battery life.