It has a premium look and feel but does it perform well?

Since the launch of Gionee Dream D1, in the month of March this year the company has launched quite a few exciting android smartphones in India. The Elife series, which caters to the high end, has added a new member to the family, called Gionee Elife E5. Elife E5 has a premium look and feel while it offers a superior set of hardware specifications as well. But what does the device have to show in terms of performance and real life utility? Let’s find out.

We all saw the Gionee Elife E3. Now the Gionee Elife E5 is even slimmer and better looking with a unibody design and single SIM connectivity. The device looks good and the white color option we got for review is quite grand. It has a 6.85 mm slim body that surely makes it an object of desire and users can flaunt it all day long without hurting their hands. 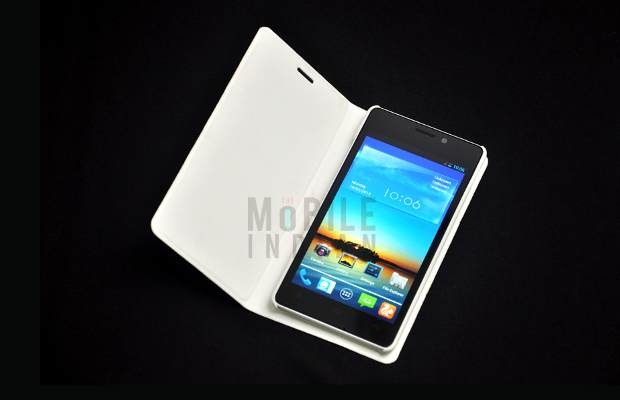 The Elife E5 has a flush front thanks to its feather touch keys. The back panel of the device has a matte finish that continues along its sides as well. The sideways placement of the power/standby key makes it easy to use. All the keys have been placed on the left side of the device making it a little tough for right-handed users, but it only takes a little getting used to to overcome that. The top of the device features an audio connector that makes playing music or connecting to a headset easy as compared to the sideways placement of the audio connector. The right side houses a SIM slot and USB.

Overall, the build quality of the device is good. It’s lightweight and the company has also given a complementary leather bookstand cover with the device that adds another layer of protection to it. The device has a premium appeal and a super slim design that will definitely be liked by buyers.

The Gionee Elife E5 is powered by a 4.8 inch HD 720p display built using Amoled (Active Matrix Organic LED) technology. Although the display does not feature One Glass solution, the quality and color reproduction is comparable to that of displays featuring OGS. 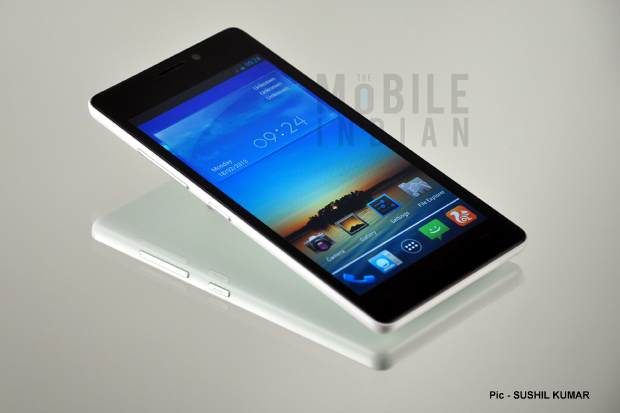 The display has good contrast as well as good color vibrancy, which makes it fun for watching videos, images, games and so on. 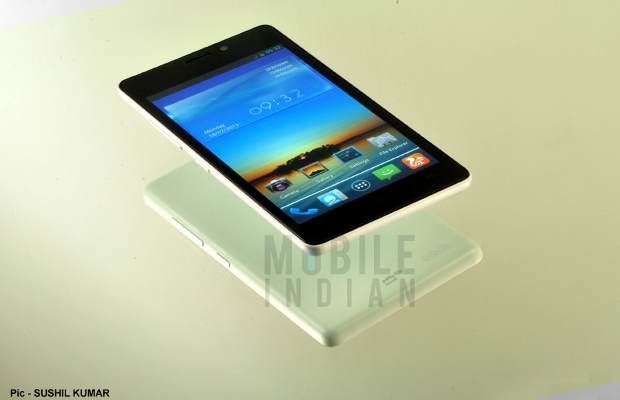 The resolution supported by the device is 1280 x 720 pixel at 4.8 inches, making it great for viewing HD movies as well as for playing HD games. The display has a high pixel density that makes visuals look great with no pixilation at all. The color reproduction and black levels are good and the picture quality offered by the display is sharp and vibrant.

The Gionee Elife E5 has a Mediatek MT6589T chipset that includes a 1.5 GHz quad core processor along with a PowerVR SGX 544MP graphic processor. The hardware is the turbo processor version of the older chipset that offers better performance. The added muscle is clearly visible in each and every task that the device does and it adds a lot of fluidity to the user interface. 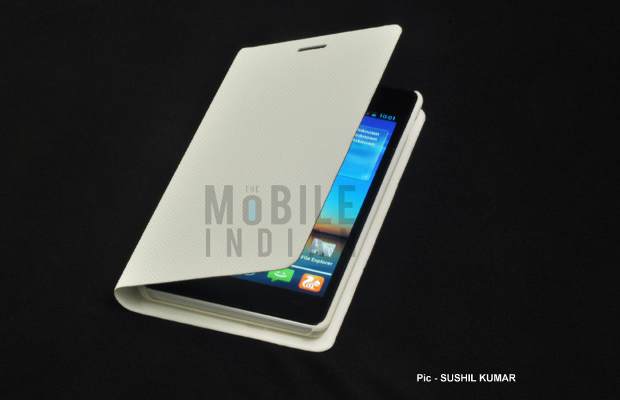 The Gionee Elife E5 features 1 GB of RAM memory and 16 GB of internal storage. This is the good part but sadly the device misses out on a memory card slot, which has been sacrificed to make it as slim as it is. Although the 16 GB storage of the device is not less, compared to device storage going as high as 128 GB nowadays 16 GB surely sounds small. 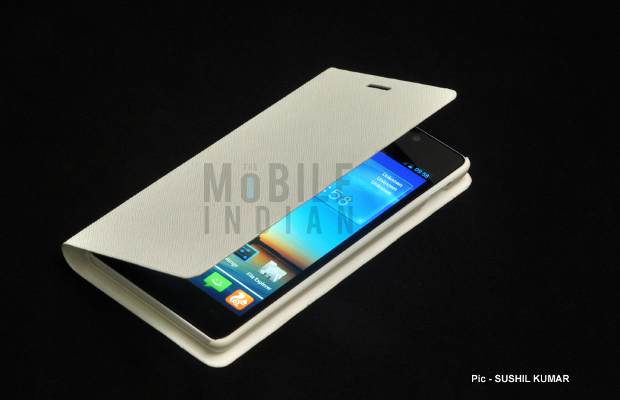 There is ample room for applications and multitasking with a 1 GB RAM and quad core processor. Overall the device feels good and zippy at all times even when applications are running in the background.

The Elife E5 underwent a lot of application testing, installations, uninstalls and stressing for this review, but it never hung or froze. In terms of performance benchmarking on the Antutu benchmark the Gionee Elife E5 scored 16439 marks putting it at the heels of Google Nexus 7, which is a quad core device; and above the older HTC One X android smartphone with a quad core Nvidia Tegra processor. To be doubly sure we tested the device with Qualcomm’s Vellamo benchmark as well and it too showed similar results, with the device scoring 555 points in Velammo’s metal or hardware test and 1646 points in the HTML 5 test. 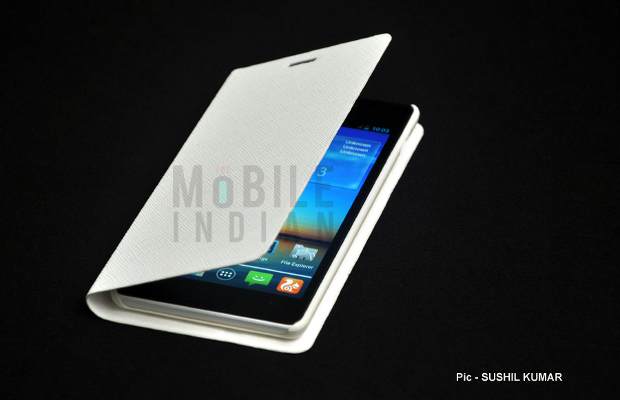 The call performance of this device is good too and calls are received and made without any issue. The earpiece and loudspeaker volume is abundant and the microphone is also loud and clear. In such slim devices the loudspeaker is usually weak, but on the Gionee Elife E5 it is powerful and does full justice to sounds. 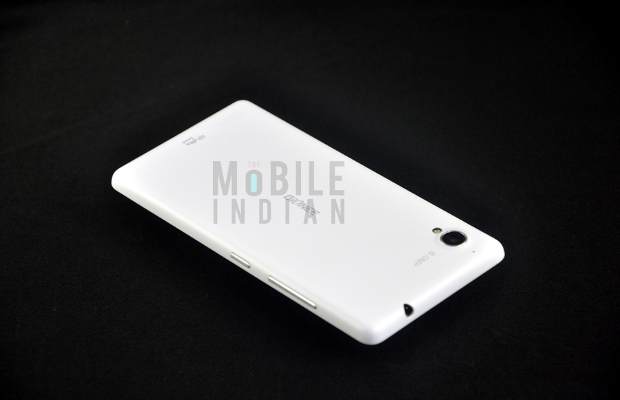 The 4.8 inch display is a major plus point of this device. Even its touch sensitivity is very accurate.

The Elife E5 comes with Google Android Jelly Bean 4.2 operating system with a custom interface, which is Gionee’s proprietary interface and is very intuitive as well. The number of home screens can be increased or reduced to accommodate more stuff. Even the lock screens get a multi windows interface that offers quick access to apps and utilities and it can be customized easily as well. 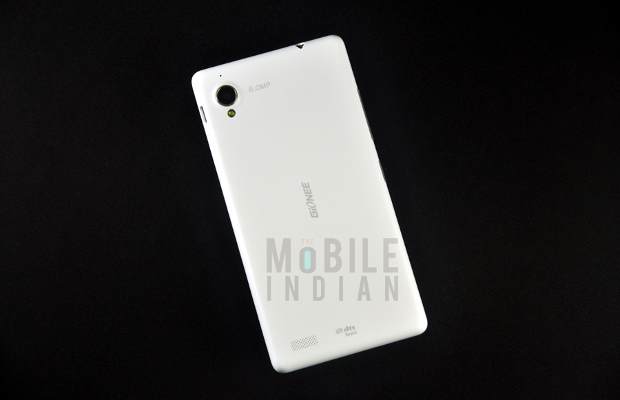 The overall experience of the device is good and the company will roll out upgrades in future. The device features OTA Over the Air upgrade system, which makes the delivery of updates faster.

Gionee Elife E5 comes with an 8 megapixel camera at the back that offers great variance in colors and full HD 1080p video recording as well at 30 frames/sec. The auto focus mechanism however is marginally slower and that might be a hindrance in quick image captures resulting in blurry images, especially when the shutter speed is increased. Overall, the camera is nice, plus the lock screen window dedicated to the camera can be used for lightning fast image captures. 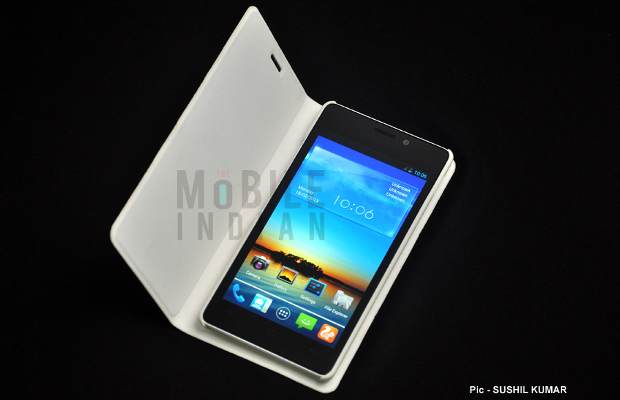 The image quality of the camera is good in both the outdoor and the indoor modes. The LED flash comes in handy wherever illumination is needed but it is only effective for very close objects. The front camera is a 5 megapixel fixed focus one. The fixed focus limits usage but to keep the slimness, designers had to make sacrifices and yet there are no complaints with the fixed focus camera as it does a good job. 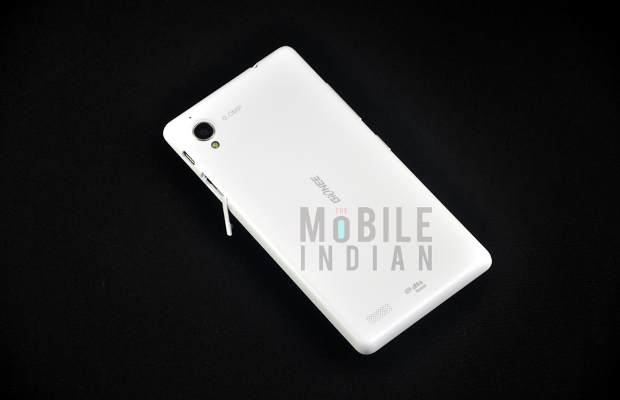 On the multimedia front this device features support for all generic android formats, plus like on any android device there’s a plethora of applications available at the android marketplace. There is also stereo FM, which supports high definition recording and automatic signal boost feature for low signal areas.

The device manages power quite sensibly and offers better battery backup. Plus, the DU battery saver application has been pre loaded on the device, making battery life improvements essential. The 2000 mAh battery pack cannot be called small and the designers have done a brilliant job keeping it inside a slim device that measures only 6.85 mm. The device manages a good 1 to 1.5 days of nominal usage with balanced calling, gaming and multimedia, while too much gaming drains the battery within 4 hours flat.

With a price of Rs 20,999 the device has features and functionality in a slim profile that is unparalleled to what brands like Samsung, LG, Sony and even HTC offer. But yet again the problem would be the newness of the brand and lack of retail availability of devices. The Gionee Elife E5 flaunts a superb design, and great hardware and software, but the brand seriously needs to create some on ground presence in the market. 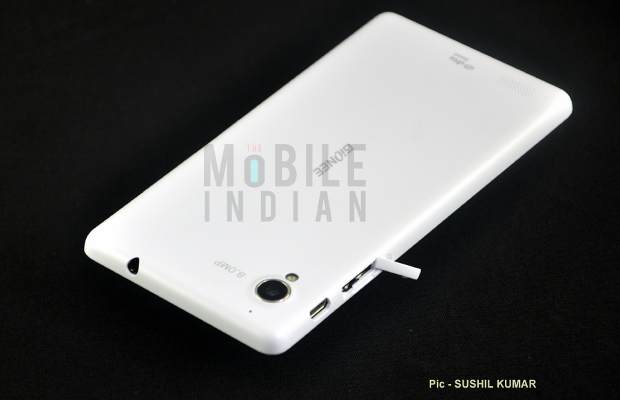 With a device like E5 Gionee will be in competition with brands like Micromax that have been in the Indian market for quite some time now.