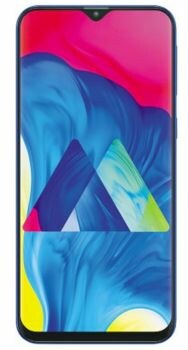 The Samsung Galaxy M10 comes with a 6.2-inch Infinity-V display with a waterdrop-like notch. It is powered by Samsung’s Exynos 7872 processor which utilises two A73 cores and four A53 cores in addition to a new GPU. The device comes with 3GB RAM and 32GB storage, which can be expanded up to 512GB via microSD card. The device runs on Android 8.1 Oreo operating system and is backed up by a 3400mAh battery.

The Galaxy M10 comes equipped with dual rear camera setup, wherein it has a 13MP primary sensor, as well as a secondary 5MP lens. It also has a 5MP snapper on the front, which houses features like AR Emoji, Stamp, Filters, and AR Stickers. The smartphone supports face unlock feature. The connectivity options include 4G/LTE, Bluetooth, WiFi, A-GPS, GLONASS and a micro USB port. It measures 156.4×74.5×8.8mm and weighs 160 grams.