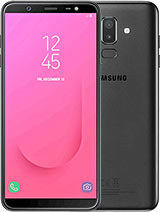 The Samsung Galaxy J8 feature 6-inch HD+ Super AMOLED display with a resolution of 1480 x 720 pixels and will run on a Qualcomm Snapdragon 450 SoC with 4GB of RAM and 64GB of internal storage. The device will come installed with a dual (16MP f/1.7 aperture + 5MP f/1.9 aperture) rear cameras for capturing the depth of field pictures and a 16-megapixel sensor on the front for selfies. Although unclear, the Galaxy J8 appears to feature a more metallic textured finish compared to its cheaper Galaxy counterpart. The device will equip a larger 3,500mAh battery which is estimated to last you a day on moderate use.