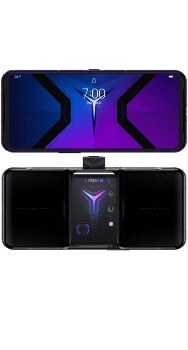 The Lenovo Legion 2 Duel sports a 6.92-inch Samsung E4 AMOLED display that has a 20.5:9 aspect ratio, a 2460 x 1080 resolution, 1300-nits of peak brightness, a 144Hz refresh rate, a 720Hz touch response rate, and a 3.8ms response time. The display supports 8-bit HDR display with a Pixelworks i6 chipset. There is Gorilla Glass 5 Protection present as well.

The smartphone is powered by the Snapdragon 888 SoC paired with up to a whopping 18GB of LPDDR5 RAM and 512GB of UFS 3.1 storage. For the optics, the Legion Phone 2 Pro has a dual camera setup consisting of an OmniVision 64MP f/1.9 1.0 µm primary sensor paired with a 16MP f/2.2 123° ultrawide angle camera. There is a 44MP front-facing shooter that is pop-up sliding out from the right side of the phone.

The Legion 2 Duel is backed by a 5,500mAh battery split into two cells of 2750mAh each. The splitting of two batteries allowed Lenovo to put in 90W fast charging support and through two USB-C ports.

The phone has a twin-turbo fan active cooling system built into it. One is an intake fan with 29 blades and a 12,500 RPM while the other is an output fan that pushes out the hot air. It too has 29 blades but its RPM is higher at 15,000. Lenovo says that the fans have a noise level of 24.7dB and a life of up to 50,000 hours which converts to almost 6 years. Lenovo has also included a vapor chamber with liquid cooling for passive cooling. The phone also has four ultrasonic shoulder keys, dual force touch sensors, and dual capacitance keys.

The dual front-facing magnet speakers are tuned by Dolby with Atmos support which also has a smart amplifier. For connectivity, you get Wi-Fi 6, one USB-C 3.1 port for charging and DisplayPort support, 1 USB-C for power in, Bluetooth 5.2, NFC, and 5G.