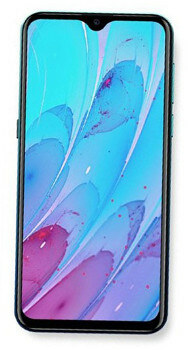 Lava Z93 Plus smartphone is listed in Black and Gold colours. It features a 6.53-inch HD+ waterdrop display with a screen resolution of 1560 x 720 pixels. The phone is powered by a 2.0GHz octa core-core processor along with 2GB/3GB of RAM and 32GB of internal storage, which can be further expanded up to 512GB via micro SD card slot.