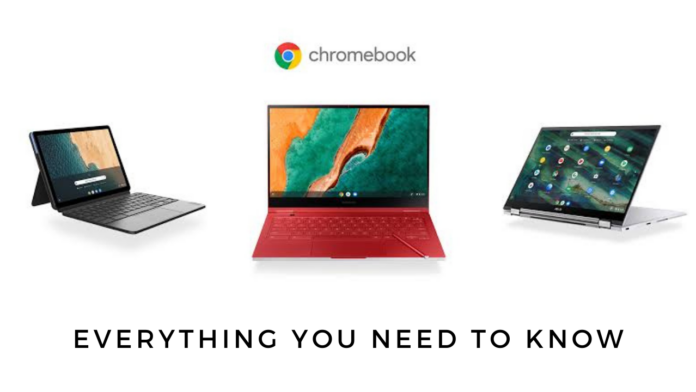 The pandemic hit us, and the world had to go from physical to virtual overnight. Everything we did – like going to the office, shopping or going to school – had to shift online, which obviously increased our dependency on technology. This meant more laptops and smartphones were needed than ever before for the world to function the way it used to. But not everyone has the need or means to buy a powerful notebook in these uncertain times, which is the biggest reason why Chromebooks are important and are making a strong comeback in India.

Chromebooks have been around for a while but the buzz around them has recently picked up again, as people look for speedy, efficient and yet affordable notebooks.

But a lot of people still do not know what Chromebooks actually are, how they work and what makes them special as well as what they can – and can not – do. So if you are one of those considering a Chromebook but need to know more or have questions about them, there is our attempt to answer some of the most frequently asked queries (FAQ) about these very different notebooks:

1
What is a Chromebook? How is it different from a ‘normal’ Windows Notebook?

2
How much does a Chromebook cost?

Chromebooks are basically lighter, uncomplicated, cloud-oriented and often faster versions of a notebook. As they do not require heavy resources and high end processors to run, they are often available at surprisingly affordable prices. You can get a decent Chromebook for as little as Rs 20,000 today. Prices go up as hardware improves – Chromebook with full HD displays and Intel Core i3 and i5 chips and more storage will come with higher price tags. But the big thing to keep in mind is that a Rs 20,000 Chromebook will run way more smoothly than a budget Windows notebook of the same price in most cases.

3
Chromebook run on Chrome OS, but what is Chrome OS?

Just like a “normal” laptop runs on Windows or a MacBook Air or MacBook Pro runs on MacOS, Chromebooks also have their own operating system called Chrome OS, which makes them unique. A Google product, ChromeOS, is based on Google’s browser Chrome. It is an OS that is based on an “Internet first” principle. This means most of the primary tasks performed on a Chromebook are done online.

4
Is Chrome OS VERY different from Windows or MacOS? Will I need time to learn it?

ChromeOS is actually the easiest of all OSes to learn. As it is based on the Chrome browser, anyone who has used Chrome to browse the Internet will be able to use it. There is literally no learning curve. Using a Chromebook is fairly simple. For best results you need a steady Internet connection and a Google account to work on a Chromebook.

5
I hear Chromebooks have very low end processors. Does this mean they are not very powerful?

Most Chromebooks do tend to run on Celeron and lower-end processors. But that is because Chrome OS does not require a lot of resources. It does not mean that the Chromebook is not as functional as a Windows notebooks – most Chromebooks actually boot up and shut down faster than Windows notebooks and generally have better battery lives. And well, if you like specs, you can get Chromebooks powered by Intel Core i3, Core i5 and Core i7 chips. Mind you, with those chips, we would recommend using Windows – as Windows is designed to handle them!

Most Chromebooks tend to come with lower storage than conventional notebooks. But the important thing to remember here is that Chrome OS is a low resource OS and also supports online storage, so actually you are unlikely to need too much storage. In fact, when you buy a Chromebook you get a 100 GB cloud storage for free along with it. As most of the documents and content you create can be stored on cloud the need for offline storage is not much. Plus you can also buy more cloud storage if needed.

7
How much RAM does a Chromebook need? Most seem to have just 4 GB RAM…

As we have pointed out, a Chromebook runs on Chrome OS, which does not need the kind of resources that a Windows or a MacOS device does. So 4 GB RAM is more than enough for a Chromebook to run smoothly and even multi-task. Of course, the more RAM you can get the better it is, but 4 GB will suffice, more often than not!

8
Can I connect a flash drive or a portable hard drive to a Chromebook? Do Chromebooks come with ports like normal notebooks?

Yes, most Chromebook come with “normal” ports like USB and even USB Type C. Mind you, that depends on the manufacturer. Many Chromebooks even support HDMI connectivity, and have card readers. Yes, you can connect a portable external hard drive or flash drive to it. Just check for ports and connectors before you make your purchase – just as you would on a normal notebook.

9
Can I get a Chromebook with/without a touchscreen? Or one that revolves 360 degrees? Or maybe one with a detachable keyboard?

Yes, you can. Just like with other notebooks, different manufacturers produce different kinds of Chromebooks which is why you get a variety of Chromebooks in the market. Some Chromebooks are like your basic laptops while some come with touch screens. You can get Chromebooks with detachable keyboards, which revolve 360 degree around the keyboard and can be used as a tablet and so on. You can browse the market and choose the one that fits your cause.

10
Can I use a Chromebook without the Internet?

11
Is a Google account necessary to use a Chromebook?

Well, you can use a Chromebook with a guest login too. So classically speaking, you can use it without a Google account but usage would be very limited, and you would not be able to download apps or log in to services like Google Drive and Google Docs. So we would recommend getting a Google account – it costs nothing.

12
Is a Chromebook safe?

This is one of the biggest differences between a Chromebook and laptop, and a major plus point of a Chromebook. Laptops (especially Windows ones) often need third party virus protection whereas every Chromebook comes with built in virus protection that protects your device from malware. Chromebooks also come with a security chip that keeps your data encrypted. The ChromeOS also does what it calls sandboxing which means it keeps different softwares separately on your device, this essentially keeps the rest of your Chromebook safe, even if a part of your Chromebook gets infected.

13
Can I use Microsoft Office on a Chromebook?

Up until recently, Chromebook users could download and use Microsoft Office on a Chromebook by downloading the Android version of Microsoft Office. However, Microsoft recently announced that the company is discontinuing support for Office apps on Chromebooks from September 18, 2021 onwards.

14
Can I access, edit and create MS Word, Excel and Powerpoint files on a Chromebook?

15
Can I run different programs and apps on a Chromebook?

Yes, you can run Programs and apps on a Chromebook. Chrome has its own dedicated app store, although most of the apps there are design to run on the Internet (you would need an Internet connection to use them). You can also download Android apps on your Chromebook and run them just like you would on an Android smartphone.

16
Chromebooks run Android apps, I hear. Do they run exactly as they do on Android phones?

To a large extent, yes, they do. However, there are differences. A big factor to keep in mind is that all Android apps are designed for touchscreens and not all Chromebook have touchscreens. Also Chromebook have different display resolutions as compared to phone displays, so some apps might look and behave a little differently. Let’s face it, Android apps do not even run perfectly on Android tablets. So you will not get a perfect Android app experience on your Chromebook, but it will be more than good enough for most users.

Yes, you can play casual games quite easily on a Chromebook – as we pointed out earlier, most Android apps run on a Chromebook. However if you are looking at playing higher end games (PUBG, Call of Duty), we would advise going for a Chromebook with faster processors (a Core i3/i5). Chromebooks are not really designed for gaming (hardly any come with good graphics cards), so do not consider one as a gaming notebook!

18
Can I edit videos and photos and run Photoshop on a Chromebook?

19
Can I connect my phone to my Chromebook?

20
How is the battery life of a Chromebook?

Because it runs on such light software and does not require heavy duty specs to run extreme functions, the battery life on a Chromebook usually lasts longer than an average notebook. Even low-end Chromebooks that cost less than Rs 20,000 are known to have battery life that comfortable goes past ten hours on a single charge.

21
Can multiple users a Chromebook, without sharing data?

Yes, they can. All they need to do is log in using their Google accounts.

22
What is the Everything button on a chromebook?

Every Chromebook comes with an Everything button or a Search button which allows you to find any file or document on the notebook swiftly. You can simply tap the button, type the name of your file or document and find it easily.

23
Do Chromebooks come with any virtual assistant?

Yes, Chromebooks come with Google Assistant which can be used by voice control, but to use this feature you need to have a running Internet connection.

24
How often does a Chromebook get updates?

One of the many benefits of a Chromebook is that it keeps getting regular updates. And unlike as on Android, there are no delays. This is because all Chromebooks regardless of what brand they come, from run on ChromeOS which gets direct updates from Google from time to time.

25
Should I buy a Chromebook?

Whether to buy a Chromebook or not completely depends on your use case. If you mostly use your notebook for writing, research, presentations, emails, YouTube, and browsing in general, a Chromebook would fit your use case perfectly. In many ways, it is the perfect low cost, high speed device that students and researchers and perhaps even journalists need. However, if you are looking for a notebook that can let you do heavy duty tasks like video editing and play games that require heavy graphics resources, then a Chromebook is not really for you.