Oppo has launched the Reno 7 in India and here’s our camera review of the smartphone. 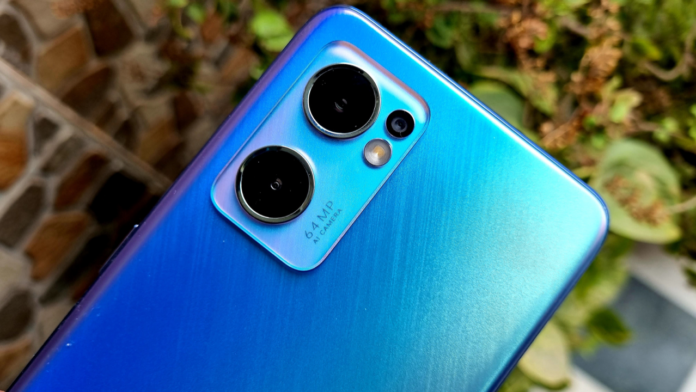 Oppo’ Reno 7 has landed in India and we like how it performs overall so far. However, what remains to be tested is the camera setup at the back and at the front of the Reno 7, as Oppo’s key focus with these phones is photography. The device gets a 64MP f/1.7 primary sensor, 8MP f/2.2 ultra-wide angle sensor, 2MP f/2.4 macro sensor. While on the front, there’s a 32MP selfie sensor inside a punch-hole.

Further, Oppo’s camera app carries a bunch of features such as an Expert Mode, Macro mode, dual-view video where you can shoot from the front and back camera simultaneously, time-lapse and even a text scanner. The app itself is easy to use with dedicated tabs for main modes such as photo, video, portrait and night. So lets dive in deep and find out where the camera stands against the competitors of the device.

The shots taken on the Oppo Reno 7 with its 64MP primary camera under outdoor conditions turn out to be decent. The colour saturation shows natural colours and the sharpness of the photo is high as well. There’s good dynamic range, however, things take a turn when you start zooming in on the photo. The sand below and the leaves start looking artificial with a weird oil-paint effect that doesn’t look nice.

As for videography, you can shoot 4K videos at up to 30fps and 1080p videos at up to 60fps. It also supports ultra-stable mode at 1080p 60fps for a more stable video shooting experience. You can also change the aperture and blur out the background in real time while shooting a video but only in 720p resolution video. There are various other filters and adjustments available as well.

For video quality, you can expect it to be average when shooting indoors as there’s a good amount of noise. Outdoors, the videos are again good in quality with natural colours and clear audio capture. However, you will notice the same effect when you zoom in which is a bummer.

The shots clicked with the 8MP wide-angle sensor which has a 120-degree FoV captures in a lot of the scene. The image does distort a bit at the edges but that isn’t very noticeable. The colours look very identical to the normal shots with decent sharpness until you zoom in and take a closer look. Again, the sharpness of the photo is lost with that very same oil-paint effect which we noticed with normal outdoor photos.

Under indoor conditions, the Reno 7 does average with faded out colours. The exposure looks fine but the image isn’t able to retain the natural colours of the subject. However, the photos look sharp and interestingly, the oil-paint effect has lowered down, but is still present if you look very closely. It basically depends on the subject and the lighting as to where you can notice that effect and where you can’t.

When capturing under low-lighting, the Reno 7 struggles to retain the detailing and again, the colours of the photo fade out. The photo doesn’t have a lot of noise but the lack of detailing and colours just adds up to the disappointment. However, if we took the photo with Night Mode turned ON, it did contribute in levelling up the details and sharpness.

The Oppo Reno 7 doesn’t have a dedicated telephoto sensor but makes use of the primary camera to click portrait shots. While these also lack punchy colours, sharpness and detailing, they have accurate edge detection. However, as you guessed, the oil-paint effect is still present and whenever you zoom in, it straightaway makes the photo look below average.

Fortunately, the 2MP Macro camera does click decent photos. The effect isn’t there and the details are retained. The colours also look fine and the camera is successfully able to identify the subject. However, we did face some issues when it comes to focus locking as it wasn’t able to focus instantly on the subject.

The selfies from the 32MP sensor on the front look very decent. They have accurate colours and a good level of detailing. The exposure levels were also well handled, however, the portrait shots just missed the subject. As you can see in the left photo (portrait shot), the edge detection isn’t accurate at all. It should have blurred out the leaves but instead, it blurred some of the leaves as well and a lot was left. In fact, these portraits look better than the one clicked with rear cameras.

For selfie videos, these were also great in quality. With bokeh effect at a 100%, the camera was surprisingly keeping the subject in focus and even the background was blurred out with no issues in edge detection.

The night mode on the Reno 7 camera works fine. Its neither very good nor it is bad. It bumps the contrast levels by a bit which makes the colours look vibrant. The noise level was also reduced compared to the shot with night mode off.

To conclude, the cameras on the Reno 7 are average. We expected it to be much better than how it has performed in our test. The rest of the phone including the display, software and design is well made about which we have talked in detail in our review.