If the players make too many mistakes, it results in lost balloons for the animated characters and the characters don't stay afloat when they lose their balloons.

Zynga, the mobile gaming company which came out with the popular word game “Words with Friends”, has now come out with its new title for Android Market.

The game – Hanging With Friends, is a spin on the popular word game “Hangman” but with some difference. Here the players don’t have to deal with stick figure and noose, instead they have to find out the correct letter to ensure their animated characters stay afloat with their balloons. 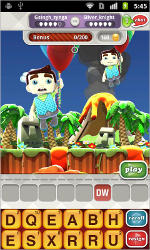 If the players make too many mistakes, they lose balloons and their animated characters don’t stay afloat. The game “Hanging with Friends” is all about making the right guesses and all the fun lies in getting the guesses right by the players.

The main features of the game “Hanging with Friends” includes – turn based design that allows players to play 20 games at the same time, users have the option of playing with their friends or with random opponents, and they can also stay in touch with friends and family with in-game chat messaging. The push notifications tell the players when it’s their turn to play and when they have nobody to play with, they can search for somebody through the Facebook connect.

Last but not the least, the game just sounds gruesome but the actual gaming experience is much better.