Recently, a couple of devices from ZTE including some smartphones and a tablet have surfaced online.

Seems like ZTE is working on a new smartphone as an announced ZTE smartphone with model number ZTE Z851 has now received WiFi certification from the WiFi Alliance (WFA).

As per the Wi-Fi certification, the ZTE Z851 will support single-band Wi-Fi a/b/g/n (2.4GHz) and Wi-Fi Direct connectivity features. Sadly, the listing does not show any specifications except that the device will be powered by Android 7.1.1 Nougat operating system. The listing carries the certification ID WFA71784 and the date of certification being 8th May 2017. 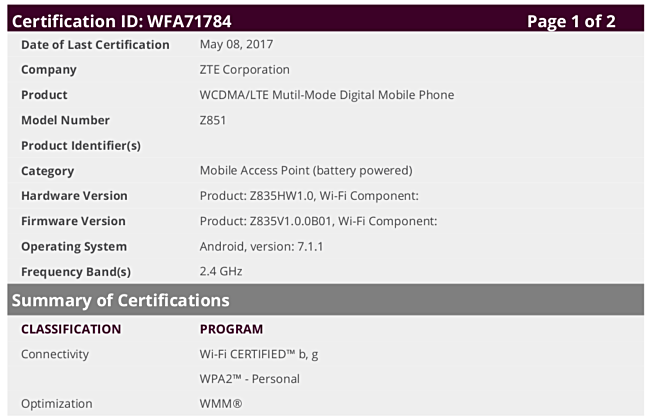 Sadly, no more details about the smartphone are known at the moment but since the device has started taking the rounds online we expect more leaks to come up in the coming days. We will keep you posted once we get more updates on this.

Recently, a couple of devices from ZTE including some smartphones and a tablet have surfaced online. Last month, ZTE smartphone with model number ZTE Z839 and ZTE Blade L7 have also received WiFi certification. ZTE’s another smartphone which goes by the model number Z971 also received Federal Communications Commission (FCC) certification. Prior to that, ZTE Z986 was spotted on GFXBench benchmarking website which revealed some key specifications of the ZTE’s upcoming device. The ZTE tablet which bears the model number as ZTE-K92 also got the Bluetooth certification from the Bluetooth Special Interest Group (SIG). So we can say that the company is preparing to launch several devices in the coming days. We have to wait to see what has the company in stores for us finally.